German paragliders are a distinctive brand, well known to pilots for their comfort, reliability, and easy-going nature. "Mistral's Intermediates have been a worthy embodiment of this dignified approach to designing and refining paragliders for many years. But to focus only on comfort and safety at a time of fore-edge fishing lines and a mad race for flyability is to lose the market. I wonder how Swing will solve this contradiction? 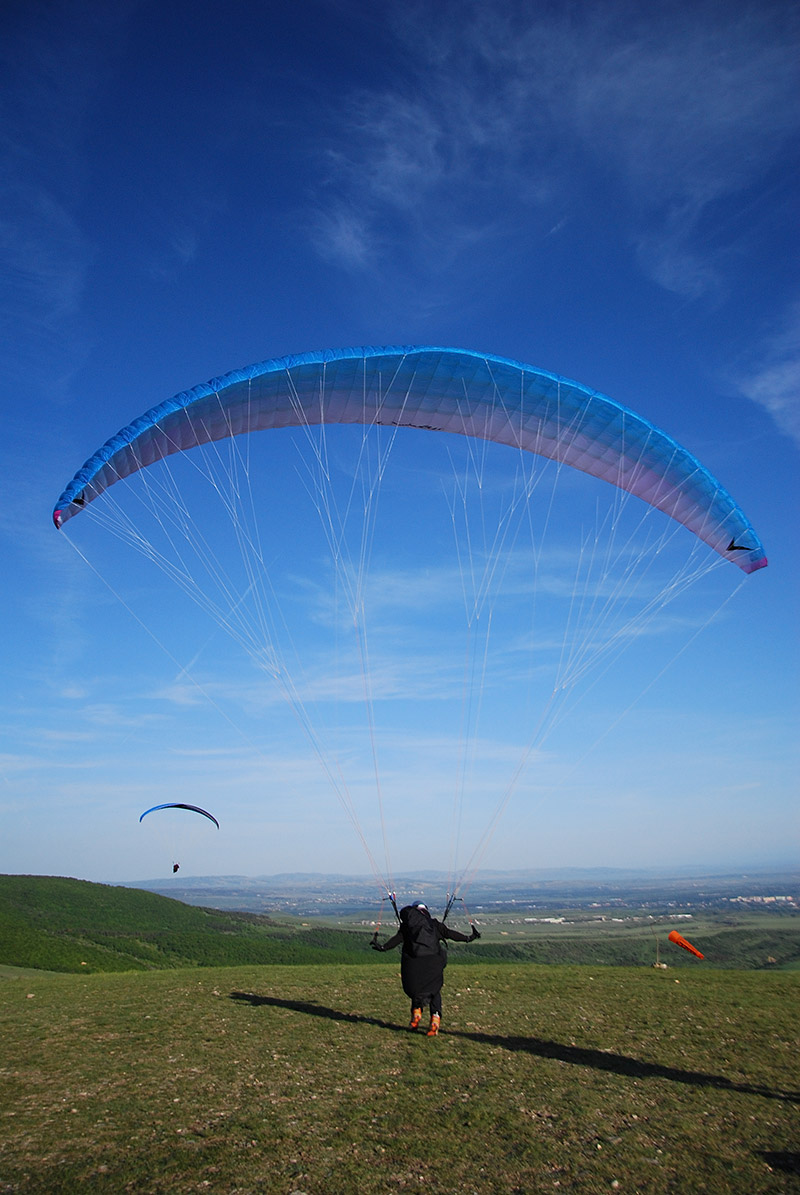 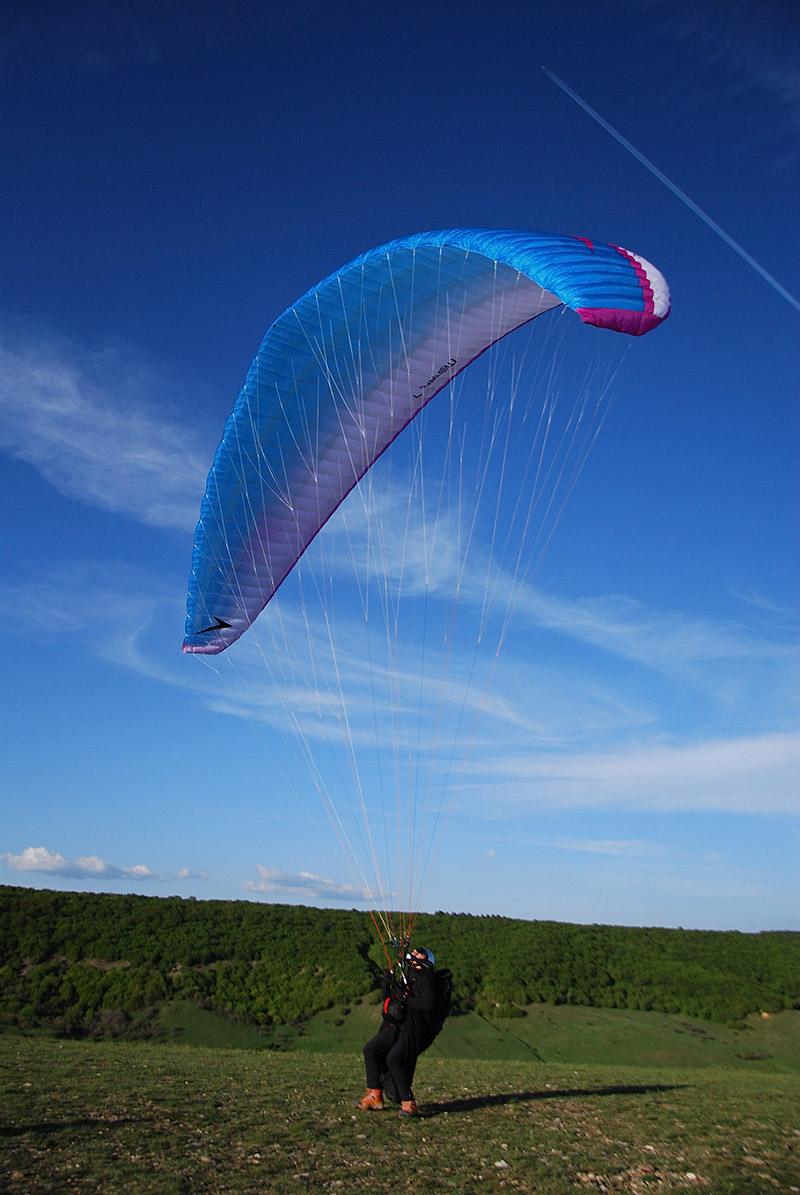 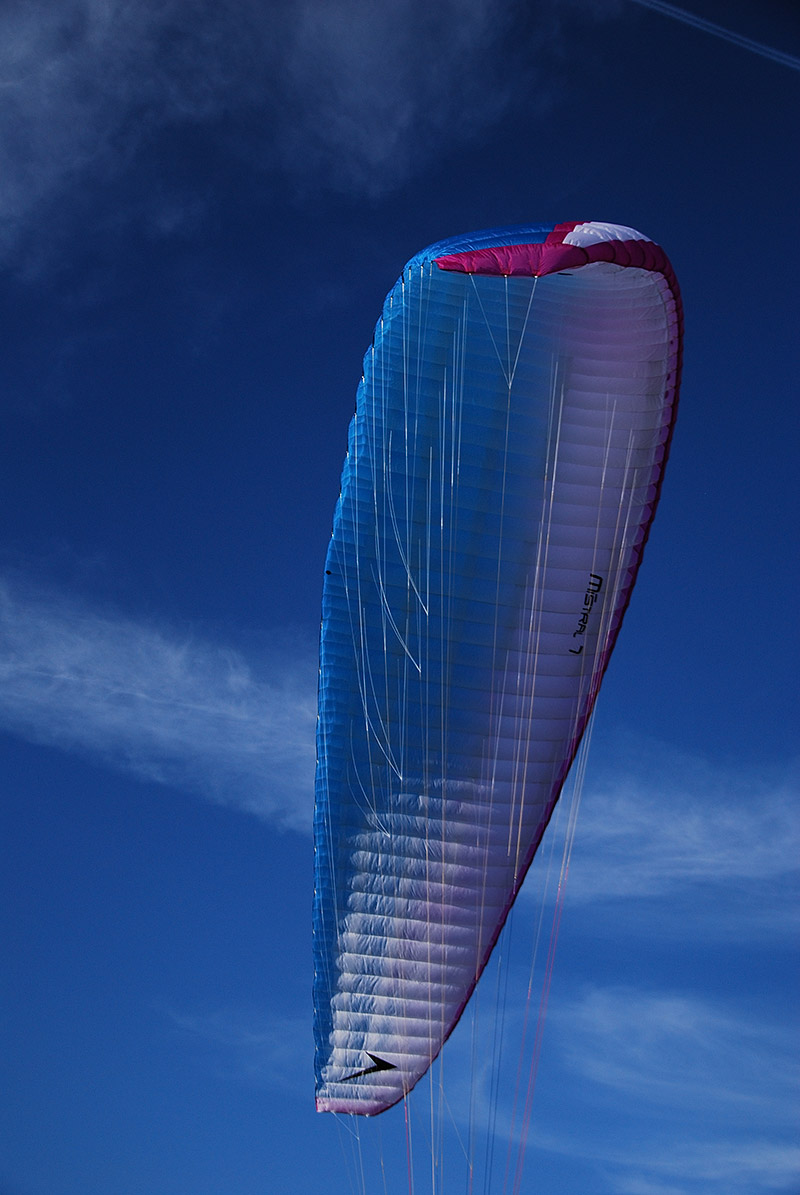 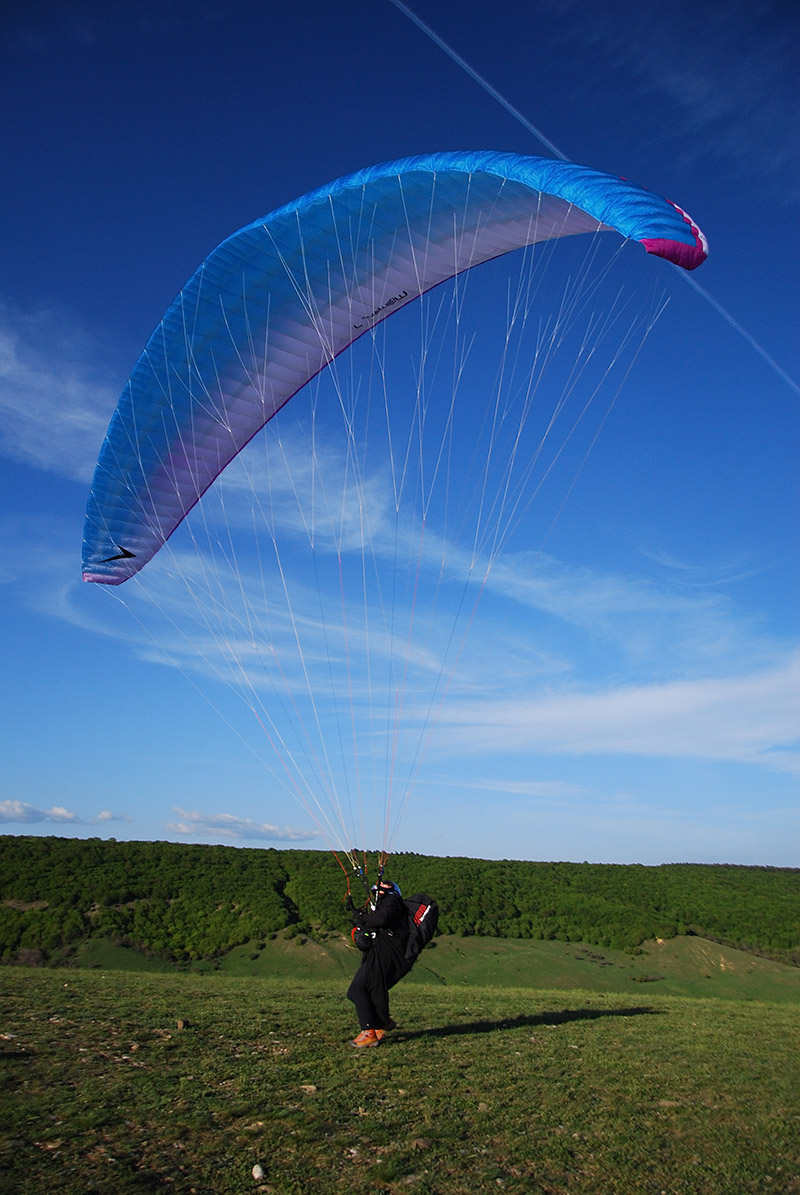 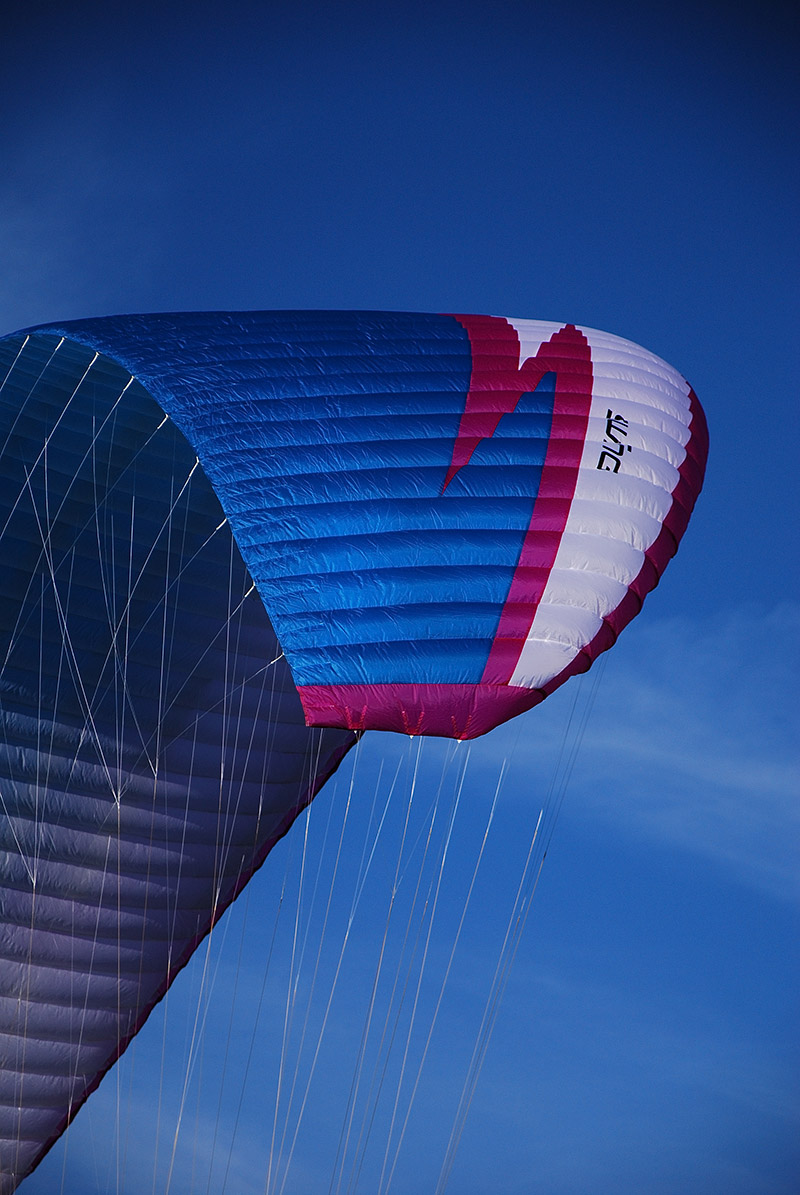 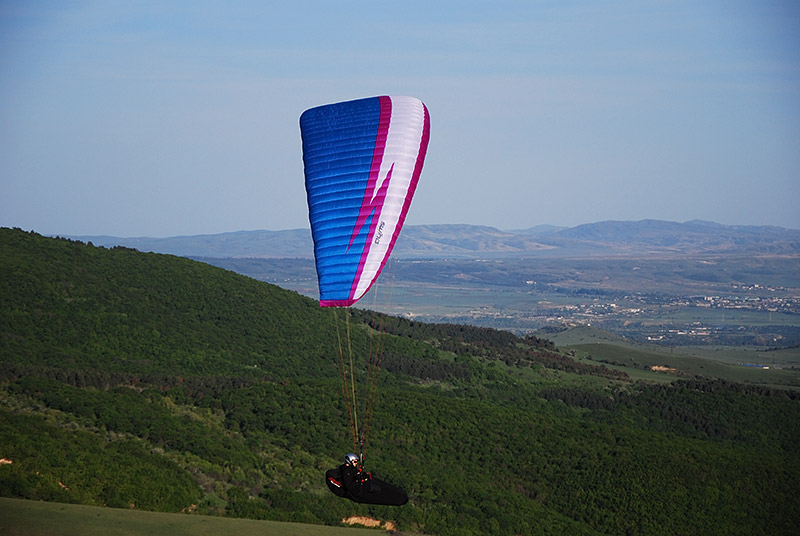 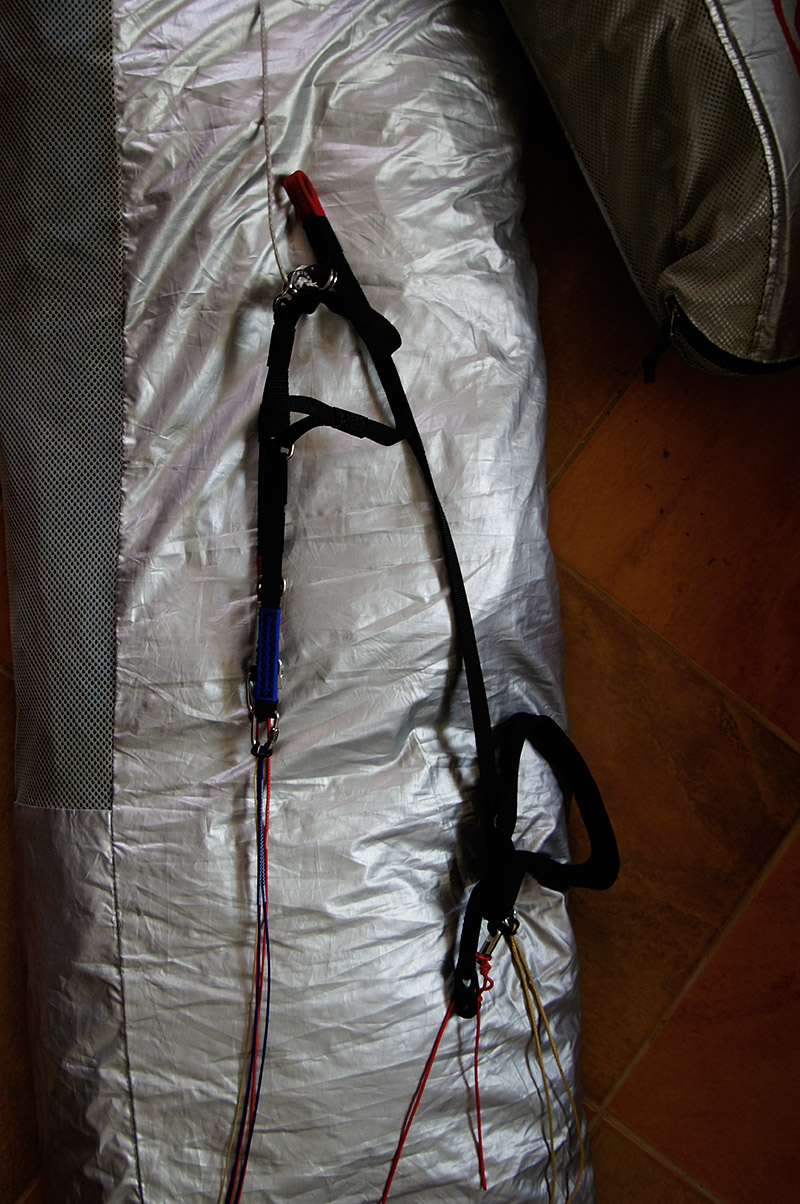 The ambition inherent in the Mistral7 shows itself clearly and unambiguously already when the wing is just unfolded on the ground in anticipation of the first flight. A respectable elongation for the EN B (5.5). High-tech, due to modern ambitious "intermedium" is present in full - it seems, designing the seventh Mistral, punctual German designer made a table of fashionable technical solutions and happily checked each line "add to Mistral7". The flitching in the leading edge, yes. Additional ribbing along the trailing edge - yes. Thin-thin, unstitched slings along the upper tiers - yes. Narrow loose ends - yes. Two slings per A-row - ja-ja, naturlich! Quality bearing rollers and thick soft lyros in the gas pedal wiring - bitte shon! But it doesn't end there, either. The gas pedal wiring uses a plastic ball, which dramatically increases the force on the leg and shortens the leg travel starting in the second half of the gas pedal travel. The Mistral's sling scheme is extremely ascetic - A1A'1B3C2. On the bottom tiers of back rows there is soft unbonded aramid for some reason - probably for less entanglement of not numerous slings. Against the background of all these wonders of technology monstrously rigid paddles on the buttons, not optimized for sports grip, look a little archaic. However, it is not without minor miracles: the brake handles are marked with the letter L, which hints at the existence of the size grid of the brake handles. Good news for owners of huge brushes and thick gloves.

The shape of the wing is just as impressive. It is weird and unusual, and for a Swing it is a total break from the pattern. The leading edge is smooth and strongly rounded backwards, and the trailing edge is almost straight. Sharp, narrow "ears", almost like those of the Mentors. A decent elongation and an unexpectedly low arch, which makes the "ears" look to the side rather than down. The appearance of a sort of router-aggressor, but not a friendly after-school wing, what were the previous Mistral. Perhaps, in something the new Mistral resembles the legendary Septembers, Aprils, and Augusts of the now almost forgotten Mikhail Petrovsky. Those wings and in shape and volatility were more like hang gliders than paragliders... Rather aggressive coloring with sharp zigzags organically complements the brutal appearance of the new Mistral.

The start, work with the wing on the ground

Excellent with minus. We have to give this sluggish minus for a little more severity of the Mistral when working with it on the ground in turbulent weather than with typical "intermediates". The machine perfectly obeys the pilot, and that's why the pilot has to be a little more attentive than usual - for any wrong move will be taken literally by the wing. It is not a training airplane ready to forgive mistakes of an inexperienced pilot, but a more serious machine with a certain ambition in its design. However, a pilot with a minimum of experience with the wing on the ground will be a joy to fly the Mistral7, because it is so precise and pleasantly responsive to all the pilot's actions. There is a slight tendency to "pop", in a roll the machine tends to twitch, play with the load on your arms and body. To put Mistral7 on the ground with your ear can be done in one move, provided that the pilot has mastered this trick well. Keeping the wing above your head is not difficult due to the rather high sensitivity to control.

The previous Mistrals I knew were known for their easy-going nature, and I did not expect any impressive flying ability from the new Mistral. And in vain. Without losing the firm German reliability and comfort, Mistral7 turned out to be unexpectedly (for me) strong in terms of volatility. Ah, the Swing!

Volatility. It so happened that at the same time as testing the Mistral7 I was quite actively flying the Skywalk Chili3 and I was very impressed by its volatility. However, on closer inspection of the Mistral it turned out to be at least as good! The strongest impression of the flightability of the Mistral7 is its top speed. The speed increase on the first (rather light) gas pedal stage is about 6-8 km/h, which is already quite good. We press the second stage into the front fairing of the cocoon - and the gas pedal, perceptibly and sharply heavier (triggers plastic ball system Overdrive), accelerates the Mistral at 15-17 miles per hour relative to the balancing mode! That's not just a lot for an intermediate. It's a lot. At first I couldn't even believe my eyes, but several minutes of playing with gas pedal in laminar evening dynamics dispelled my doubts. It turns out that the top speed of the Mistral7 is about 55 km/h! And if you compare the Mistral with other "honest EN B" (i.e. not with the Mentor family of Nova), the Mistral has virtually no competitors for maximum speed. Aerodynamic quality of the Mistral is also at a decent level - flies comparable to the best representatives of its class, can compete with the EN C machines of the initial and maybe medium level. The rate of descent did not seem to me record low, but due to its high maneuverability the Mistral soars quite convincingly. At low speeds, there are no miracles - the minimum speed is the same as for everyone else.

Maneuverability, handling. At the level of the class leaders. Sensitivity to the work of hands and body is very high - but not yet so much as to become redundant for the "intermedia". Very pleasant sensation on a turn - the Mistral moves on a roll with precise, elastic movements, quickly changing a roll, but also easily fixing it if necessary. The brake pressure is very well matched, neither too much nor too little of it. As you lower your arms, the brakes get progressively heavier proportionally to the increase in the wing's hand-eye response. Weight response is similar; it is bright, precise, but not excessive. No lags or complicated transitions are found in the turn control - the Mistral perfectly "follows the hand", reacting to the pilot's actions almost instantly. At the same time in the movements of the Mistral there is no bad sharpness, inherent in the most sensitive and sharp machines with formal certification EN B. On the whole, I liked the Mistral very much, but it should be understood that such sharpness and sensitivity of wing reactions makes the Mistral quite demanding to the quality of piloting. It is by no means a training wing or even, perhaps, an "after school" wing. It is a machine for pilots who have already achieved a certain piloting culture.

Comfort, informative. It would seem that such a flying and maneuverable airplane should be harsh and uncomfortable. But no - Swing has managed almost the impossible, and to all the above advantages of the Mistral, you can safely add a comfortable, pleasant character. The Mistral reacts to turbulence without excessive harshness, monolithically. Throws and flicks are small in amplitude, but the pilot receives quite enough information. External disturbances create the same feeling of elastic, fairly soft reaction to them, which occurs when controlling the Mistral. In order not to praise it too much, I would like to point out that the Skywalk Chili3 already mentioned here reacts even more calmly to turbulence. In general, the behavior of the Mistral7 corresponds approximately to the middle of the EN B class. The Mistral's information value is also average. You can and should mainly be guided by changes in airspeed and pitch. The load on the brakes of the Mistral is less informative. By the way, in order to get a finer "feeling of the wing", I recommend to take the Mistral's brakes with two fingers in the swivel area in the currents and in turbulence, without putting your hand in the loop, which is not at all adapted for a sport grip.

Dynamics, power capacity. Average or slightly above average. The device is well padded in pitch, so an inadvertent speed gain does not lead to a powerful flip.

Very good. I was very much afraid of the problems typical for devices with lines - and I was glad not to find them. Folding the leading edge is easy enough. Along the chord the fold develops moderately deep - 20-25%. When folded 50-60% oblique pecking is developed moderately fast, its amplitude is also moderate - 40-50 degrees. The opening is commendable: the Mistral opens smoothly, gradually, and without a hint of ties. With a fully passive pilot deflection angle of less than 90 degrees, the loss of height - no more than 15-20 meters.

Perfect. Collapse develops along the chord moderately deep - about 30-35%. There is a sudden loss of speed, but the apparatus quickly returns to a position above the pilot's head, simultaneously opening up. the "ears" may remain folded for some time, sometimes it is desirable to make a couple of small movements with the brakes for the opening. The dive after opening is not too big, about 30 degrees. Horizontal speed is restored very quickly. Loss of altitude - 20 meters

Synthetic, unnatural flight mode for the Mistral. The load on the brakes builds up very quickly as the arms go down, as does the rate of descent. It is not easy to hold the machine in a thermal spiral with one brake clamped tightly, you have to work very precisely with the other hand. The actual undercut can be clearly detected by the noticeable drop in load on the inner hand and by the acceleration of rotation. This is accompanied by a moderate roll with rapid rate of climb.

Good with minus. The efficiency is not bad, but it is very difficult to find the stroke of the A'-string which makes the folded ears stable. Almost always the folded ears start to "flutter" in the stream, twitch and twitch, and these jerks are unpleasant in your hands and in the uncomplicated part of the wing. It is necessary to hold A'-risers firmly, clearly maintaining the chosen depth of their retraction.

Using the gas pedal in conjunction with the "ears" unfortunately does not remove the problem with mode stability. the "ears" continue to rinse in the flow.

No signs of spiral neutrality until the decline of about -10 m/s have been detected. The output is independent, fast, with a powerful "slide", which is desirable to compensate for.

The intrigue set by the very ambitious design of the Mistral receives an unexpected resolution. Yes, the flight characteristics of the test aircraft is quite in line with its design, and in terms of flying and maneuverability Mistral7 at the time of its entry into the market is almost no competitor. However, unlike the most volatile aircraft with formal certification EN B, Mistral7 corresponds to its certification class not only formally. It keeps what German aficionados of paragliders love, comfort and reliability. Despite my fears the machine does not have characteristic problems with unpredictability and sharpness of disengagement, which are characteristic of machines with lines in the leading edge. And in general, the character of the Mistral7 will not disappoint those who are familiar with the earlier Swing "intermediates". The minimum flight time required is limited by the rather high sensitivity of the subject and is about 25-30 hours. The range of applicability of the Mistral7 is quite wide - it does not look like this machine was created purposefully for flying in the mountains or on the plains. Such a good wing will do well everywhere!