Georgia is a pleasant relaxed hospitality, good wine and plentiful, good-quality, moderately spicy food. The Skywalk Chili3 that I tested is the brainchild of another culture, but in some ways this device turned out to be surprisingly "Georgian" - kind, generous to positive emotions and spicy exactly to the extent that it is pleasant... 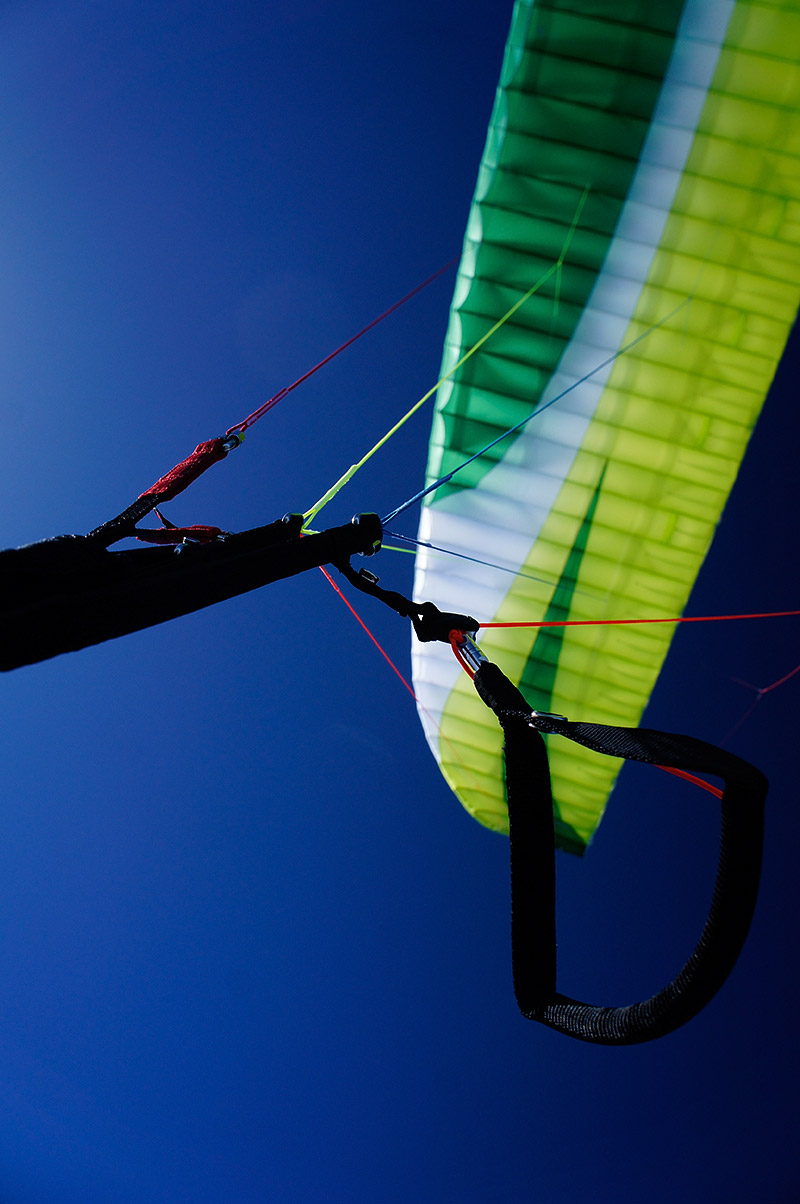 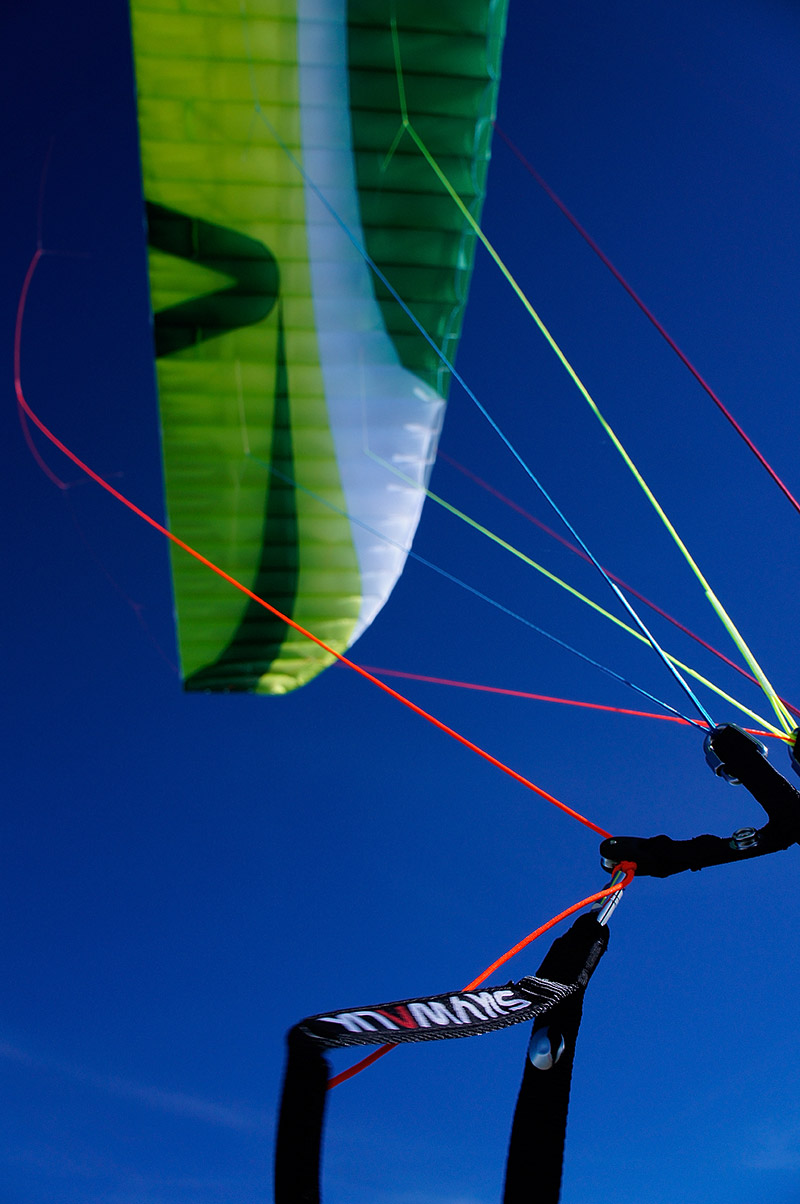 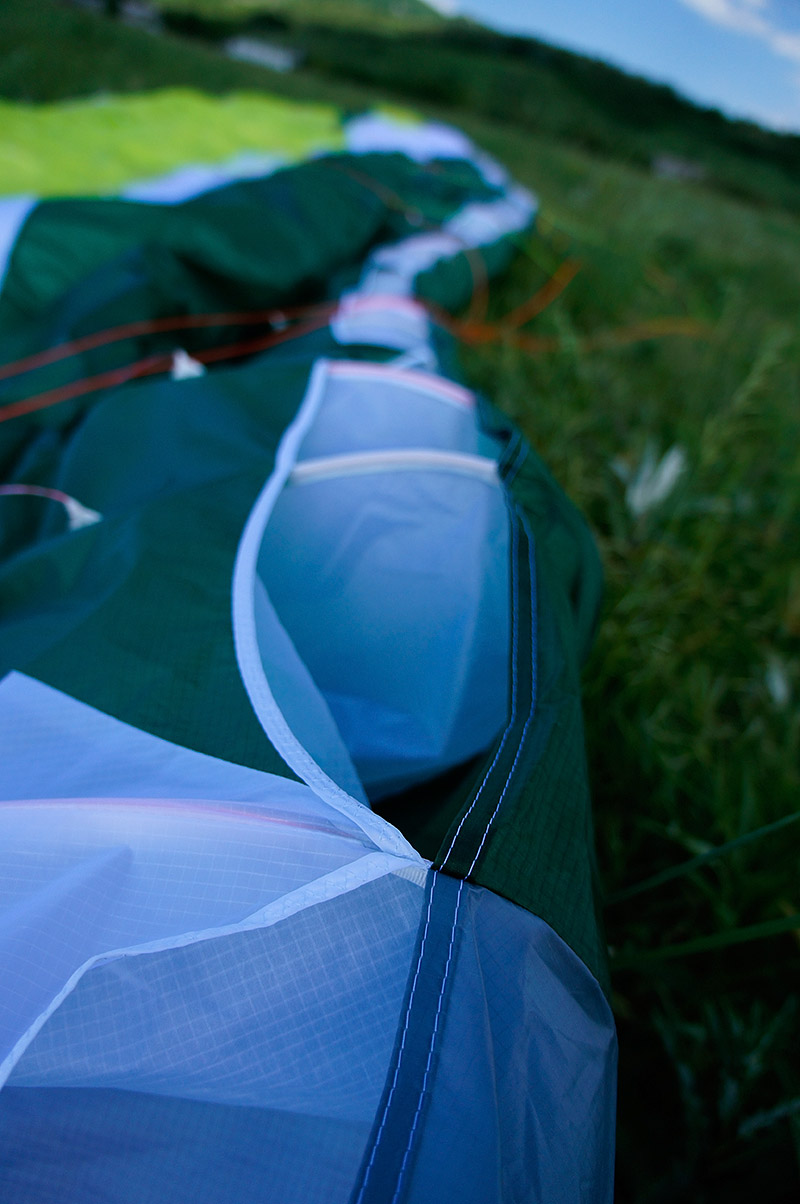 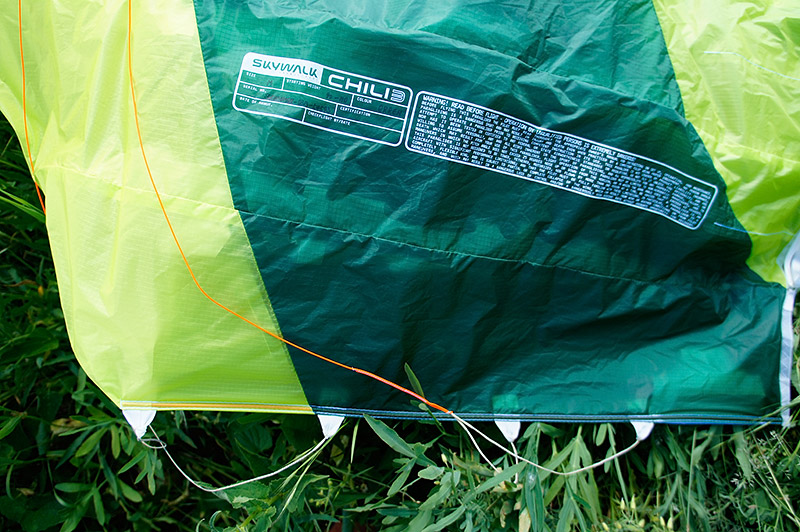 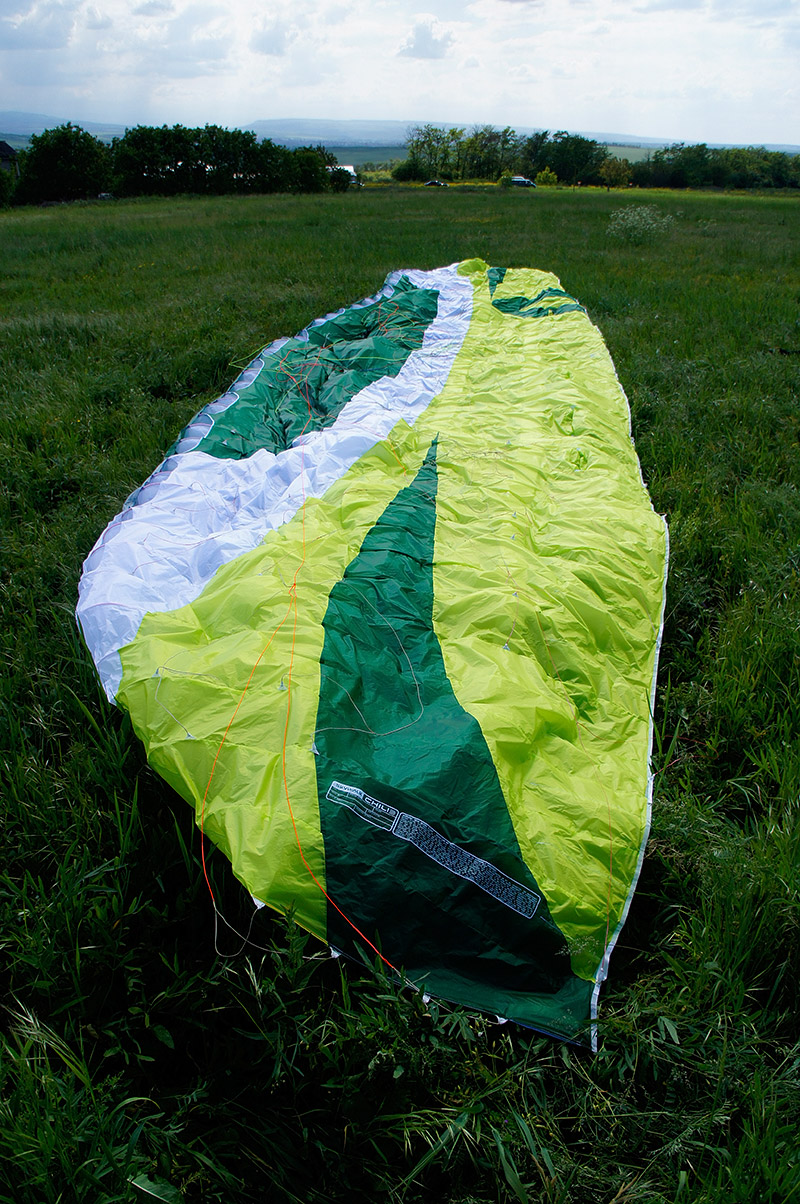 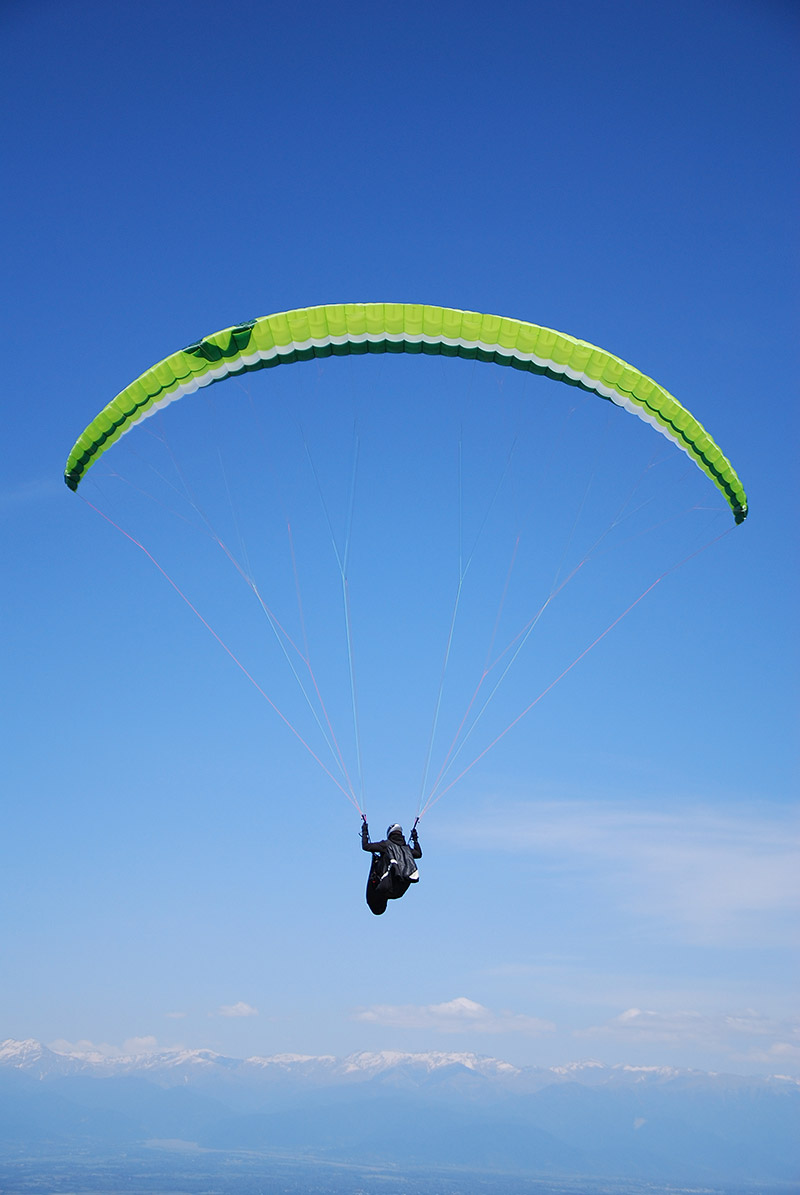 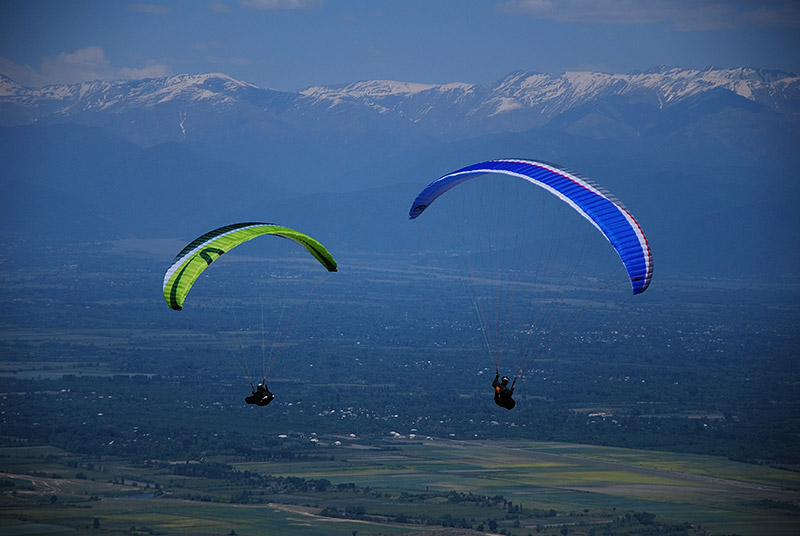 When taken out of the packing bag of shrill green color onto the same shrill green May grass, the Chili is at first a bit scary even with its hi-techness. Huge stiff lines running off the beautifully rounded fences about 30-40 centimeters back along the chord. Extra, also quite long lines around the C-rows (careful, stow in the concertina carefully!). Beautiful, with a slight noble predatoriness, wing shape. Elongation is quite reasonable for a modern EN B, without horror. The arch is good too. But the slinging seems to have fallen to a reasonable minimum: there are only two slings on the A-risers, and the slinging scheme is three-row. Slinging scheme: A1A'1B3C2. The slings on the upper tiers are mostly unbonded, which of course is no longer surprising, but still impressive. The ends are narrow (15mm) and very good quality. Pleased by the slippery Liros in the gas pedal wiring and the neoprene pouches for the lower rollers.

Flying. Impressive! Perhaps, Chili3 is a serious claim to leadership in the EN B class according to "volatility-comfort" criterion. It is a very good wing in its own right and worthy of all praise. It's been a long time since I've seen such an effective gas pedal in the EN B class. It is light enough, but already on the first speed increase is about 10 km/h - the figure, typical rather for some "performance". Moreover, you can actively and even brazenly use this flight mode - calm character of the doppler and its high resistance to collapses allows not taking your foot off the pedal even in quite serious turbulence. Chili also behaves perfectly in the streams: you can spin tightly, narrowly, at high enough speed, without fearing for the rate of descent.

Maneuverability. The pleasant sharpness mentioned in the preamble refers primarily to the maneuverability properties of the subject. Pleasantly loaded brakes become pleasantly and predictably heavier as you lower your hands, driving the pod quickly and predictably into a nice, tight turn. The apparatus, without hesitation, quite accurately follows the hand. On the whole, the test behavior on the turn is notable for some special "transparency" - getting acquainted with the wing in the complicated conditions of the unfamiliar slope did not take a minute of getting used to it, I found a common language with the wing almost immediately, right from the first thermal. Chili's reaction to weight is calmer, but clear, understandable and predictable. The decrease as the radius of the spiral narrows in Chili is small, which is a sure sign of the wing's good volatility. It is easy to see the signature Skywalker features in the turn of this wing. The short push with one hand leads to a fast turning of the wing above the head and an almost instantaneous change in the radius of the spiral. You get the feeling that you can screw into the flow as narrow as you want without fear of derailing - and this feeling is close to the truth. I suspect that this behavior is mainly due to the profiled holes around 80% of the chord, called the buzzword "jet flap," which is a kind of analog of airplane flaps.

Comfort, informativeness. I was expecting much more insidious and ambiguous behavior from a machine covered with long lines. Fortunately, I was wrong. It seems that Chili's designer managed to combine in one and the same apparatus the flyability of a wing with fishing lines and the sane, comfortable and predictable behavior of a typical "after school" wing. During several hours of en-route flights, the Chili noticeably twitched overhead only a couple of times. For the most part, the Chili "swallows" the turbulence, transmitting exactly the information to the loose ends and suspension, rather than chaotic jerks and kicks. For an EN B class machine, the Chili's informativeness is slightly above average - the very pleasant sharpness that was put in the title of the test drive. The device does not transfer something unnecessary, but what it transfers, it informs the pilot accurately, clearly and quickly. For the intermediate with route ambitions - just right!

That's pretty good. I can't believe, that it could be so good and simple in such a flying wing. It is hard to extend more than 20% of the chord. Asymmetric 50-60% wingspan is almost instantaneous, with just a gentle bounce, and then the glider quickly but smoothly recovers the original flight mode. And not the slightest tendency to "tie"! Rate of departure - less than 90 degrees, pitch deflection - 40-50 degrees, altitude loss - about 20 meters.

Perfect. There is a slight, barely noticeable tendency to parachuting, but this can be forgiven because of the swiftness and smoothness of the subsequent wing unfolding and rate of climb. Loss of altitude at maximum 20 meters.

Excellent with minus. The first to take off is the ear, which is unusual in some performance and high performance circles, but not so far in the EN B segment. At the moment of losing the last few wing sections the load on the hand drops noticeably, and the machine begins to "slip" in the turn, signaling the proximity of the negative spiral. The exit is smooth and with a moderate roll. We must give a minus for relative ease of this mode - if you want or know how to make Chili3 fail it is not a problem, which means that there is a probability to get this mode unwittingly when working in difficult thermals.

Excellent with minus. In the 2-line A-line machines the size of the retracted ears and the behavior of the machine depend on the depth of retraction of the ears. It is easy to overdo it with the Chili3. On my first try I got "super ears", which furiously faded in the stream, not allowing to hold the mode for a long time. But with moderately retracted A'-string the "ears" behave just exemplary: very stable, but quite effective. They open on their own, with a lag, but sharply enough.

Never try to pull this trick if your "ears" are too big! It becomes very unstable, and I know this because I tried in vain to use the gas pedal to feel the stable descent when the big ears were folded. The gas pedal only made the wing's behavior worse. However, if I used the gas pedal on the small wingtips, the performance is stable and efficient as far as the rate of descent is concerned.

Skywalk seems to be on fire right now. For its surprisingly serious flyability, the Chili3 is extremely easy and comfortable. You just take it and fly it, not really thinking about what to do or how to do it. At the time of writing this test drive, Chili3 has only one worthy competitor: Swing Mistral7. Barely beating the Chile in maximum speed, the Mistral is also a bit more demanding for the pilot. The Chili3 is the wing for those who want a fast, comfortable and safe introduction to the world of route flying. The passive safety is so great, however, that it can be recommended to graduates of flying schools, and with some restrictions, even for training. Minimum flight time required is 5-10 hours, no more.

Thank you to Sergey Shelenkov, the representative of Skywalk in Russia, for providing the glider for the tests.