A rare beast: a lightweight three-row with A.R. of about 7 for mountain flying. 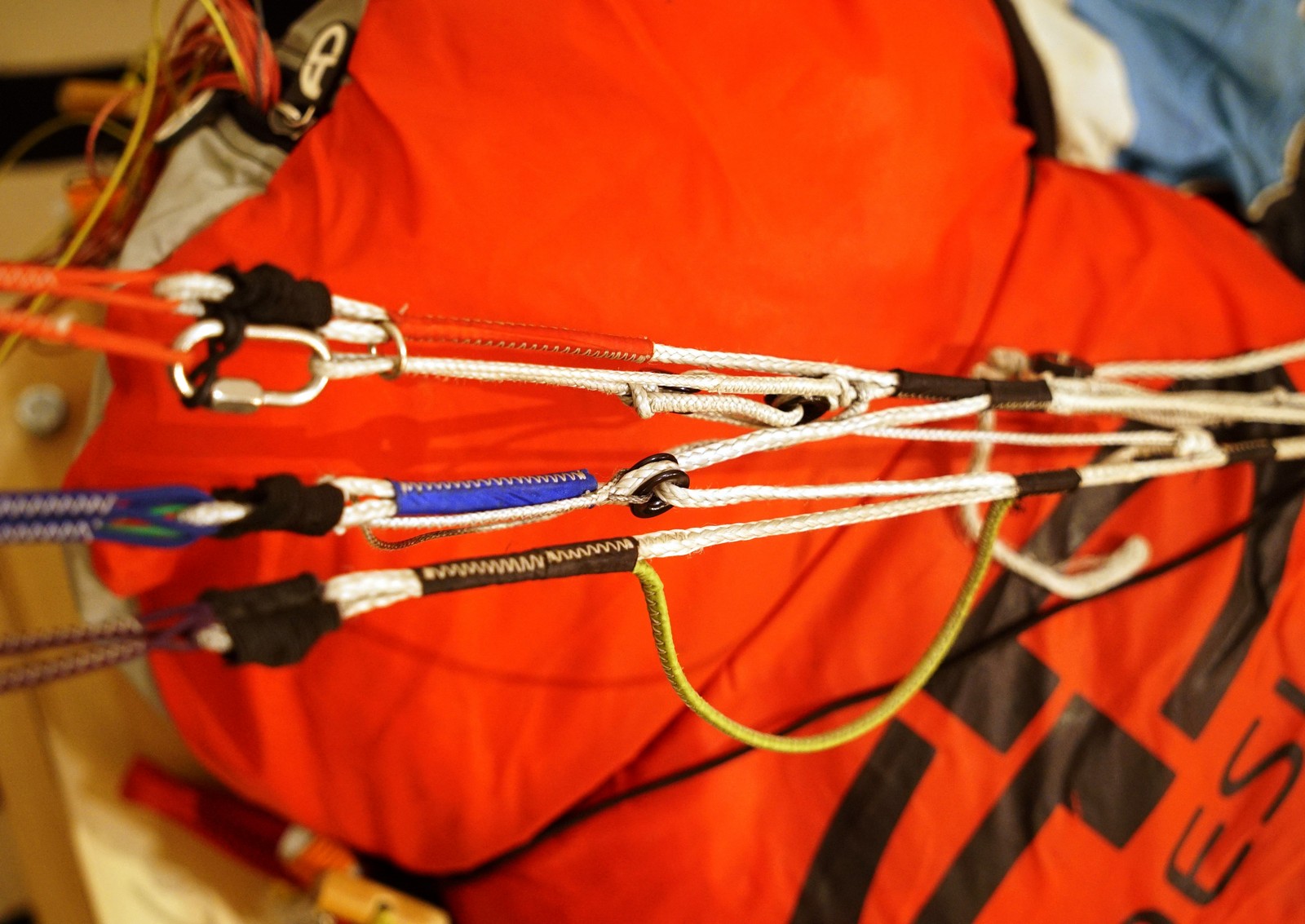 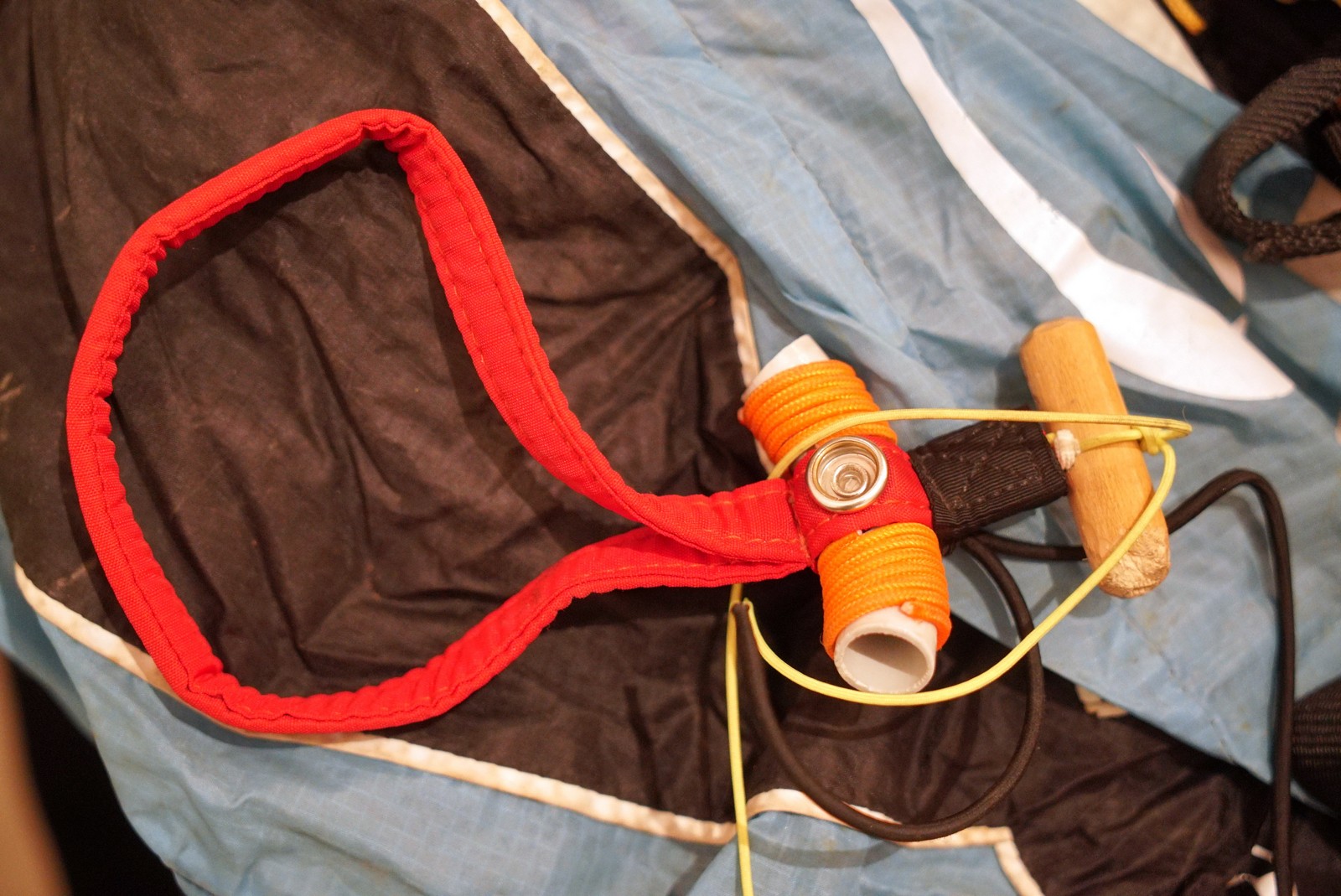 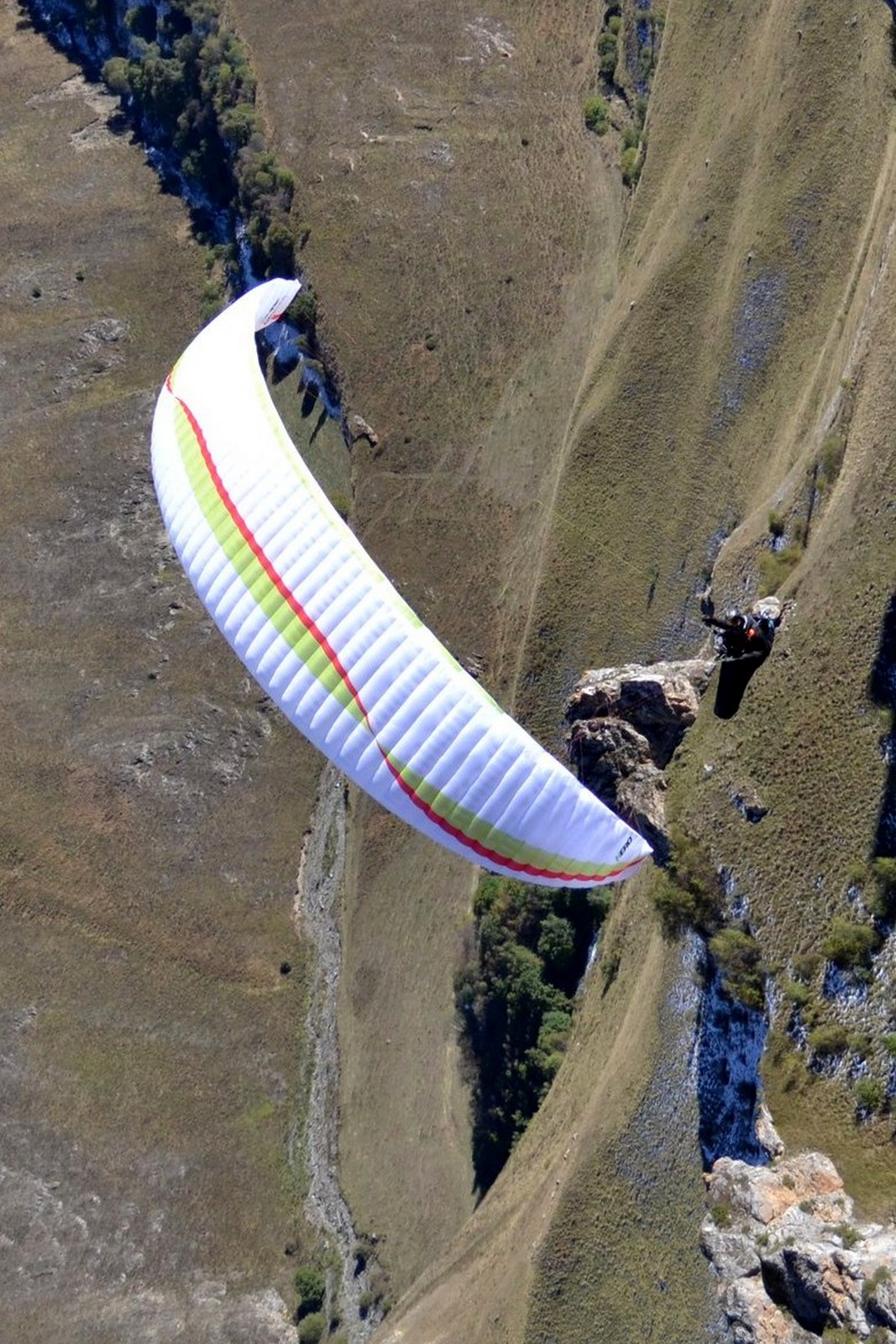 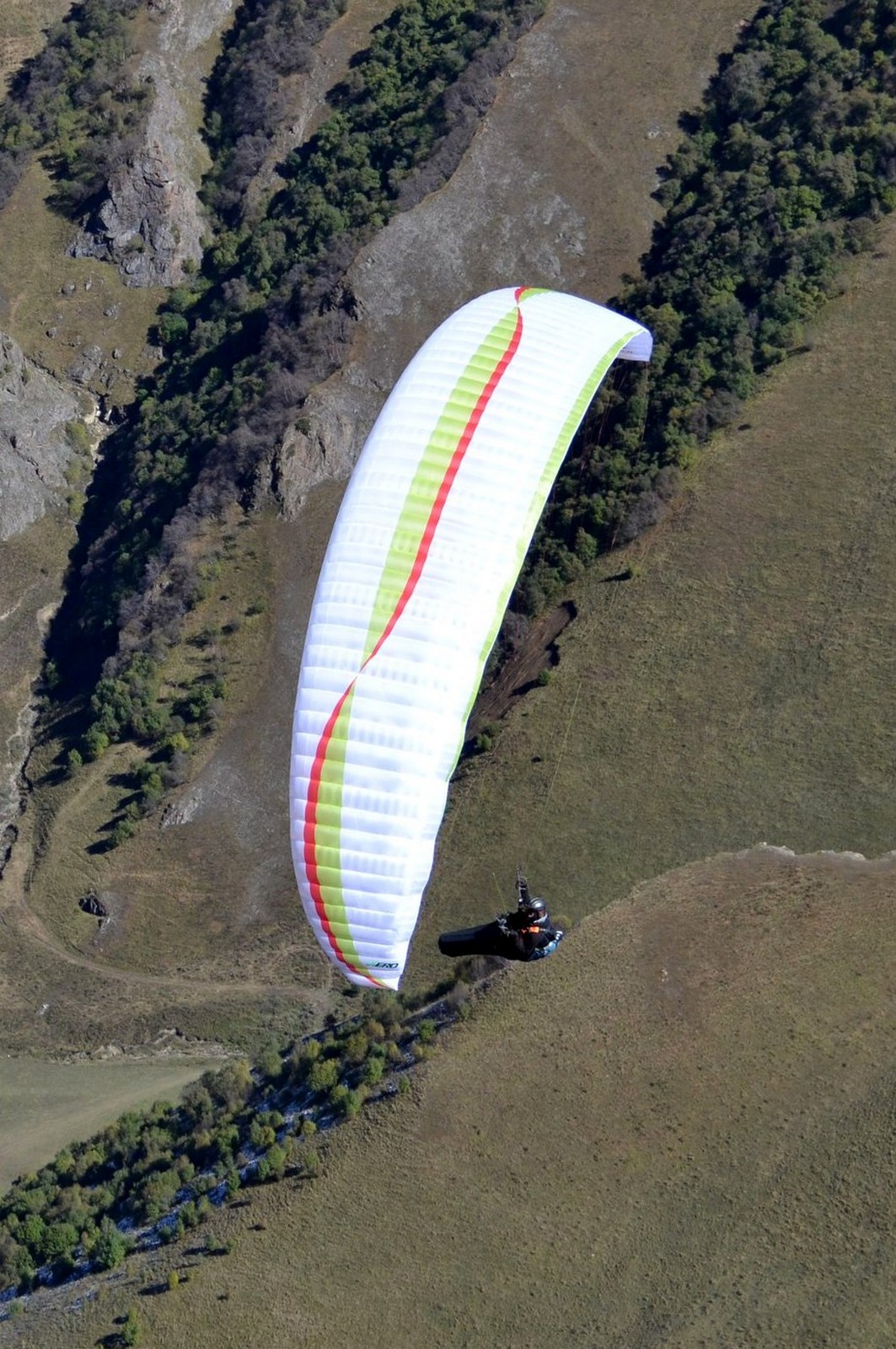 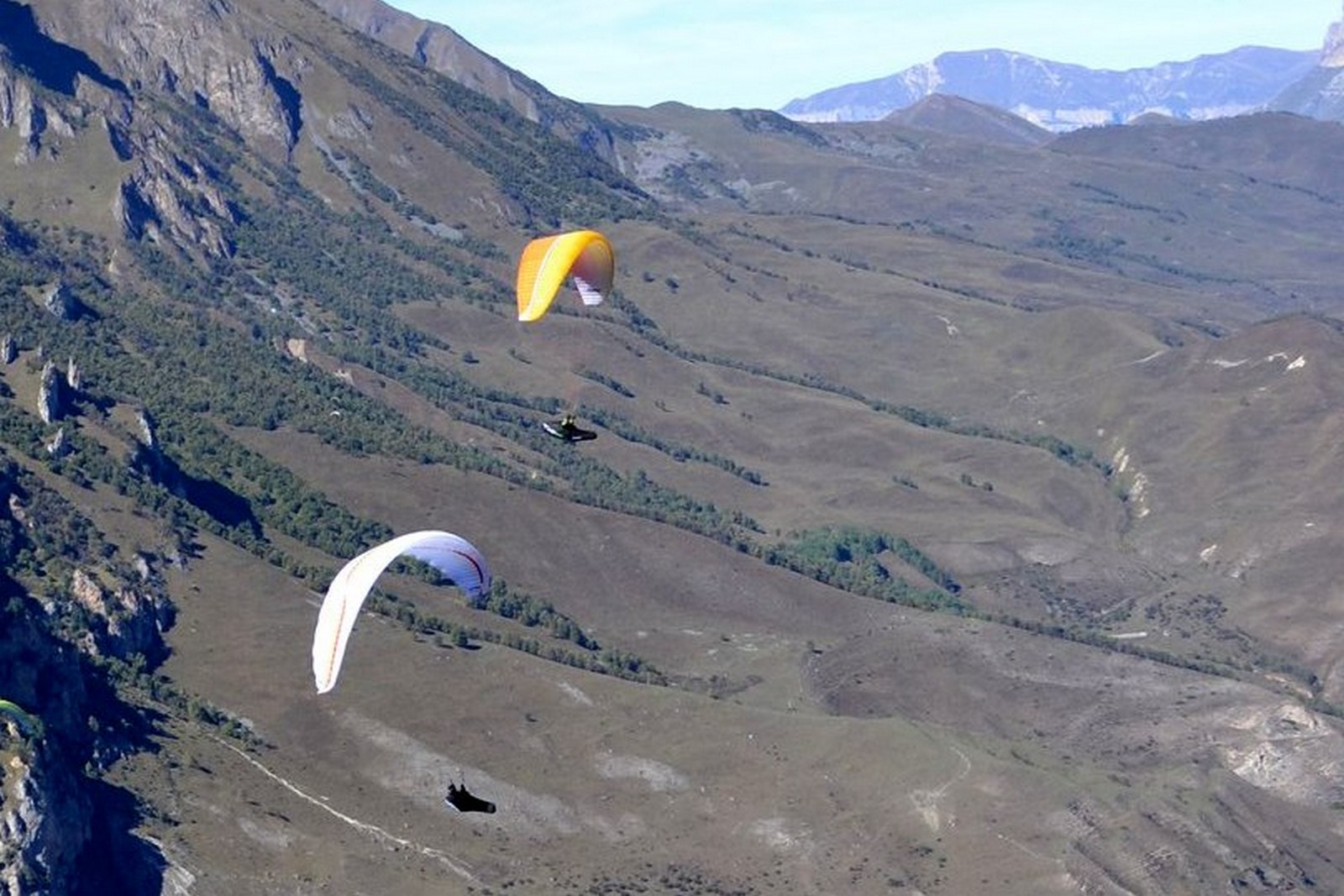 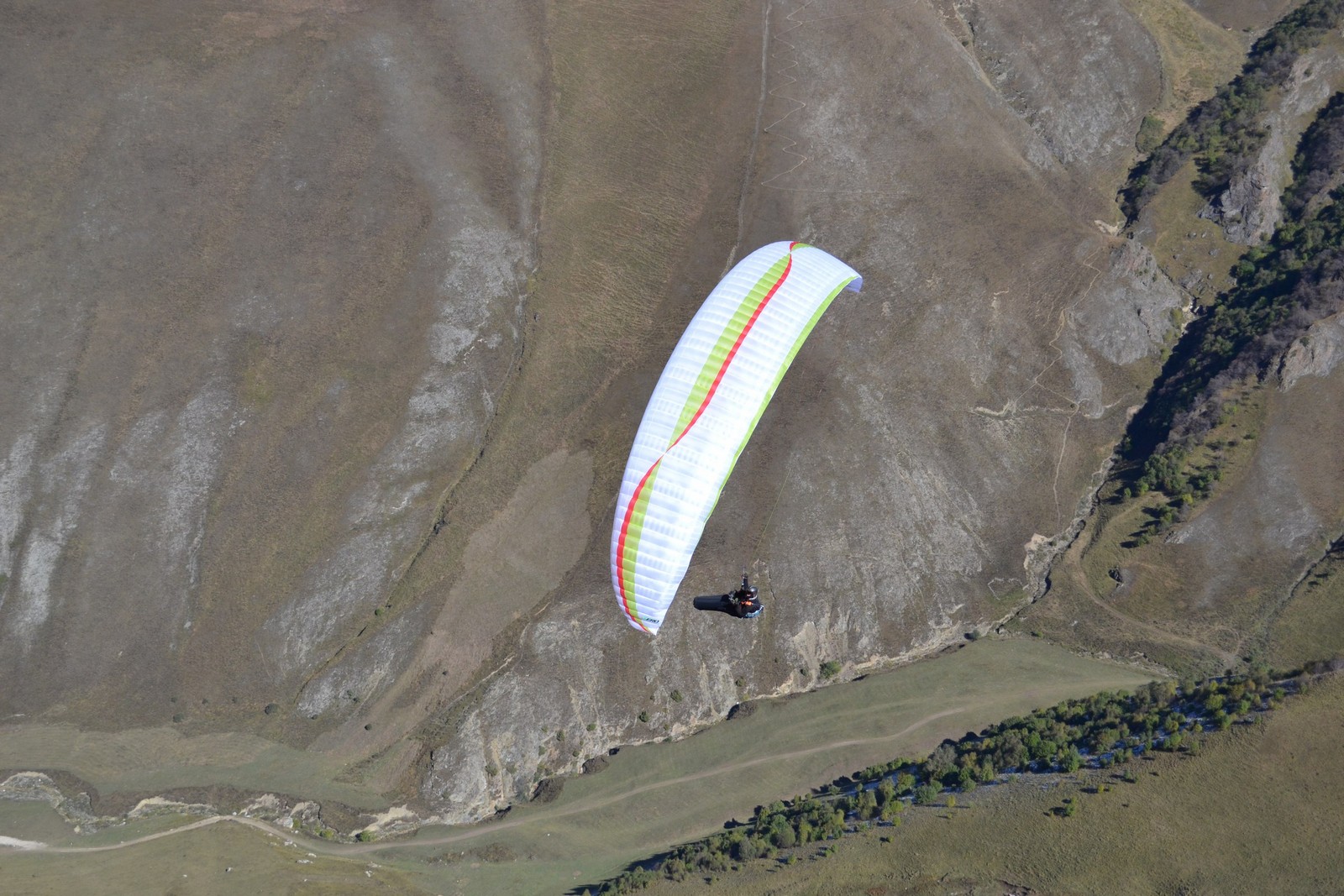 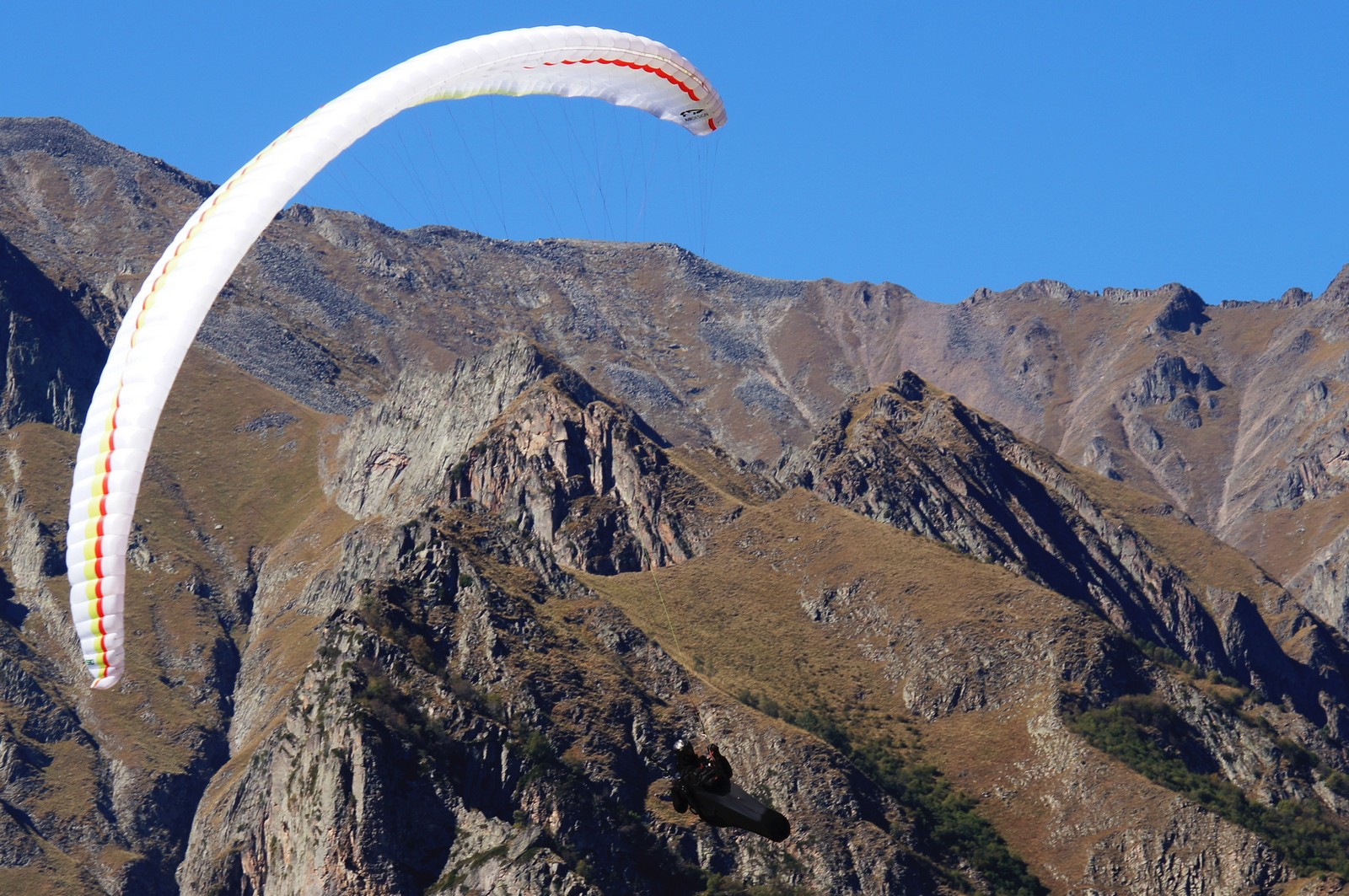 Size M, fork 90-105kg. Weight 3.2kg (actually less - 3.150). With the concentrina about 3.250. The concentrina is small on ½ wing, very handy. It could be made from an even thinner cloth. You can see the basic specifications on the manufacturer's website. The loose ends are leros ropes. The front row is highlighted in red. Everything is clear and straightforward - no tricky stuff. The brackets are thin and very comfortable - I didn't change them for my old ones. I only added the control sticks, I'm very used to them. These have great stitching on the dagger, just plug it in, and that's it. The clutch blocks to increase the stroke are on a separate 10 centimeter leash. The factory set length is optimal for most pilots. I'm more used to flying with acro type rubbers and higher paddles. That's why I changed it. Didn't affect gas pedal performance. The fit is perfect in my opinion. The entire wing is made of the same denomination. The plastic reinforcement is only in the forehead.
I get a lot of questions about its durability. So, with over 50 hours of flight time, the condition of my fabric counts as almost new (the dust on the white seams is clearly visible). It's rusty and slippery. This is with very harsh use: more than half starts from sand, sharp rocks, bush. With regular dragging by strong winds on the same. So the longevity of the fabric, if it is inferior to the usual, it is insignificant. This is a question to ask experts. The lines are good, I have not torn any of them during the flights. I would recommend impregnating them - without impregnation they tangle quite badly.

I have flown over 50 hours, including 36 hours - Pamir-Kyrgyzstan, 2 hours - small SIV on Toktogul lake, 17 hours - competitions in Chegem, 3 hours - dynamic, 3 hours - plain. Conditions ranged from mild dynamics to narrow turbulent flows near the relief and rotor landings. At altitudes from zero to 7000m. Loading in three variants: bivouac over Pamir - 112-115kg. Tests breakages on Toktogul lake - 90-95kg. Competitions in Chegem - around 100-102 kg.
I have big experience of flying only paragliders Ozone Mantra 4 and 6 so I compare the handling and feelings with them. They are the same class, but not lighter and a bit shorter. I flew in a group, paying attention to glide and set up in streams with Ozone Enzo 2 and a little with Niviuk Icepeak 7

The lift in the doldrums was very easy. In Chegem without any problems I started in the flush approx. -2m/sec. After I had the glider above my head I had to run, of course the glider was fast. In strong winds I have a tendency to overshoot (in comparison with my 7kg Ozone Mantra M6). The power capacity is big, so I have to be precise. Precise running under the wing and braking. The characteristic feature of this lengthening is minimal slipping of ears under the slings. You should be a little more attentive before takeoff and there will be no problems.
The wing has high specific load and is fast. So, you should load Mantras at the top to be controllable, and Hero has high loading and it is better to load bottom-middle.

This one does not drift up when it enters the thread, but tries to cut through it at its own speed. You have to crank the helix earlier, otherwise you skip the core. The same downside of high speed, with strong overload: no clear suction into the stream (self-centering) must be controlled, otherwise it may slip off the stream. In the beginning, when flying on a heavily overloaded and unfamiliar wing it was a problem. When loading in the middle, the effect is almost gone, everything is in its place. The same Enzo 2/3 wings are so sensitive to ballast, that even an extra 2kg radically affects the flyability and climb rate (in Andrey Eliseev's opinion and experience).

Accelerator is not tight, after 2/3 there is a retracting balloon. Plus, they say you can make it even longer - there's an unstitched leash. Decrease at 1/2 of gas pedal -1.6-2ms. The gain at full throttle is about 15-17 km/h.
When flying together with two Enzo 2, there is absolutely no difference at balancing speed: speed and glide are the same. But at full accelerator, especially against the wind, the lag is already noticeable - these are wings of different class.

Control and behavior in abnormal situations

The mid-upper loading is sharper and easier to control than the Mantra M6, follows my hand and steers with more precision. The wing steers deep and true. Downwind handling is much smoother, closer to the Mantra. Middle of the fork is optimal.
I have made a few soft swells, negatives and asymmetries. There is a very distinctive step before the breakdown - not to be confused. You have to pull it to the full arm stroke and hold it for 2-3 seconds. The wing stops to almost zero speed, there is a very characteristic increase in load and then a sharp stall.
On exiting modes is similar to the Maptra M4. Soft, no tendency to roll over 90 degrees. It's even better accelerated on the way out so it doesn't stick to the ears. The same stuck ears are not a problem, even when not symmetrically, do not go into the slings and are easy to open. At asymmetry of more than 50%, there is a characteristic peck to the side of about 45 degrees.

The behavior in turbulence

I have not the feeling of a new wing, it is the same as the old Mantras. Warns in advance and very clearly. There was not a single massive uncontrolled collapse. Brake length is shorter than on the Mantra and this improves active safety - allows you to control the whole speed range up to stall without winding the line, which is very comfortable. The brakes themselves are very comfortable to load, there is no feeling of pulling a kettlebell.

The main thing about a wing like this: landing on a limited area. This is a D, with its own characteristics of a good glide and high energy capacity. A long glide along the ground without descending and rising several meters if you squeeze the brakes sharply. Participation in the accuracy competitions in Chegem is an excellent illustration. Rigging the suspension on the ground at 30-50 meters from the target and soaring 3-4 meters above it - the standard approach of modern wings with an elongation of 6.5. Otherwise it is not real to hit - flying over 70 meters. The Hero is no exception. It's important to know how to pump the wing properly, how much the wing lets you do. There are some wings which either jump straight away, or take away only the vertical speed. The brightest example is an old Aircross U-sport with extension 7: it never has landing speed less than 30 km/h. Hero's pumping is on the level or better than M4. Allows you to briefly bring horizontal speed to almost zero. On release it accelerates quickly with a slight twist. You have to pull at full arm stroke and hold for 2-3 seconds to break it. The maneuver is more difficult than on the short wings, but with a little practice allows you to land almost on the point without breaking. Better seen only in the M6, due to the large amount of plastic in the wing.

Once I got the Mantra M4 after the aggressive Aircross U-sport I was at first quite disappointed with the sluggishness of the wing, and then I was very grateful to it - so many times its behavior and dynamics saved my skin. When flying the Hero, I didn't have to retrain after my previous wing, or get used to the new behavior. The added sharpness of the controls.
Very comfortable, still the same predictable response and dynamics with much better handling. Great maneuverable machine with good active and passive safety. Not to mention its weight.