The SOL paragliders are the most reliable and long-lasting materials. "The Ellus4 Intermediat continues the worthy tradition of the brand. 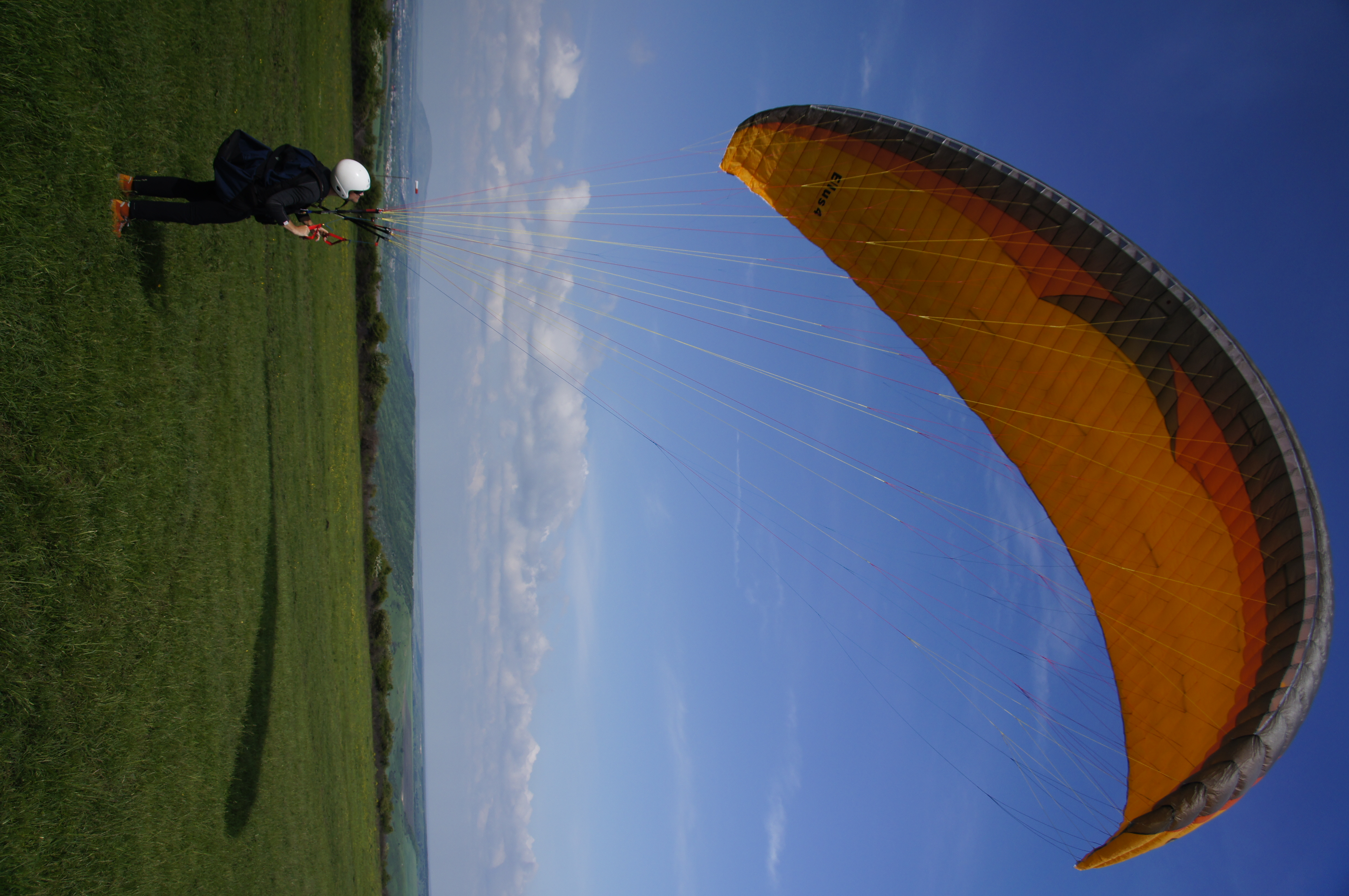 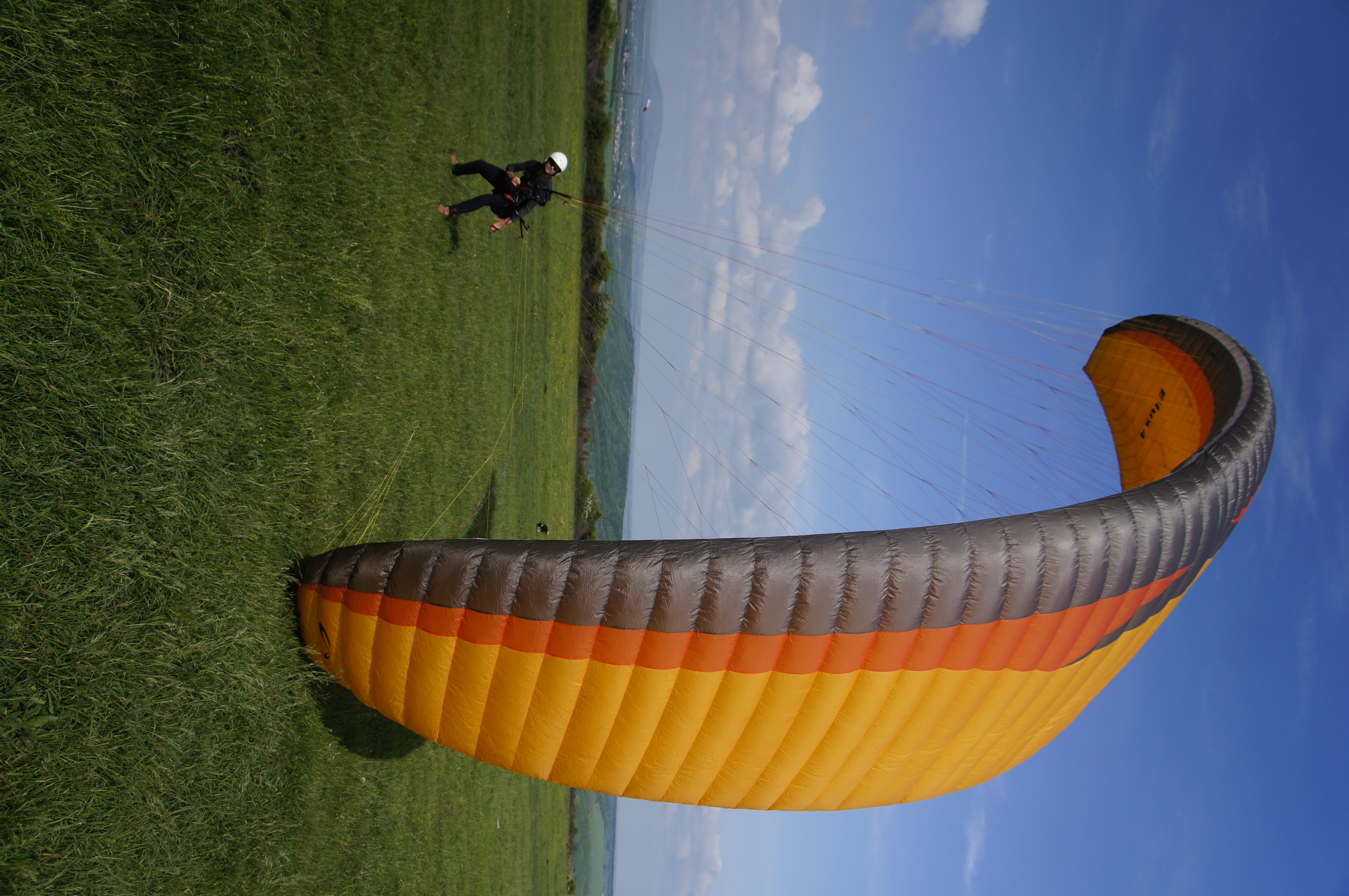 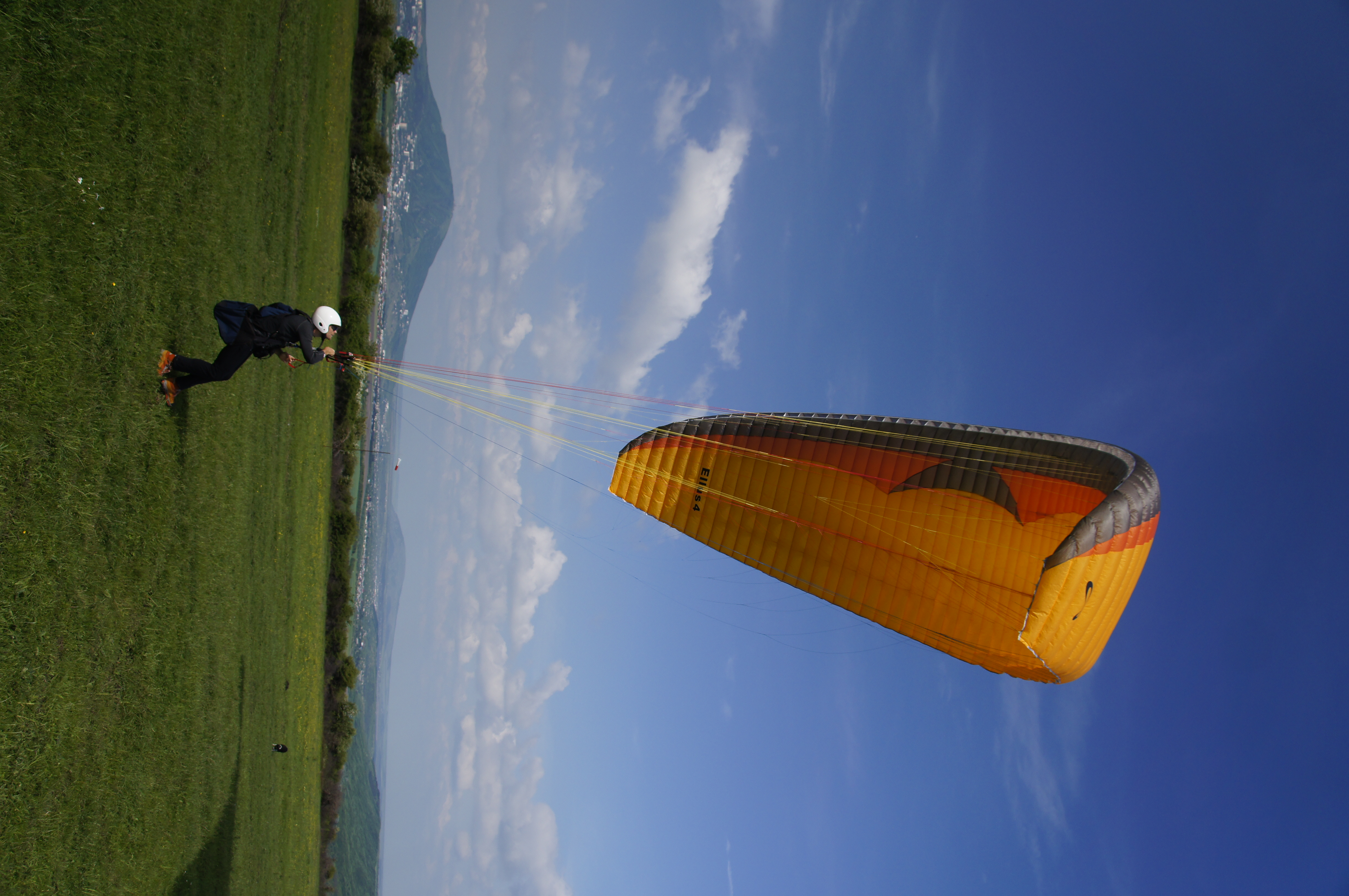 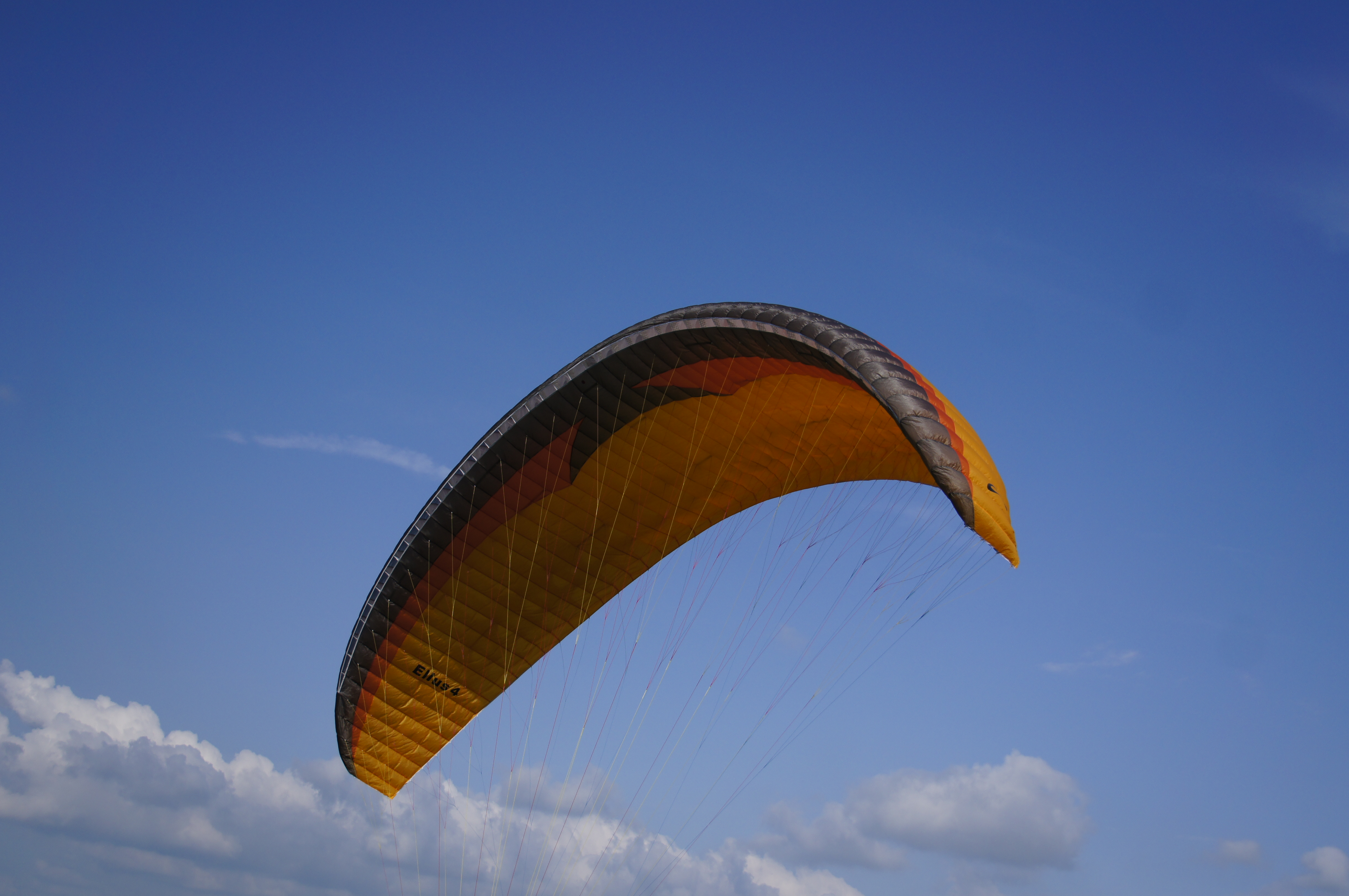 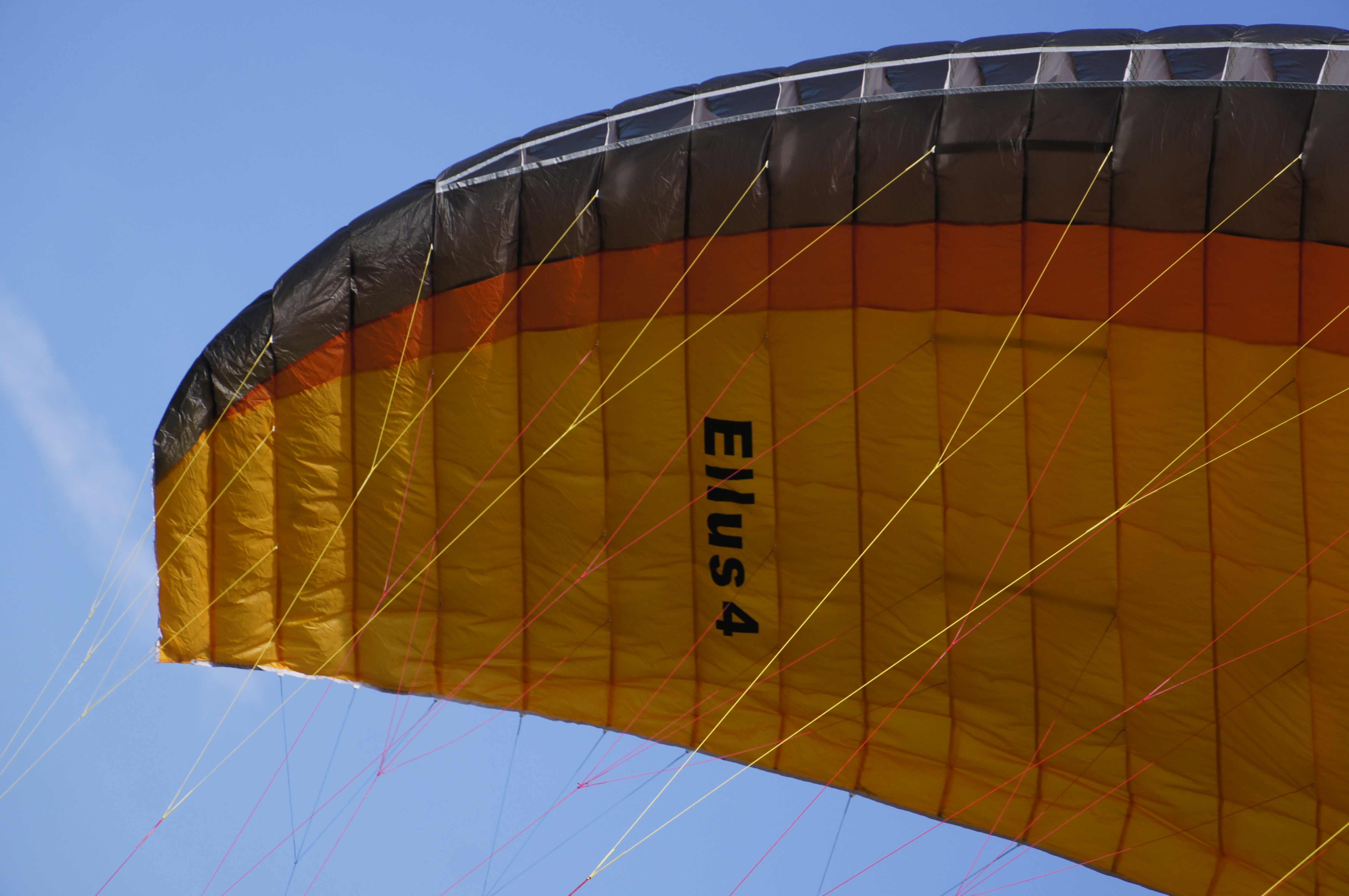 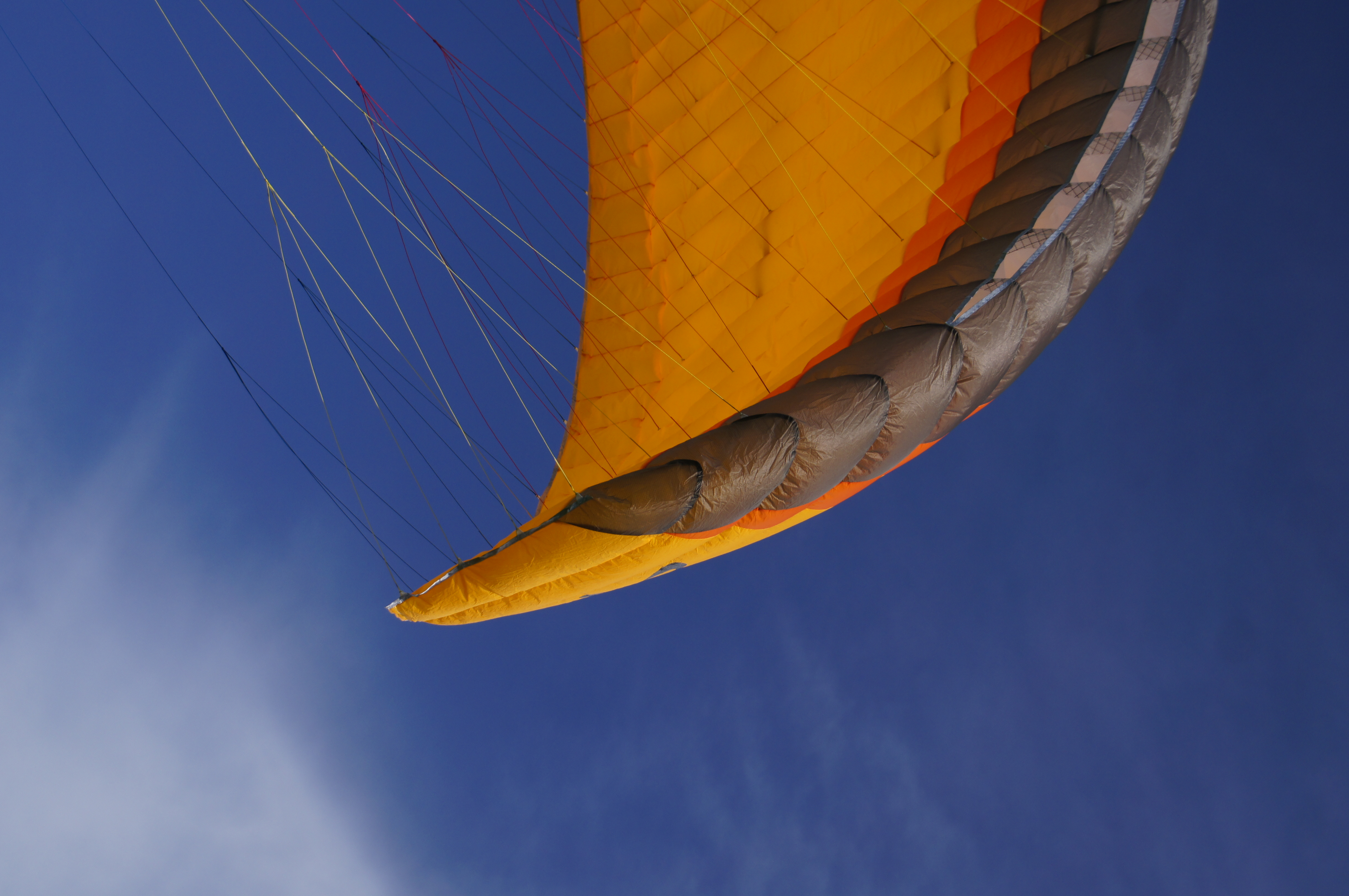 One of my long-time flying friends, examining the Ellus up close, aptly and succinctly described its construction by the word "semi-honest". For many years SOL was popular in Russia due to the abundant use of gelvenor and other mega-resource materials and a healthy conservatism in design, which ensured the easy-going nature of the wings. SOL is more or less faithful to this approach even now. The legendary gelvenor has been replaced by a lighter 40g/m2 WTX fabric. Yes, it's not gelvenor, but against the background of trendy "paper" fabrics with the density of about 30 g/m2 WTX looks very decent, providing the wings with definitely better durability. The wires in the leading edge are present, but very thin and short, and only on every second section. These lines have practically no influence on the glider's flight behavior, but make it easier to fill the wing with air and to start. The shape of the wing is rather conservative, which is pleasantly referring to the previous epoch of paragliding. No aggressiveness, no closed sections, classical trailing-edge flaps, little elongation - 5.29. The slings on all tiers are braided, more resourceful than the fashionable "braidless". The free ends are with a pretension to be trendy, narrow, but unexpectedly soft. The sewing and the quality of workmanship are traditionally sound, without criticism.

Flying. It's average level, no miracles. However, we should not forget that the Ellus4 was designed in 2011, at the very beginning of the era of fore-edge lines. Let's start with the maximum speed, which has absolutely normal values: the gain on the first stage of the gas pedal - about 6-7 km / h, on the second - no more than 10-12 km / h. The maximum speed, accordingly, does not exceed 50 km/h, that does not cause enthusiasm by the standards of 2013. Aerodynamic quality of the test vehicle is not bad, but it does not compete with the advanced intermediates and especially with the performances of Ellus. This is especially noticeable at the maximum speed, at which the Ellus begins not only to lag behind, but also "crumble" relative to its more volatile classmates, rapidly building up the rate of descent. The minimum rate of descent in straight flight and in a thermal spiral does not cause complaints - in thermals the Ellus4 will not lose to more modern aircraft.

Maneuverability and controllability. In thermal weather with complex flows it is a bit strange, but at the same time it is quite typical for SOLs of previous generations. Ellus reacts with some exertion, with a slight, but pronounced lag - and after a split second it turns in a turn with an unusual, rough movement. Something similar is sometimes felt on other wings when the pectoral girth is too wide open - but in this case it is exactly Ellus' specificity. A test flight with the same suspension on another manufacturer's "intermedia" proved this convincingly. The Ellus is not inclined to follow the hand, imposing a special rhythm of movements on the pilot, which you have to adjust to, to guess the right moment for corrective movements of the arms and the body. Sensitivity to control (both hands and weight) in this case is quite high, you should not move your hands too much on this machine. The situation is aggravated by the low load on the brakes in the upper third of their travel. The overall behavior of the Ellus reminded me of the behavior of some high performance aerobatics, particularly AirDesign Pure, of course, adjusted for the fact that it belongs to the intermedia. Controlling such wings is a joy - but only after you get used to the peculiar reaction to control.

In simpler weather the Ellus is more enjoyable. The unit responds to steering more linearly, with less lag and simpler transients. In the absence of pronounced chatter, the Ellus is no more difficult to control than other "after-school" machines - in fact, it is even more maneuverable than, for example, the GIN Atlas.

Comfort, informativeness. If the SOLs' signature drivability causes some bewilderment, the signature comfort is only a joy. In conditions of a thermal before thunder, the Ellus was doing very well, sometimes diving in pitch, while more serious vehicles were pitching up next to it. I have no problems with informativeness either - despite very good roll and pitch stability by today's standards, the Ellus transmits quite a lot of information to the brakes and noticeably "plays with" the speed. The Ellus's input is a little rough - it feels like you are flying into a wall - but after a short hesitation the plane breaks through the periphery of the stream convincingly. It's interesting that Ellus tends to flip out when entering narrow streams - it's behavior which is classical for paragliders of mid 2000's, but not very typical at the time of writing this test drive.

Dynamics, power capacity. Normal average level, without miracles. And that's probably a nice thing. The Ellus does not scare its pilot with sharp and powerful roll and pitch motions - it does not store too much energy, and the rate of "pumping" speed to altitude and back is not too great in this wing.

Perfect. Everything is as it should be: progressive and smooth ascent and moderate (40-50 degrees) ascent. Heading deviation is small - less than 90 degrees, but the Ellus loses not so little height, about 20-25 meters. In general, the behavior on the mode is very clear and predictable, which is very nice.

It's great. I could complain a little bit about the Ellus's abrupt loss of speed and quite strong wing back drift at the beginning of the fold, but its feedback behavior is commendable. The dive is not large in amplitude, the wing shape and horizontal speed are quickly recovered. Sometimes after the collapse 2-3 sections of "ears" may get stuck, but this has practically no effect on the Ellus's flight. The loss of altitude at the exit of the mode is about 25 meters.

Good. No problem with the efficiency of the mode and stability of the folded ears. But the "ears" do not want to open in any way! Vigorous movements of your body weight to the right and to the left cause only swinging, but not opening of the ears. You have to remember the old days and start working with the brakes, which do not open the folded tips at the first attempt.

Same high efficiency, same problems with opening after releasing the gas pedal. The mode is stable, you can use it without restrictions in strong chattering weather.

No problems with spiral neutrality found. "Slide" at the output is moderate, transients are smooth.

Against the background of the most modern EN B class machines the Ellus4 looks a bit old-fashioned, which is partly explained by the year of its development. But who said that old-fashioned is a bad thing? Well, yes, in terms of flyability it doesn't look like a star in the sky, and its maneuverability is not outstanding in its class. But the Ellus behaves much more easily and understandably than many of the more advanced wings with the EN B label. The malleable disposition and durable (by today's standards) construction are the main trump cards of this humble Latino workhorse. I think the best use for the Ellus is to finish flight school and go flying solo for the first time. Minimum flight time required is 5-10 hours.