An ambiguous, but in many ways interesting tandem from the manufacturer of the legendary Mystics and Evolutions. 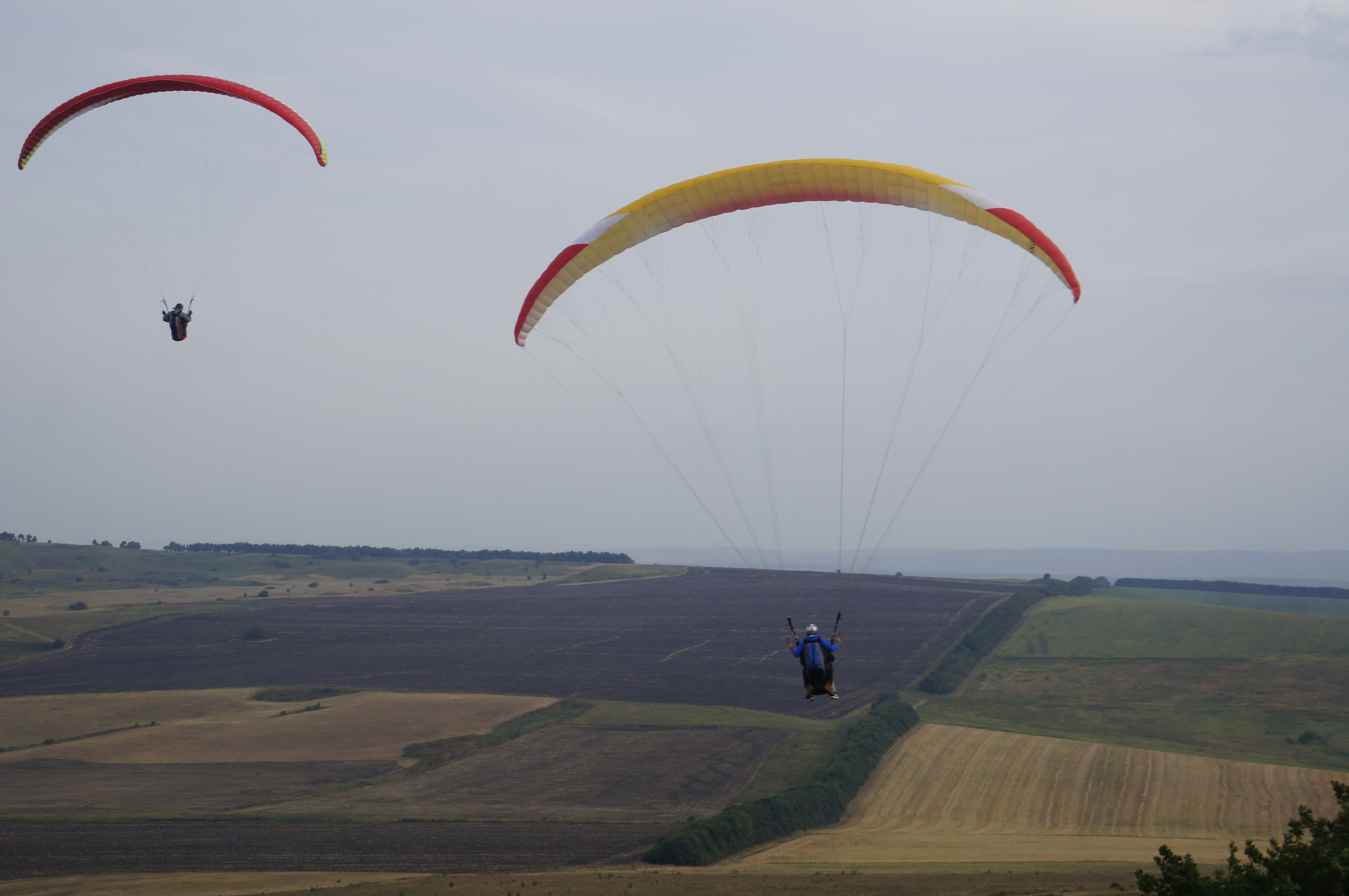 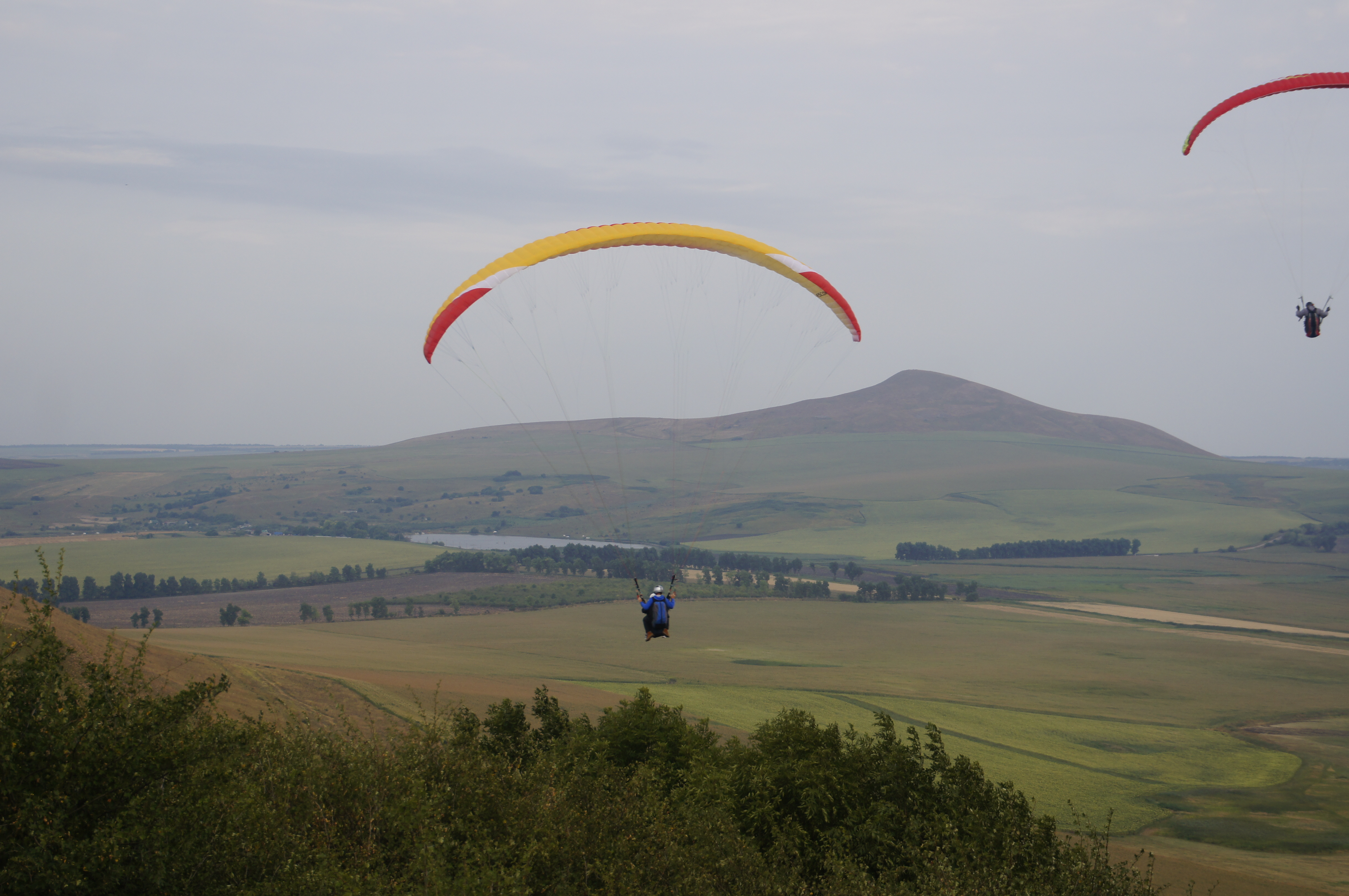 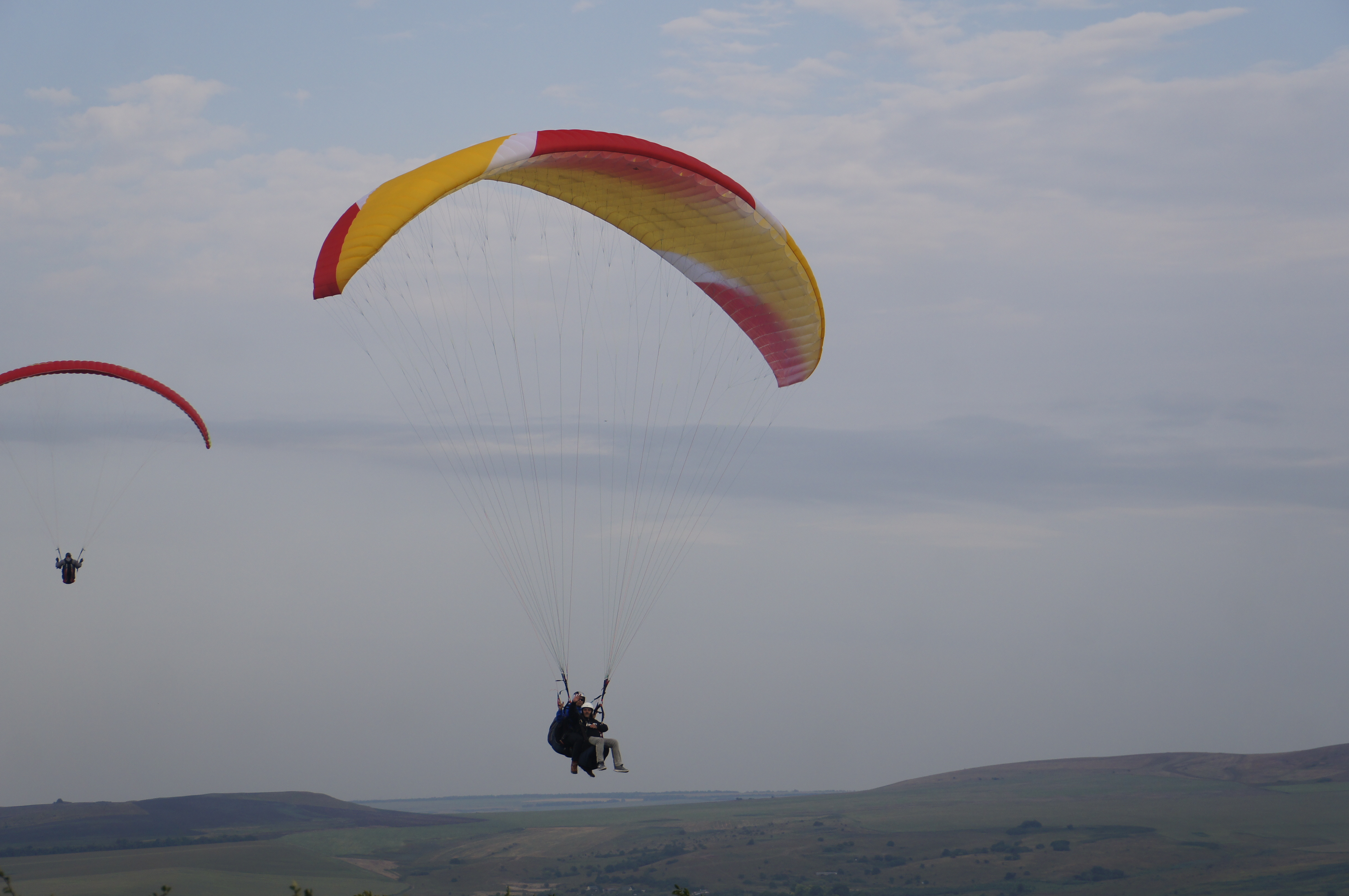 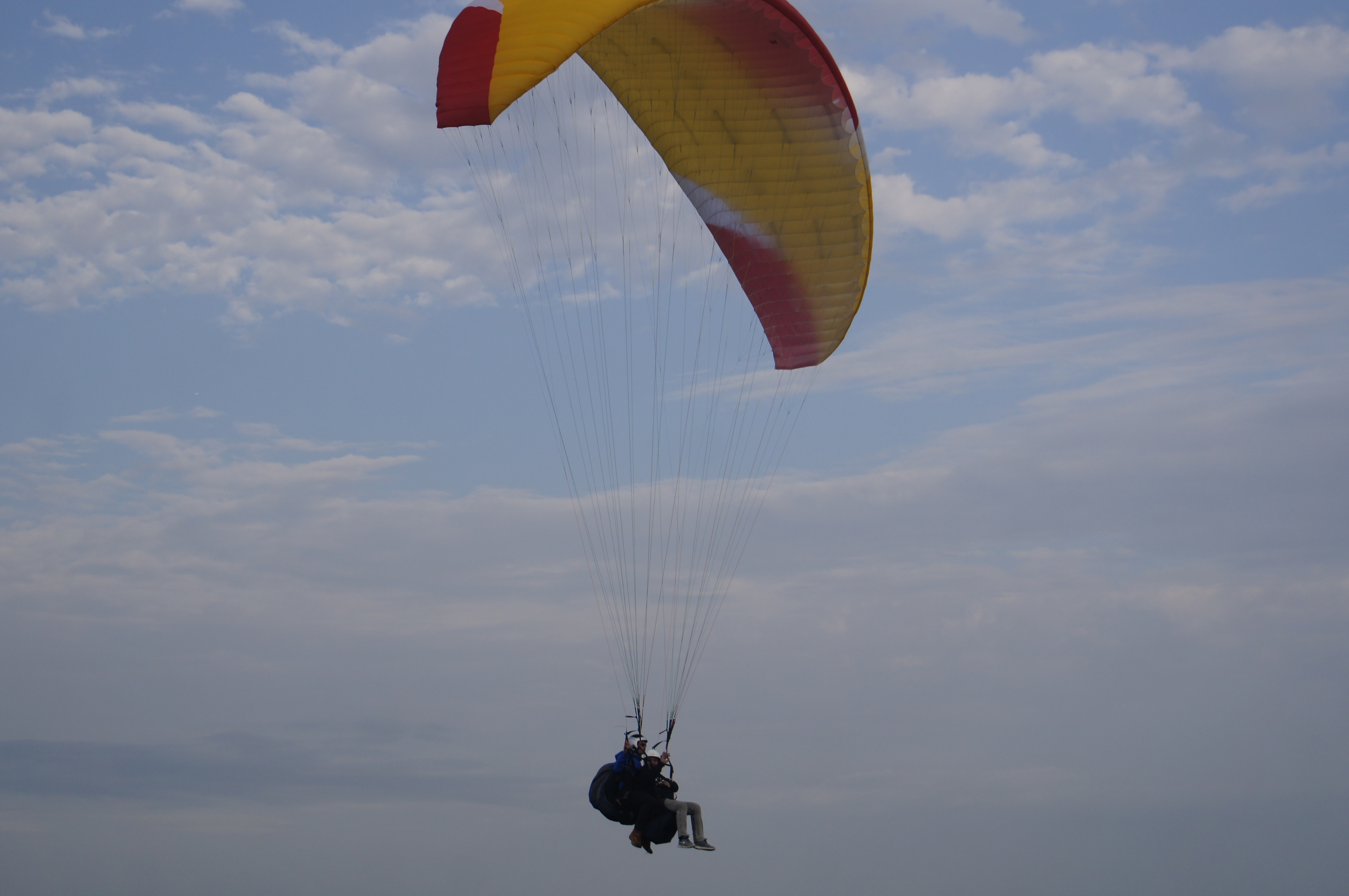 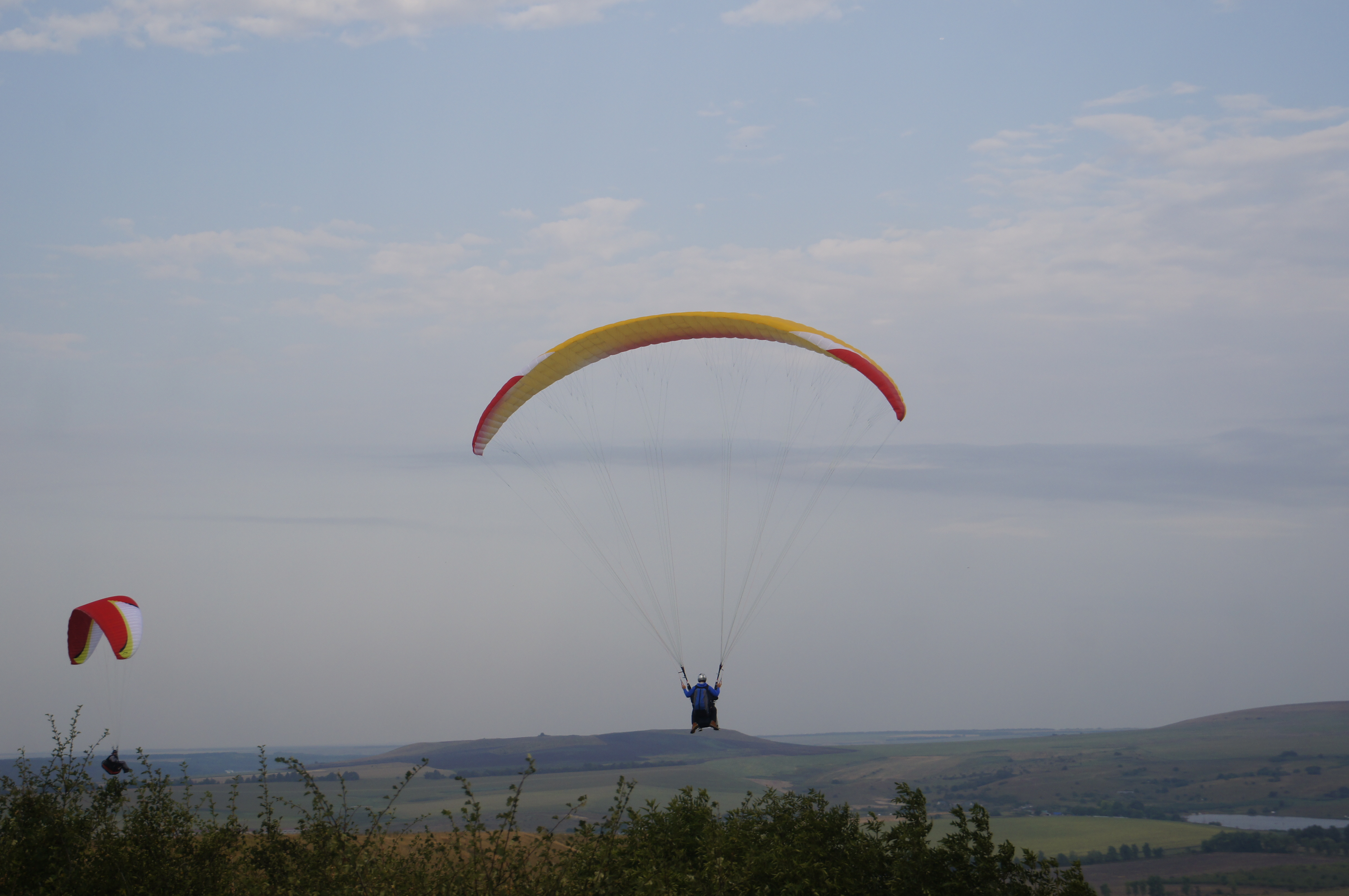 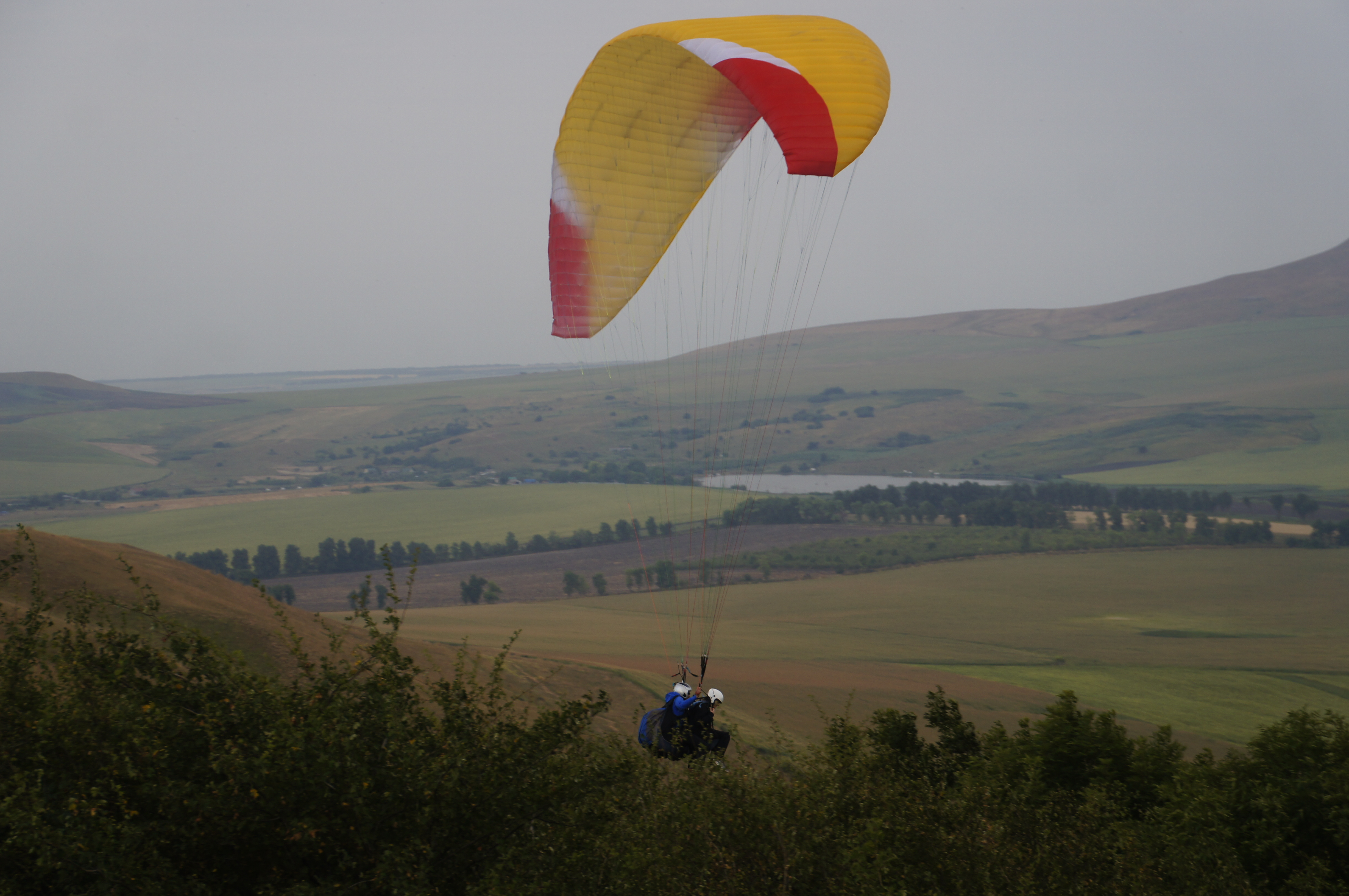 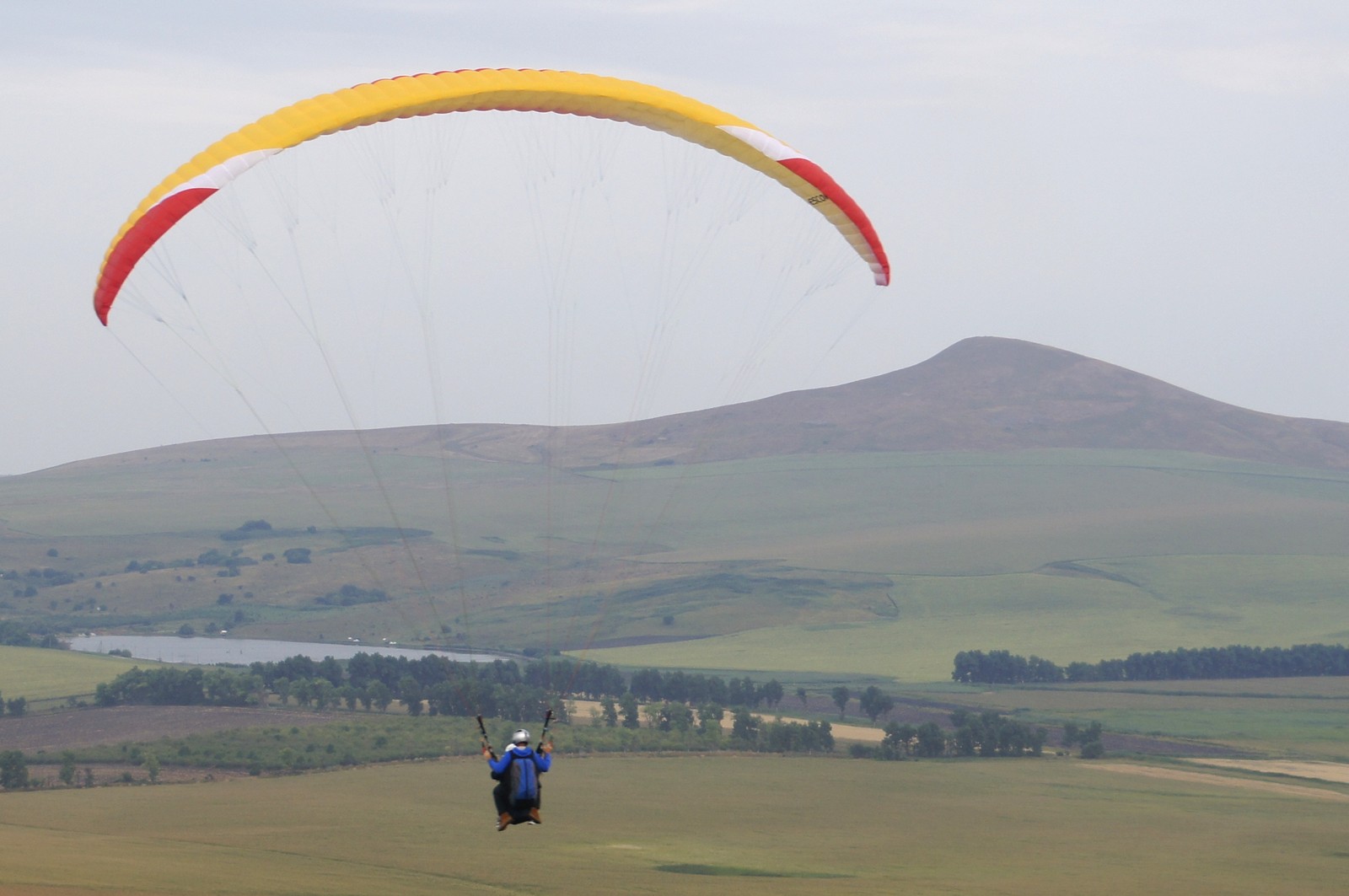 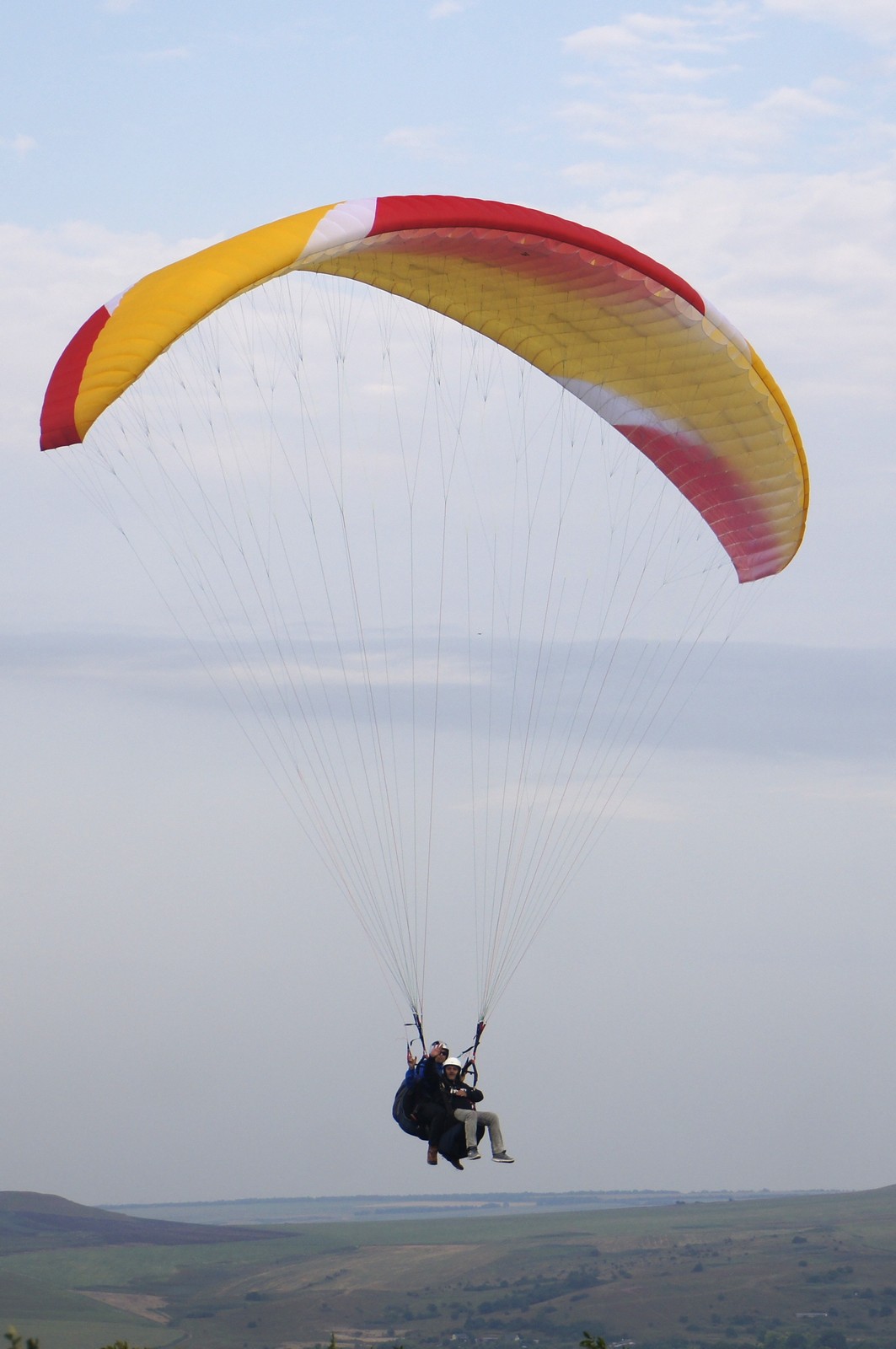 Solid construction. Modern. The design is neat. Modernity is expressed, for example, in the lines, which were not present at the Escort Second without the index "plus". The cutting and sewing is on the usual Sky Country level, there is nothing to complain about; the leading edge of the wing is "smoothed out" quite well. The shape of the wing surprises a little: aggressively narrowed "ears" are atypical for tandems and hint at some sport ambitions, and also at possible uneasy character. Loose ends (traditional aesthetical weak point of CIS paragliders) in Escort are made very decently. Rivants in thick and bright orange neoprene, well working comfortable trimmers, quite accurate workmanship.

In our case, this is a very, very important part of the test drive. For a tandem oriented for commercial flights the takeoff should be physically and technically easy in any conditions, with passengers of any permissible weight. And our skater takes off... too easily. The load on the front rows during wing lift is moderate, the machine immediately begins to lift and easily flies over the pilot, requiring quick and energetic work with the brakes to secure the wing over his head. The takeoff is somewhat less dynamic when the trimmers are fully depressed, but you still have to "catch" the wing. Full release of trimmers leads to a very pronounced roll forward and almost guaranteed start with folded "ears". The easiest start on the Escort was in a weak headwind with a winch (trimmers were 50-60% clamped) and the most problematic start I had was off the slope in the wind close to breaking point (trimmers were completely off). It was possible to fly the Exort in these conditions, but the tempo and the amplitude of the arms work is like when starting with a single-seat sport glider. Of course, it's great that it's not necessary to "pull" the front rows to the flight position - but the notorious "overflying" interferes almost always, even when starting from the winch with the trimmers clamped. Perhaps, Escort's behavior on the start will please only those tandem pilots who have to start often in low winds from limited areas - here Escort will probably be beyond competition.

Somewhere between good-plus and excellent. Perhaps the only tandems I know that excel the Escort in terms of braking sensitivity are Skywalk Join't3 and Sup'Air Sora. But it's not as simple as that - because the brakes load on the Escort depends on its flight weight in an unexpectedly strong way. With a light 45kg passenger the Escort has typical brake pressure like a good single glider, with a passenger weight of around 60kg the arm loads become typical for a good tandem, and with a 120kg passenger the Exort is turned into something manageable without much of a brake stop. However, neither the working range of strokes nor the steering efficiency depend so much on the load, fortunately. Throughout the range of flight weights tried, the Escort remains a very, very well controlled tandem.

Strange as it may seem, commercial tandems don't really need flyability - for this very specific equipment, a good start and landing are more important. And again it seems to me, that the Escort was created more for non-commercial exploitation - it flies very well. First of all, it has to do with speed, which is unexpectedly high even when the trim tabs are clamped. And if you let them go, it would be difficult to overtake the Escort on any other tandem. Escort was estimated as fast tandem by the numerous spectators and by several pilots, who tried it as a pilot besides me. I even had some suspicions that the manufacturer allotted for the test a tandem of small size - but no, the tested Escort was even a little bit bigger than the average, as much as 42 "squares". It turns out, that high speed of the experimental can be explained only by peculiarities of its design. Aerodynamic quality doesn't impress as much - it's quite normal for a modern tandem, there's no obvious superiority over vehicles like ParAAvis Rio. Rate of descent - well, it depends on the weight of the passenger! But on the average - fine.

Once again we remember about the commercial tandems. High passenger comfort is very important for them. And passengers are, as a rule, jittery people and therefore particularly demanding in terms of flight comfort. Therefore a good commercial tandem in terms of comfort should compete with simple after-school or even school single-seater wings. De facto in terms of comfort the Escort can rather be compared with middle and advanced "single-seat after-schoolers". In the bumpy weather our test pilot likes to unload his "ears" up to small, self-passing folds. Also the Escort's centroplane is not too rigid, too; it likes to crunch with fabric and to be slightly unloaded. Naturally, it's quite usual for a pilot with some experience - but passengers (especially females) react to such behavior of tandem somewhat emotionally. As a whole it is possible to estimate comfort of Escort approximately on a four-four with a minus on a five-point scale. Clamping the trim tabs is expected to improve comfort, while releasing the trim tabs makes the Escort's ears even more "fragile" and adds sharpness to the wing's behavior.

Also an extremely important aspect of the tandem test drive. The Escort's landing is difficult to assess unequivocally, too strong dependence on both the passenger's weight and the wind conditions on landing. When flying in light wind with not too heavy passenger (50-60 kg) effective brakes at first effectively accelerate the machine and then smoothly and smoothly take away horizontal speed and sinking practically to zero. And for such a comfortable landing, quite moderate brake strokes are enough, which are matched by pleasantly moderate efforts in the pilot's hands. With heavier passengers (60-80 kg) the brakes become noticeably heavier, but the prelanding swoop is still very effective. But the combination of high winds and a heavy passenger proved to be problematic for the Escort. Softly lowering the passenger to the ground is not very easy physically - with a passenger weight of 100 kg the prelaunch load on the brakes starts to become uncomfortable. To tear off a heavily loaded Escort is a task for a strong-armed pilot. And the fall of the wing to the ground, alas, does not guarantee finishing of landing: The Escort gets up so easily that in strong wind even with strongly clamped brakes this aircraft can quite spontaneously reach the flight position. In the absence of landing assistants to immobilize the Escort, you should probably use the back rows - yes, the load on them will be even greater than on the brakes - but disruption by the back rows is more likely to guarantee wing immobilization. But the best option is, of course, help from the meeters. I find it difficult to estimate.

I have written so many test-drives of purely positive Sky Country vehicles that some readers even got suspicions of my bias. Therefore I can even summarize with some pleasure: Escort 2 Plus turns out to be a controversial machine with both obvious pluses and no less obvious minuses. The most definite and bold disadvantage is a very pronounced "takeoff" of the Escort, because of which the plane almost always flies over the pilot at the start and can spontaneously fill up and take off after landing in a strong wind. And if light (and even too light) start is a plus in certain situations, then spontaneous takeoff is an unambiguous and non-appealable minus. I would not recommend landing on the Escort in a strong wind if there are no competent assistants ready to immobilize the machine in a guaranteed manner. But the Escort has quite a lot of advantages: it has a good overall polar range for a tandem, quite high top speed, excellent controllability. But the flying ability of tandem is a double-edged sword: for commercial tandems it is not profitable to have high flying characteristics, so that every flight wouldn't last too long (even if the pilot would like it very much).

The ambiguous combination of characteristics makes you think hard about the question: for whom and for what is this tandem needed? Technically not the easiest start and very decent volatility makes Escort uninteresting for purely commercial operation - less volatile, but perfectly starting machines like BeeGoldens from Gradient, BeeBet from Edvans and, suddenly, the first Rio from ParAvies show themselves perfectly in this role. But if you look at the tandem not as a source of income, but as a machine for pleasure flying - then these same features of the Escort Second become rather pluses and arguments in favor of choosing this machine. The only thing, that makes Escort look like a commercial tandem, is the goodness, durability of chosen materials and relatively high weight of the plane, which is caused by these materials. Definitely it's not a tandem for high-speed runs uphill and further flights from there.

And still - what is the niche of Escort 2, who it will suit best? I think this Escort is a good choice for pilots who just like to fly in tandem. Preferably long, far and high. Without a pronounced commercial component in the form of a large number of takeoffs and landings every flying day. It's a good device for fanatical cross-country pilots, who are ready to share their fanaticism with friends, relatives and acquaintances. Finally, it's a very, very interesting tandem for pedagogical take-off flights, with student pilots as passengers. And yes, in any case Escort Two is not the right tandem to start with in general. It's too choppy on takeoff and landing, its behavior depends too much on the flight weight.

Thank you to Sky Country Ltd. for making available the glider for the test flights.