Eh, it's been a long time since I picked up a checkers! Oh, I mean paragliders of the Polish company Dudek. "Dudek is famous for its paramotor wings with auto-stable profiles, but the non-motor wings of this company are much less known. Maybe it's because of the magic "reflex" profiles...? 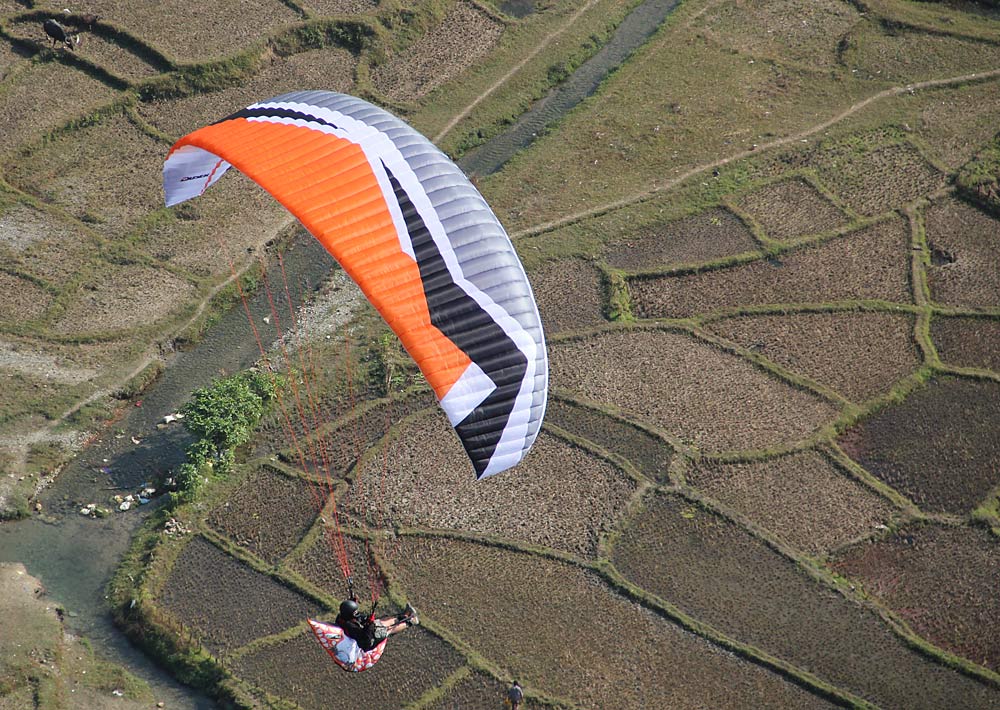 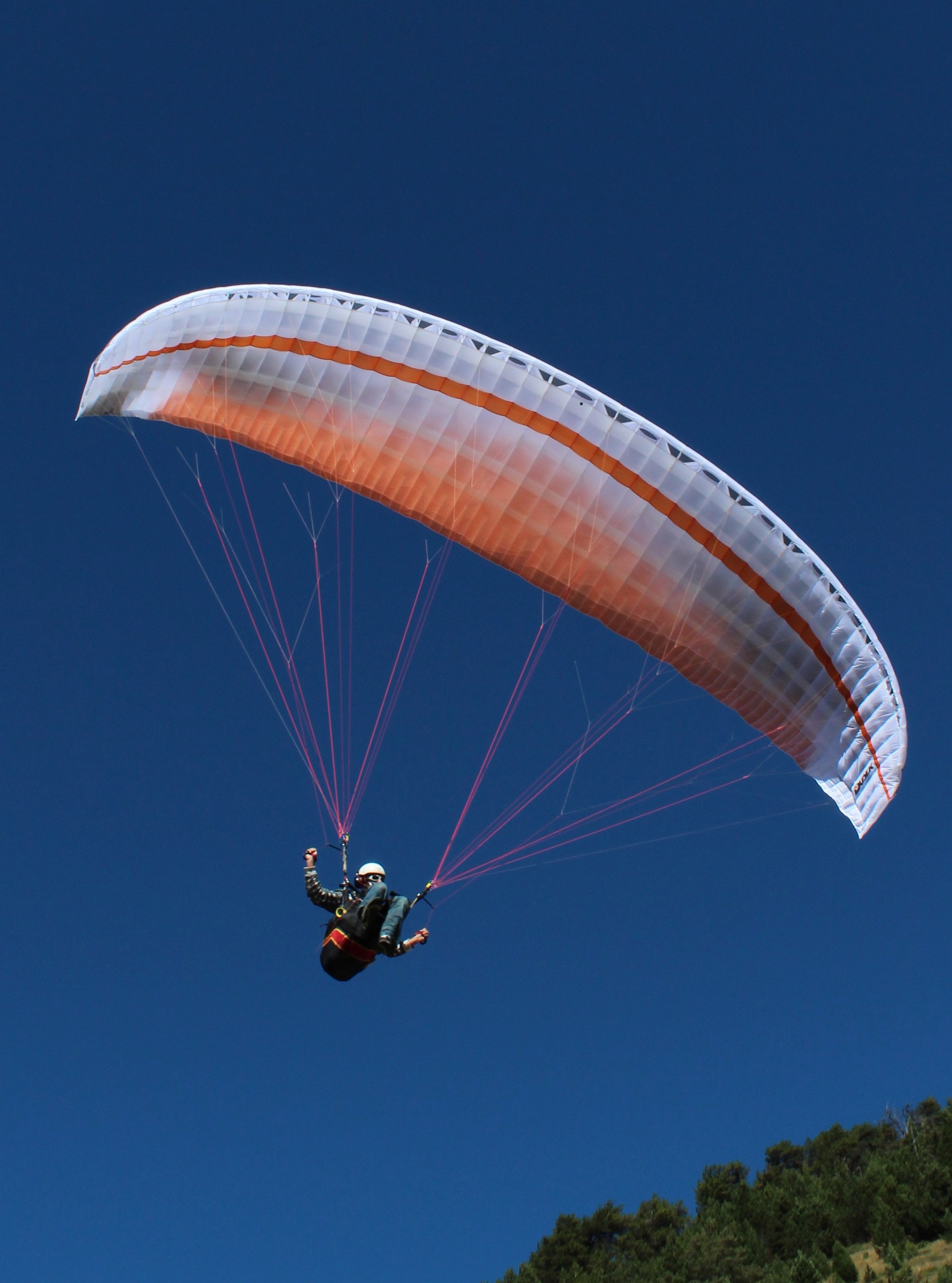 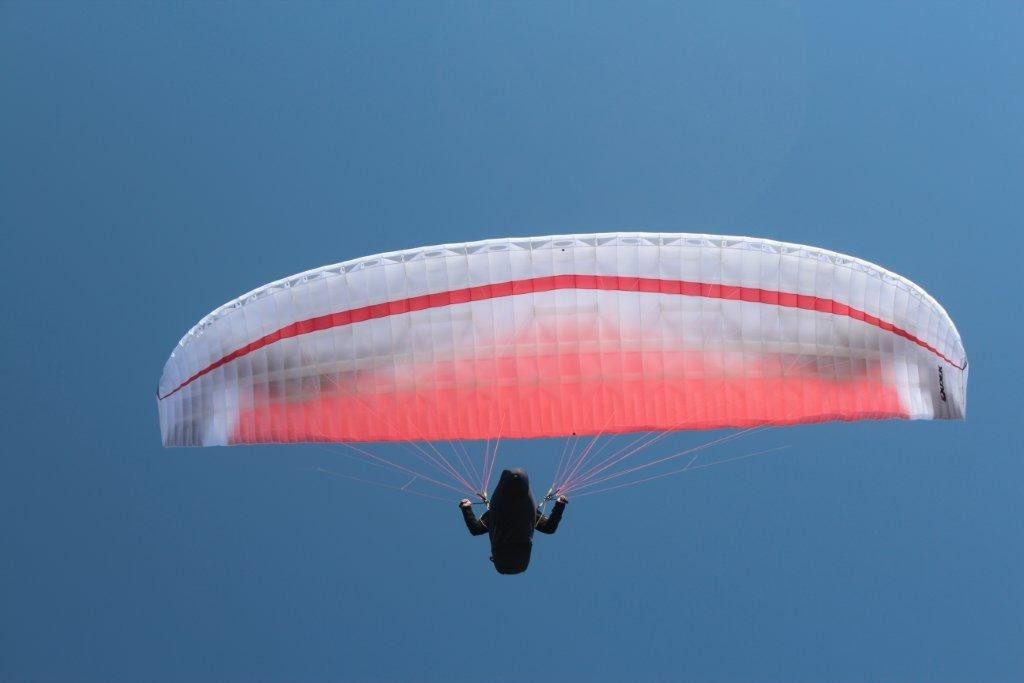 Usually, paraglider manufacturers try to impress pilots with the shape and colors of their products first, and pay attention to the small details of the construction second. But Dudek decided to reverse these traditional notions. Like the Colt "performance" of the same company, the Optic surprises and impresses first and foremost with different details. Futuristic concertina, accelerator system blocks with Dudek logos, thick bright red gas pedal wiring cord, fancy loose ends with all sorts of balls-screws... In general, some kind of competence, by golly! But, as in the case with the Colt, when you lift the wing over the head you find a rather traditional looking device with a moderate elongation and no wonders in terms of shape. Extremely aggressive painting, though, tries to camouflage the modest appearance of the subject, but it is only a painting.

No problems. The device softly, with appreciable effort on the front rows, goes to a flight position and is easily fixed above the head. Even in difficult mountain start conditions with thermals and gusty wind everything was easy and understandable. Roll errors the Optic is quite tolerant and allows you to correct them. In very difficult situation, when simultaneously with me one more pilot started to take off, Optical allowed not to break the start, half-crossed another pilot with the roll of 45 degrees and continued takeoff. Of course, it happens very seldom, but it was possible to feel in full measure the easy-going character of the device (while it is not in flight yet).

I'll start with a big spoon of soot, which, alas, pretty much spoils a modest barrel of honey with the Dudek logo. The mountain heat with narrow streams and noticeable turbulence made it possible to feel the main drawback of the Optic from the first 20 minutes of flight - non-standard pitch attitude. When suddenly entering the stream Optik doesn't try to "swell" and swing backwards, like almost all paragliders do. No, it tips forward! It's a good way - sharply, briefly and very often with reaching the border of combination which comes to this "intermediates" surprisingly easily. It's a stereotype, typical for pilot-amateur - when you enter the stream let down brake - on Optica with big probability leads to collapse! You have to break your habits and overpower yourself by briefly and quickly depress both brakes when entering the core. If you do it at the rate the wing dictates - fast and even sharply, but with amplitude of about 15-20 cm -Optic doesn't collapse at high winds. But it's not easy to make yourself pilot in this way, you have to pilot very carefully, forcing yourself to perform unaccustomed actions.

Flying. Like its bigger brother the Colt, the Optic is able to delight in speed and glide when flying on the gas pedal. Speed on the first gas pedal stage is already under 50 km/h, which is quite rare in the EN B class. Aerodynamic quality is not significantly reduced. The second gas pedal stage, of course, spoils quality more noticeably - but the top speed reaches 54-55 km/h. Excellent result for EN B. It's nice, too, that at higher speeds the Optic is even more relaxed than in balancing mode - that's how motor wings usually behave. Aerodynamic quality in the most used part of the polar (from the minimum descent speed to the first stage of the gas pedal) is normal for the "intermediat" of the 2014 model, it does not cause any complaints. The rate of descent, despite the rather high specific load, is not bad, and due to very good maneuverability the Optic performed very well in the streams.

Maneuverability. Clearly above average, although not at the level of the EN B class leaders. The balls on the brake handles on the Optic are not just a tribute to fashion, they are a necessity: brakes of this machine are very heavy and very accurate at the same time. Frankly speaking, I haven't seen such heavy brakes in the EN B class for a long time. My arms got a little tired after an hour of thermal flight, even though I didn't use more than one third of the maximum brake travel. The reaction of my test subject to my arms was, however, adequate to the load on my arms. It is no problem to join the stream even if it is a narrow and tricky uphill stream. The only little hindrance is that Optic tends to get out of the stream rather than in it, but I wouldn't take it as a disadvantage, it's just a peculiarity of the device. The Optic can almost instantly turn over its head at a small angle when giving it one hand, which is more of a performance feature, but very useful if you need to urgently twist into the very core. The Optic's ability to "follow the hand" is unquestionable and unquestionable, as it is controlled smoothly, without any delays or complicated transients. The pilot, armed with the Optic and having strong trained hands, in moderate and strong currents can almost equally gain altitude even with such good soaring pilots as, for example, BGD Tala. The reaction of the subject to weight is more relaxed, but also quite clear; this machine clearly "likes" more work with its hands.

Comfort and informativeness. Um... With informativeness the Optic is all right. Thanks to its moderate elongation Optic is not inclined to wiggle and flap its ears, even during serious bumping it remains monolithic. But speed and load of your arms can vary within wide limits alerting you very well to the closeness of the stream and entering it. Anyway you can't miss the strong current on Optica, it's notorious tendency to abrupt pitch-in and pitch-out at the beginning of the current strongly surprises at first making you adjust to the unusual rhythm of the wing's movements above your head. I think the Optic can scare a pilot who hasn't yet been trained to fly in strong conditions quickly and well, though the scare will probably limit the problems.

Dynamics and power capacity. Average. The unit stores and releases energy with a smoothness that is somewhat even surprising compared to the sharp and short pitch jerks described above. It is desirable to stretch out from the spiral by a turn or a turn and a half to dissipate the accumulated energy smoothly. On landing, the device perfectly knows how to transfer excessive speed into a stretched "swoop", which is not always necessary, but very pleasant.

Excellent. The leading edge, despite the abundance of lines, breaks quite easily. When folding 55-60% of the spread the folding does not tend to develop deep along the chord. After folding the device loses speed a little, and then makes a moderate amplitude oblique peck, 40-45 degrees. Already in the process of pecking the leading edge begins to recover, the opening is a little uneven, probably due to lines in the leading edge which slightly cling to the wing surface. The last few sections of the "ear" unfold with a slight lag, but this has almost no effect on the behavior of the unit. Loss of altitude is about 15-20 meters, course deviation does not exceed 90 degrees.

Perfect. It is easy to cause the fold, but it is just as easy to open. The apparatus loses a lot of speed when folding, goes back quite far, but then returns to the position above the pilot's head in one short movement. The opening is smooth, gradual, but quite fast and strictly symmetrical. No tendency to parachuting is noticed. The loss of altitude after leaving the mode is 20-25 meters.

Takes off from the thermal spiral

Perfect with minus. The mode is traditionally difficult to call, primarily because of the completely inhumane force on the arms near the stall. The warning hand load drop is pronounced weaker than average, but quite palpable. Also, the device tends to accelerate noticeably and slip at the entrance to the underrun. The visual mode is also quite reliable - the stall begins at about 20% of sweep and the torn off part of the wing starts to bend backwards with the flow. The takeoff is delayed for about a second - quite a good result - and the glider continues the thermal spiral without any serious pitching or pitching back, if you release the inner brake quickly.

To be honest, it's been a long time since I experienced such contradictory feelings during a test drive. On the one hand, the Optic has a number of unconditional pluses in the form of a stable and fast gas pedal, very good maneuverability and excellent, fair passive safety. On the other side of the scale, the Optic's extremely unpleasant propensity to collapses and swerves at the entrance to a stream, and its low resistance to collapses in general. Were it not for the Optic, it would be worthy to call it an entry-to-intermediate level wing. But it doesn't work, alas. I can't recommend Optic to the weekend pilots, who just started to learn steaming and cross-country flying. Optic requires its pilot to act coolly, quickly and non-trivially - and it's a completely different level of flying skill. I'd say that minimum flight time is 150 hours - at this flight time you will be haunted by strong winds only during first 20-30 minutes of getting acquainted with aircraft. With less flight time Optic is very likely to frighten pilot and impose non-standard engine stereotypes, which are hardly required when flying with other, more traditionally behaving wings.

My thanks to my Dudek dealer Pavel Mityukliaev for making the glider available for testing.