Dudek Colt: To fly is to fly

Actually, the Polish company Dudek is best known for its motor machines. And they, in turn, are famous for their autostable profiles, which are commonly referred to by the cool and incomprehensible sounding word Reflex. But I haven't dealt with "dudeks" for non-motorized flight for several years now. And I dare say, that the modern Dudeks with no engine look a lot like Paramotor wings. More details are below. 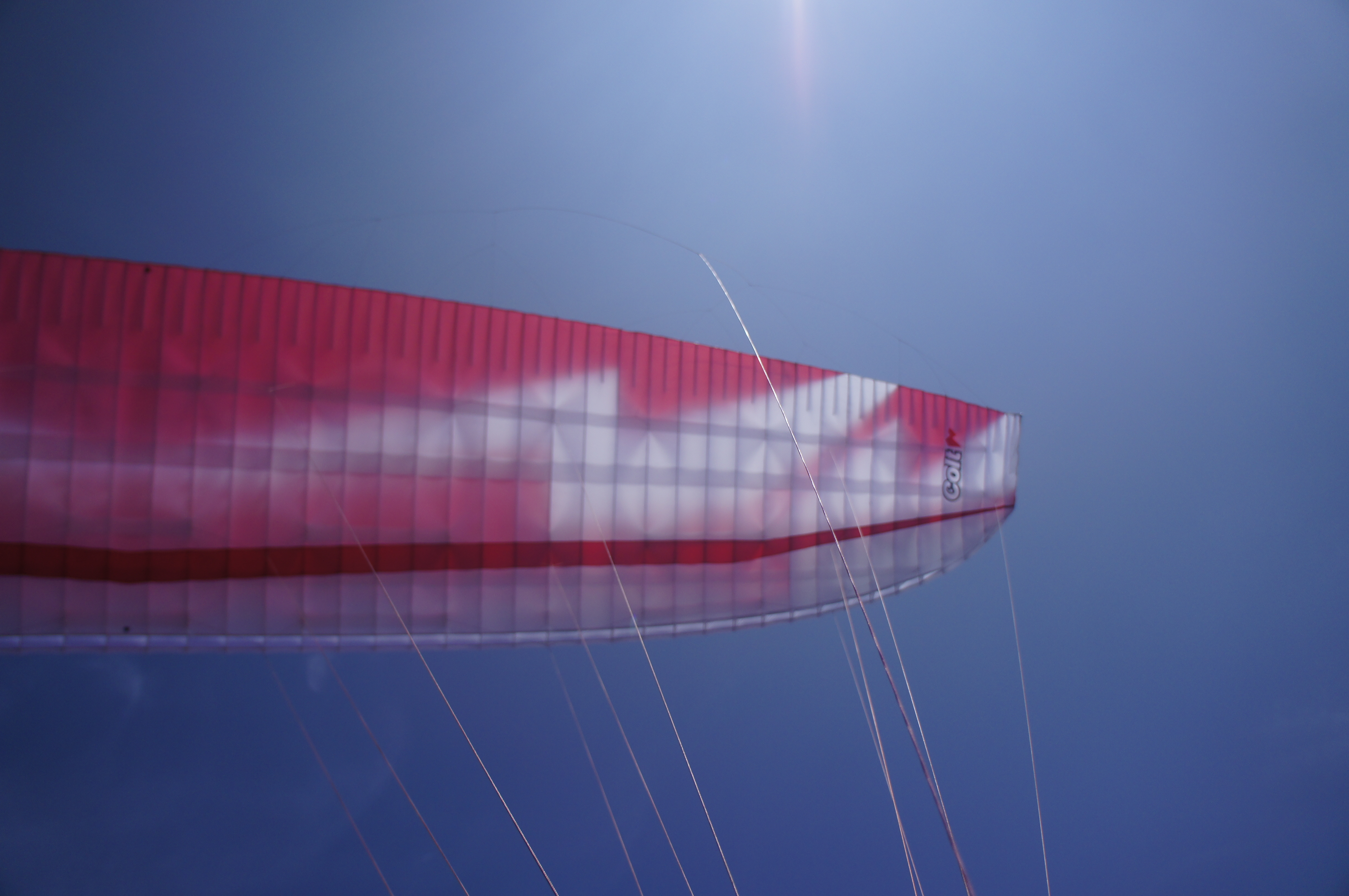 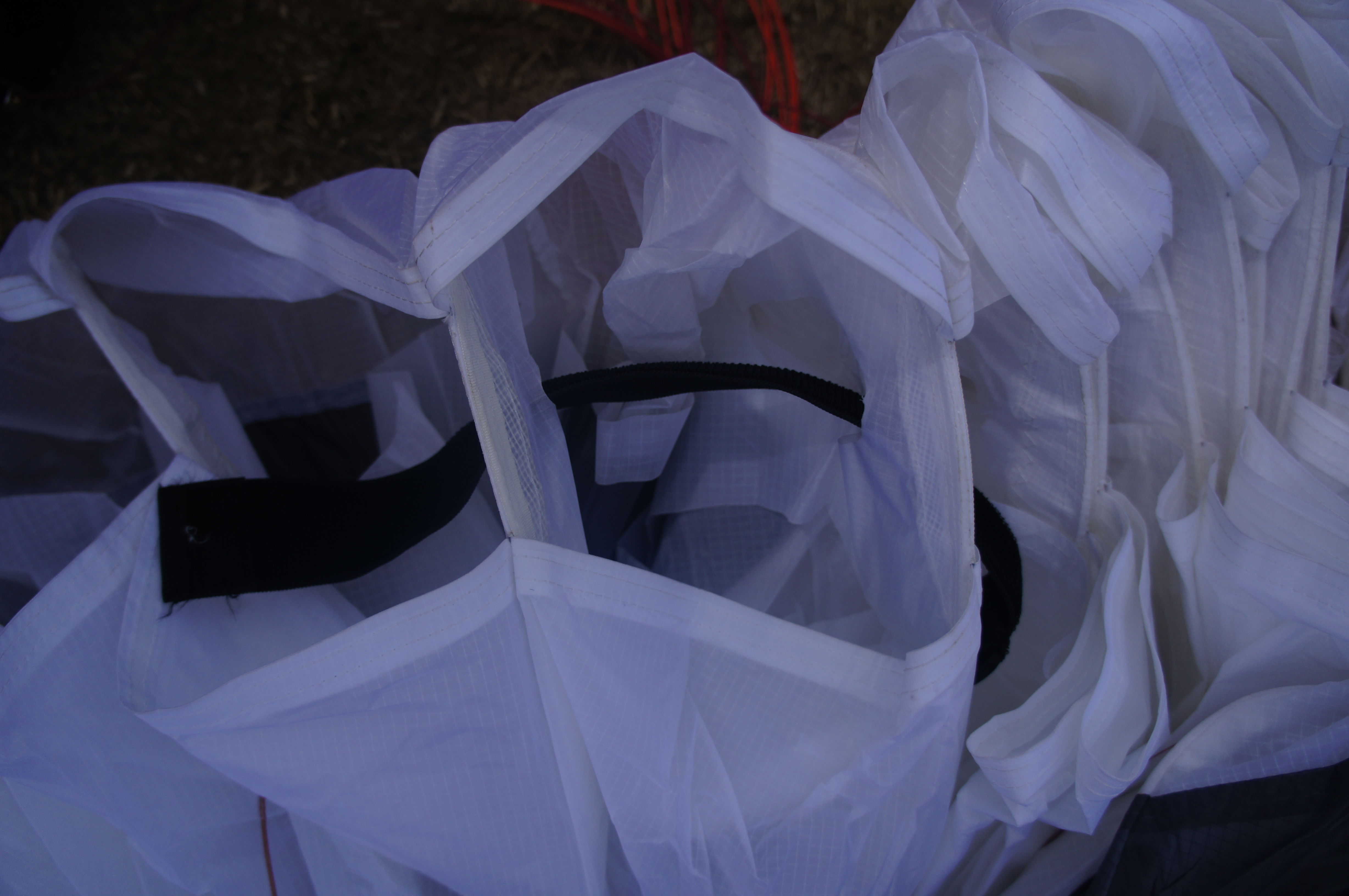 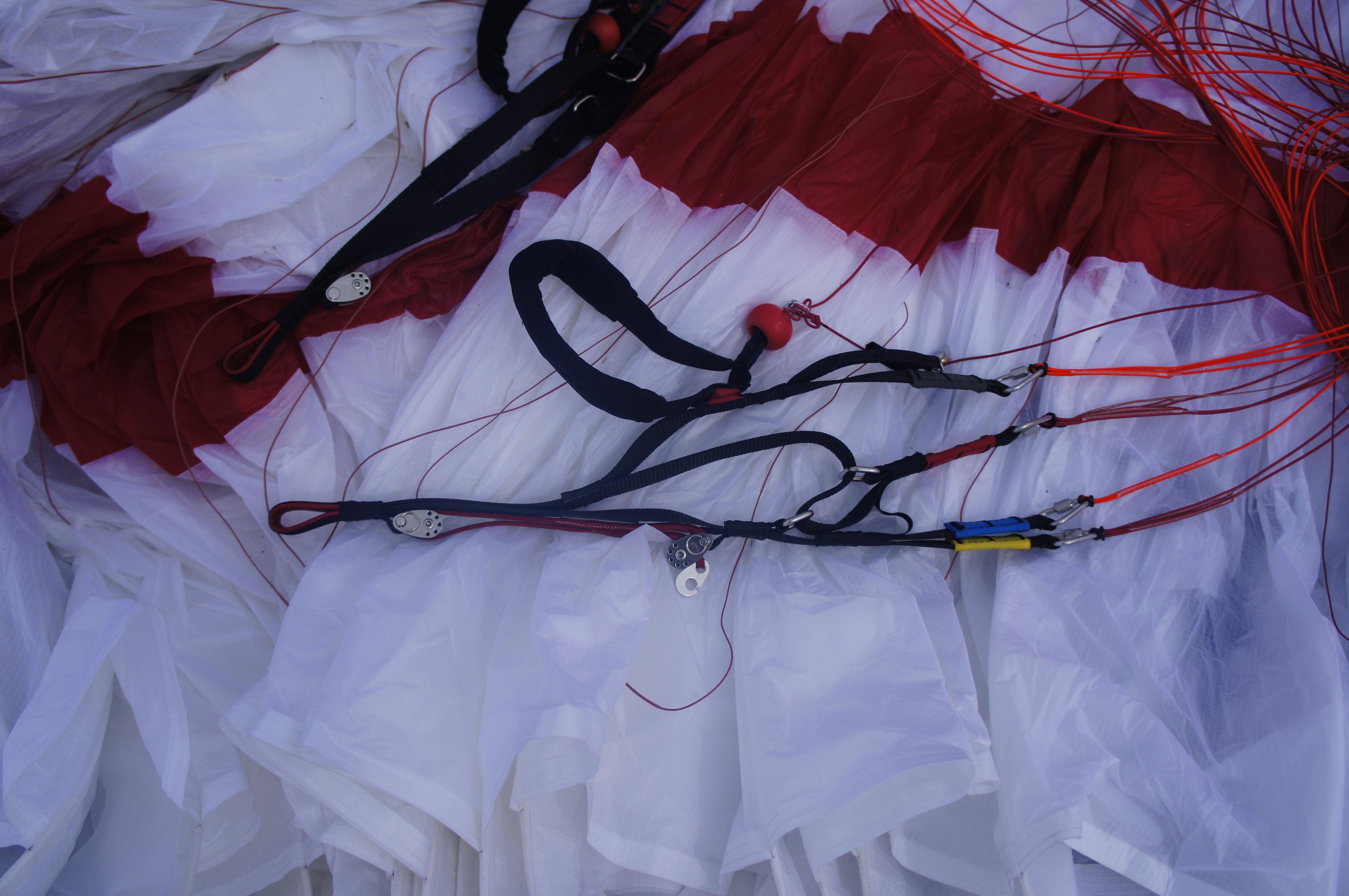 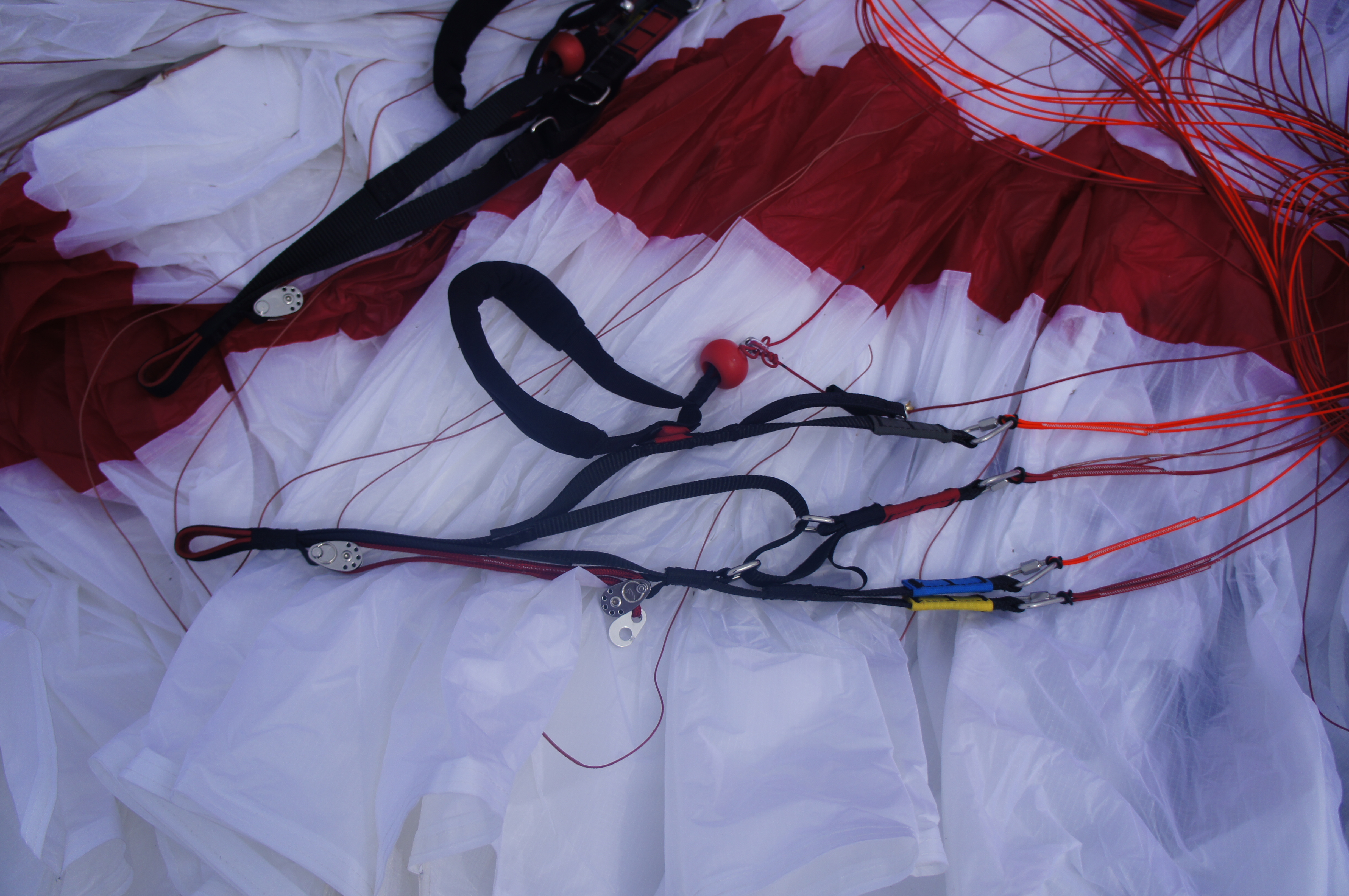 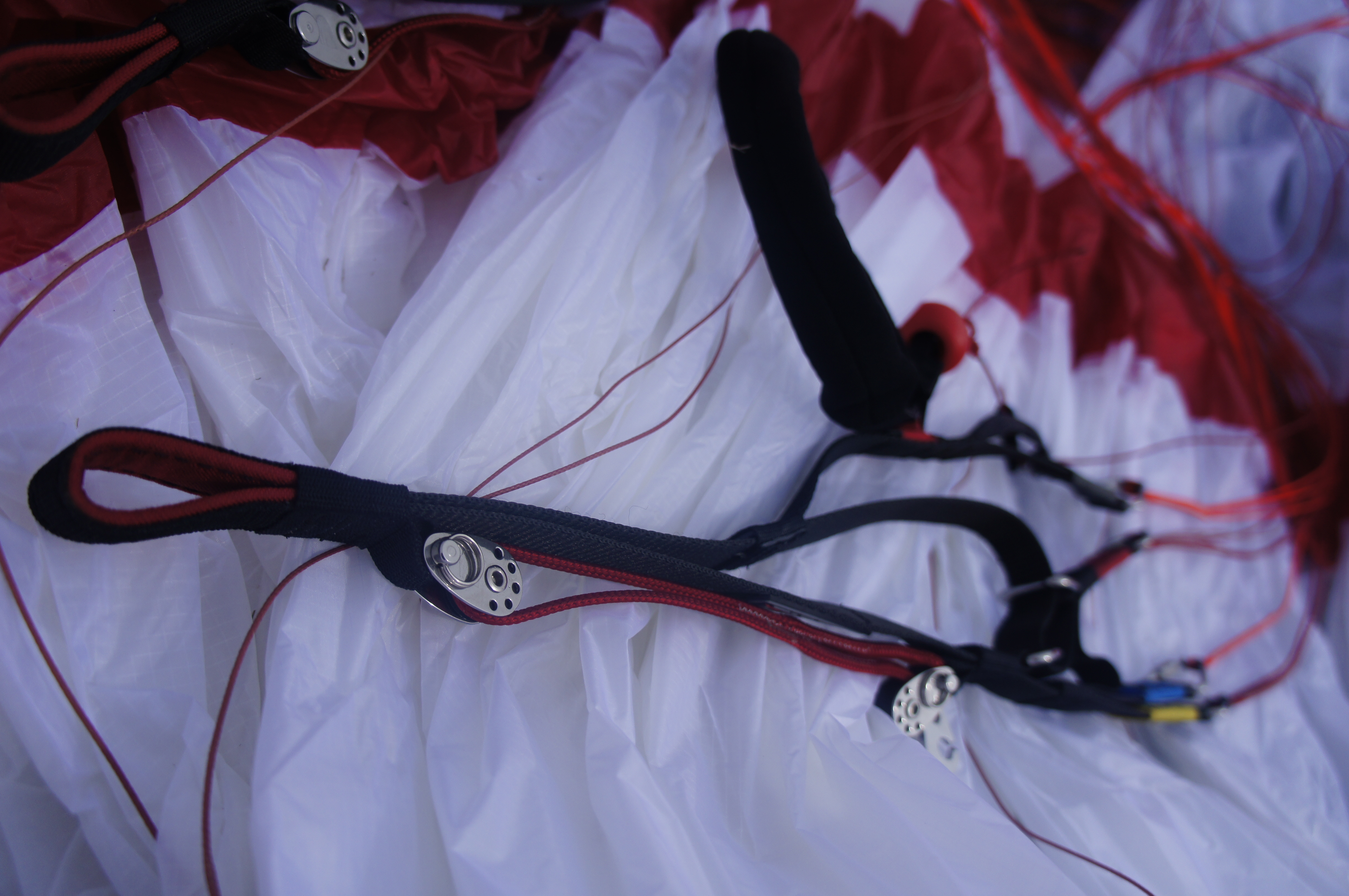 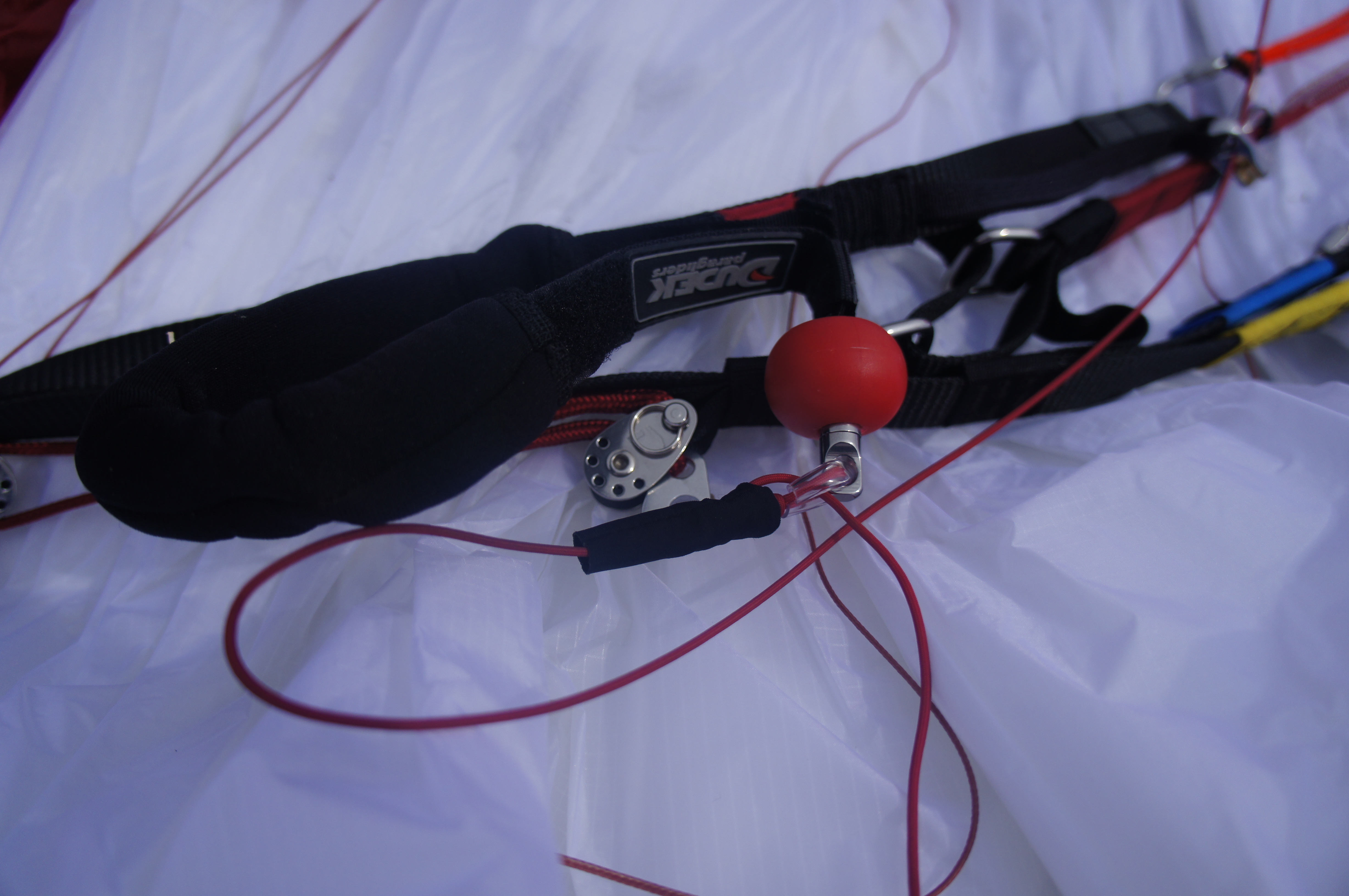 A serious manufacturer knows how to declare the seriousness of his intentions even in the small details of design. And Dudek has done his best. The concertina made of spectacular silver paint is no worse than the Gin Gliders. Gas pedal wiring blocks with Dudek logos. The paddles are thick, soft, neoprene, size-adjustable, with plastic balls, powerful magnets, swivels, gypsies and bears. The ends are 15mm Kevlar tape. The slings are strapless in all tiers, and the bottom one is made of the same kind of dyneema that is used on the most high-end Ozone competisons. And even the plastic clamps on the cords are not the same as the others. All in all, you get the impression of some kind of beast machine... until you look at the wing itself. No, there are enough of construction tricks even there (just huge lines for example!), but quite modest elongation and classic geometry of the wing make it impossible to suspect that this wing has really serious sport ambitions. Let's see how it will be in the air...

This test subject has a lot of character. He's not a jerk! If you just relax a little, the flying apparatus quickly puts you in your seat. "I got five of them during a couple of hours of flight in moderate turbulence, but they were not provoked by the pilot. On the one hand, it was somewhat surprising - it seems that Colt is equipped with fishing lines and therefore should be quite resistant to collapses. On the other hand - every time the machine opened itself, easily, quickly and without serious "jerks". After such a preamble we would like to write something nice about our test item, and we will start with its volatility.

Volatility. At the level of the beginning-middle class EN C and the highest-flying vehicles, formally belonging to the EN B. Gas pedal speeds are pleasantly higher than they were in the EN C class a year or two ago, about 7km/h on the first stage and 14-15 on the second. Taking into account significant balancing speed of the test subject (about 38-40 km/h), we get the maximum speed of about 53-55 km/h. Very good result, clearly above average. It seems that the epoch of slowed down for the sake of passive safety "performances" is gradually leaving in the past... It is also pleasant that the aerodynamic quality of the Colt drops weakly not only in the first, but also at the beginning of the second half of the gas pedal stroke. The Colt's glide itself is decent for a modern EN C, but no more than that. At transitions in calm air the "glideometer" showed figures in the region of 8-10 units. You can't compete with monsters like Trango XC2 or Gin Carrera, but it is better than the class average. The descent rate of my test subject is again normal for modern "performance": you can soar in moderately hot weather without any problem, but for "survival" in weak and very weak conditions the "steaming" representatives of the EN C class would be better suited. But...

Maneuverability. Here the Colt can already shut up quite a lot of representatives of its class. Everything is simple, understandable, reaction to brakes is fast and clear, the machine confidently "follows your hand". The load on the brakes quickly and pleasantly grows as you lower your hands, and the balls on the brakes feel quite appropriate and even necessary in many cases. There are no questions about the Colt in the thermals: I just want to do it! All kinds of dynamic maneuvers like steep spirals or vingovers also work great. In general, sheer pleasantness.

Comfort and information value. Comfort - below average, informativeness - expectedly higher. It is impossible to name the Colt especially sharp and twitchy; however, rather frequent collapses, certainly, do not add to comfort. But there are no problems with informativeness: the device changes load on your hands very well and understandably, quickly and accurately changes its airspeed on the way to the core, and generally serves as a fast and undistorting interface between the pilot and the air element around him.

Speaking of folds. Having flown the Colt, I have never been able to solve the mystery of the unexpected "folding" of this wing. To understand this peculiarity of modern Dudeks (and, by the way, not only them) helped me to fly the "little brother" of the Colt - Optica (EN B) and partially on Icaro Wildcat TE (EN B). These machines do not behave so dynamically, and the process of "combat" folding can be considered in more detail. It seems that the reason of strange behavior of all these three machines is the wing profiles with pronounced autostability. It's good and even excellent for motor paragliders, but non-motorized technics with such profiles seems to start to feel weird when flying in strong thermal weather. When entering the stream, both Dudeks tested showed a strange tendency to peck forward a little - although the machines equipped with more traditional profiles, on the contrary, go backward in such a situation. The forward movement is fast (in the case of the Colt, very fast), has a small amplitude and therefore can not always be understood and noticed by the pilot. But as a result of such a flip, the Colt and Optic for some reason want to fold, and in many cases they succeed. Flying the Colt, I never found a way to defeat this attack, but later the Optic quickly taught me to preemptively apply pressure to the brakes before entering the stream. If you manage to do it in time the plane won't fold, even if the thermal is strong enough, but it's not a natural piloting action. I think that in regular flights on such paragliders a pilot may develop such piloting stereotype, which, to put it mildly, will be not useful in flights with more traditional wings. Though it probably won't be harmless for pilots-motorists...

Dynamics and power capacity. Above average, but without horror. Yes, the device stores quite a lot of energy, but it gives it away without excessive harshness and twitchiness. In this respect, in my opinion, Colt is well-balanced - you can rock the wingovers to your heart's content, and make a landing with overdrive, but all these maneuvers do not require a particularly careful control of the speed transitions to high altitude and back.

Great. Simple, straightforward, and predictable. Folding 50-55% of sweep and 20-30% of chord does not take much physical effort. After folding the apparatus gradually subsides, losing height and going to an oblique roll with an amplitude of 30-40 degrees. The folding unfolds gradually, from the centerplane to the "ear", which may unfold a little more sharply than the rest of the wing, but this does not create problems. The heading deviation in the process of leaving the fold is about 90 degrees, the loss of altitude is about 20 meters.

Note that the Colt's "combat" folds have a similarly uncomplicated pattern of flow and exit. And if they were not so frequent, it would be wonderful.

Great. After "frontal folding" the unit immediately loses a lot of speed and for a second or two there can even be some "hang-up" similar to the beginning of parachuting. But the Colt does not try to parachute as much as possible after a front collapse - after a little bit hanging back the machine quickly goes straight down by 30 degrees and in literally a second it recovers the lost speed. This mode is symmetric, without pitch twists. Loss of altitude at the exit is about 20 meters.

The Colt is a very peculiar machine with a strange combination of advantages and disadvantages. The notorious "foldability", noticeable in strong weather, does not make the pilot's interaction with the plane any easier, while its non-standard behavior on entry to the stream requires the pilot to apply non-standard algorithms of piloting. As for the rest, the Colt is a not-so-common representative of the EN C entry-middle level. It's mostly about the acuteness of the subject's response to chatter and steering, and describes well the Colt's overall level of flight characteristics, the most striking of which is a fairly high top speed. I think the Colt could be a near perfect choice as a second - non-motorized - wing for experienced power pilots who want to fly seriously enough without a motor and are even willing to buy a separate wing for non-powered flying. The specific nature of the Colt will be most understandable to motor pilots who are used to "reflex" profiles. And for non-powered pilots, the Colt may elicit reactions ranging from surprise to difficulty in really strong weather. Despite the Colt's fairly high passive safety, the specifics of its behavior force you to raise the lower limit of acceptable flight time to about 120-150 hours, and even more if you plan to fly in strong conditions. By the way, it is in severe conditions that the Colt will be most effective.

My thanks to my Dudek dealer Pavel Mityukliaev for providing me with a glider for testing.