Axis Pluto 3: Not a day without a route

I remember my first Pluto as a very pleasant combination of flying and easy-going nature. Since then a lot of time has passed and a lot has changed in the paragliding world. But how much the philosophy of Pluto has changed - let's see now... 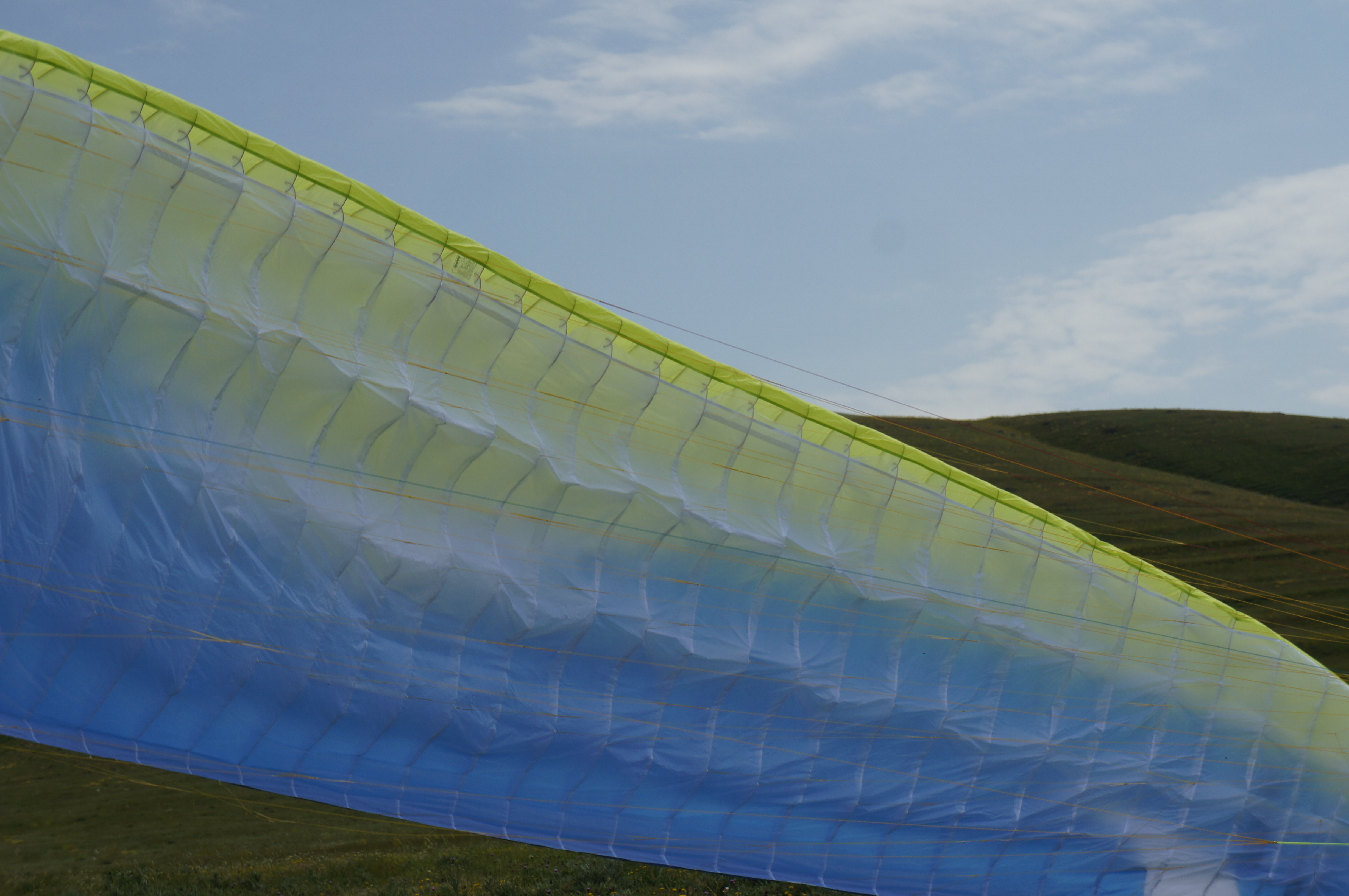 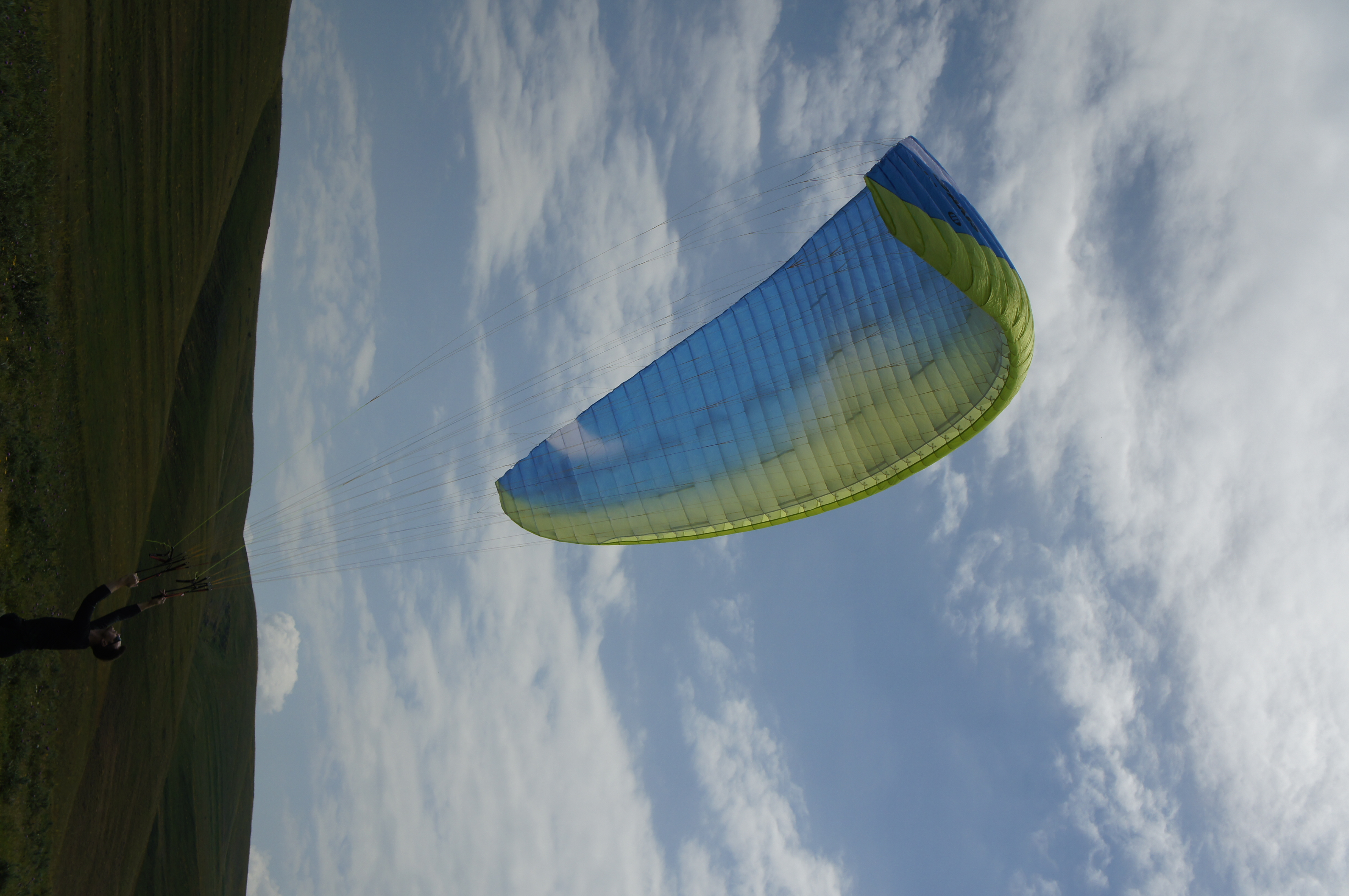 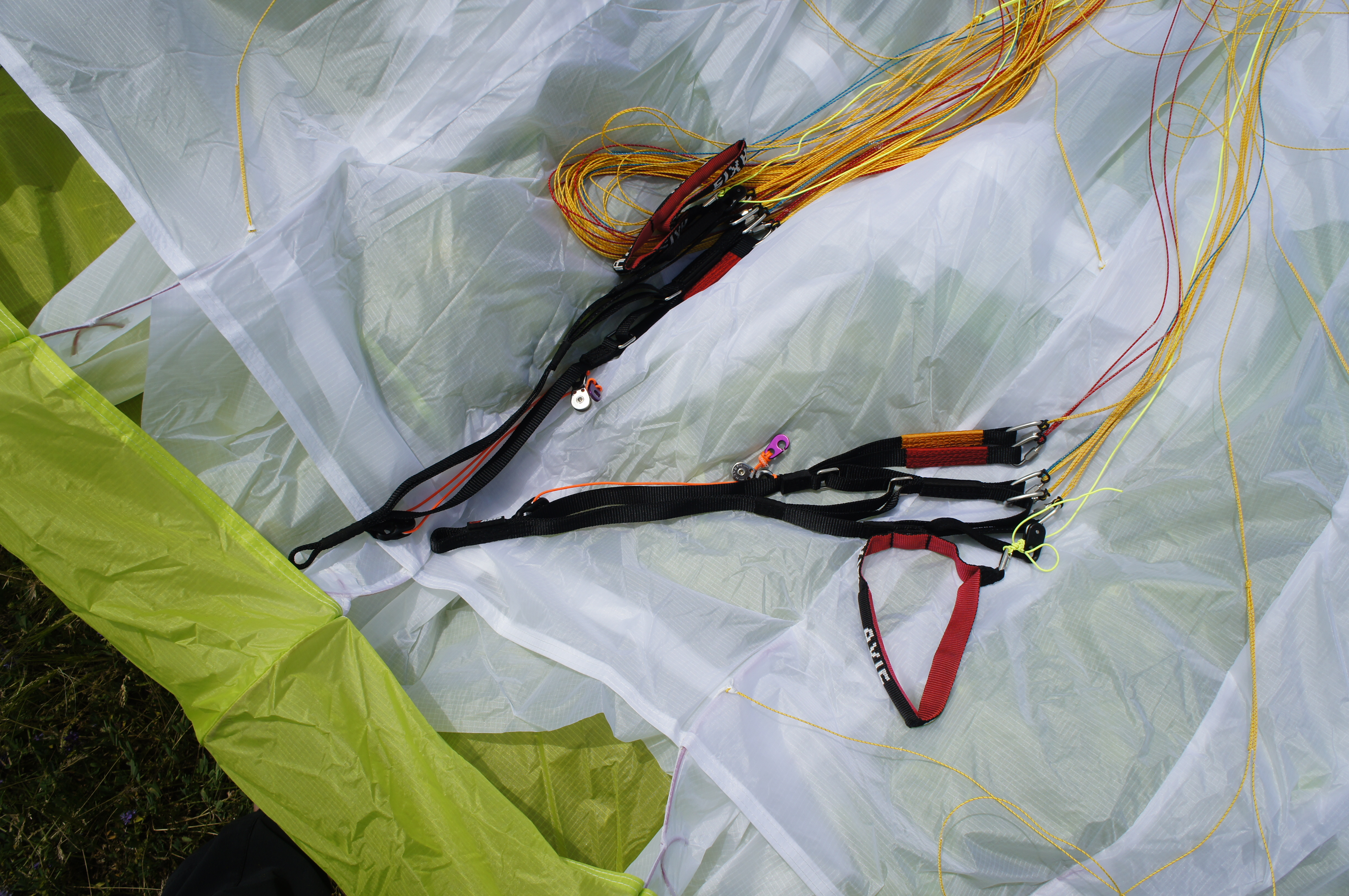 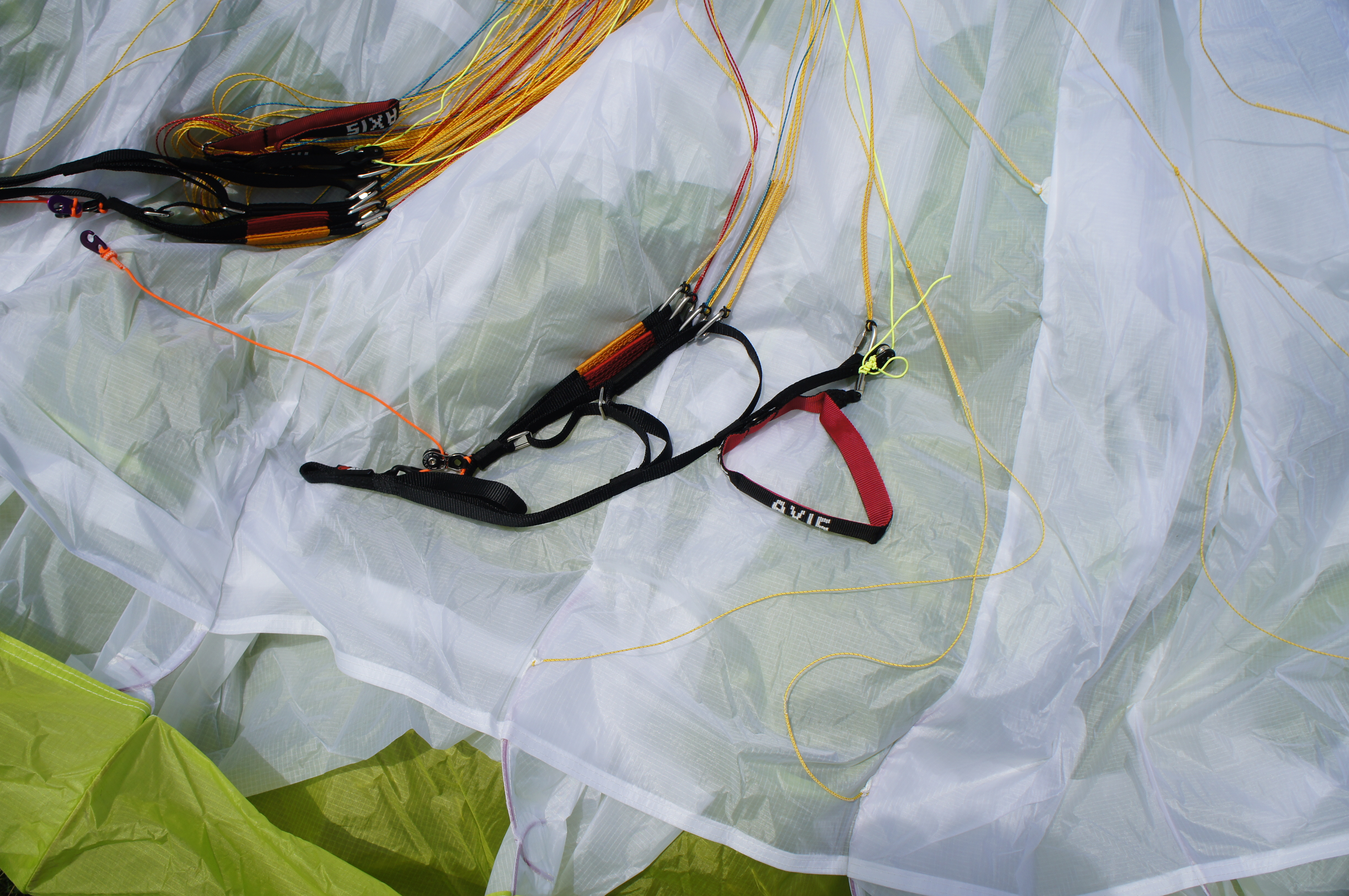 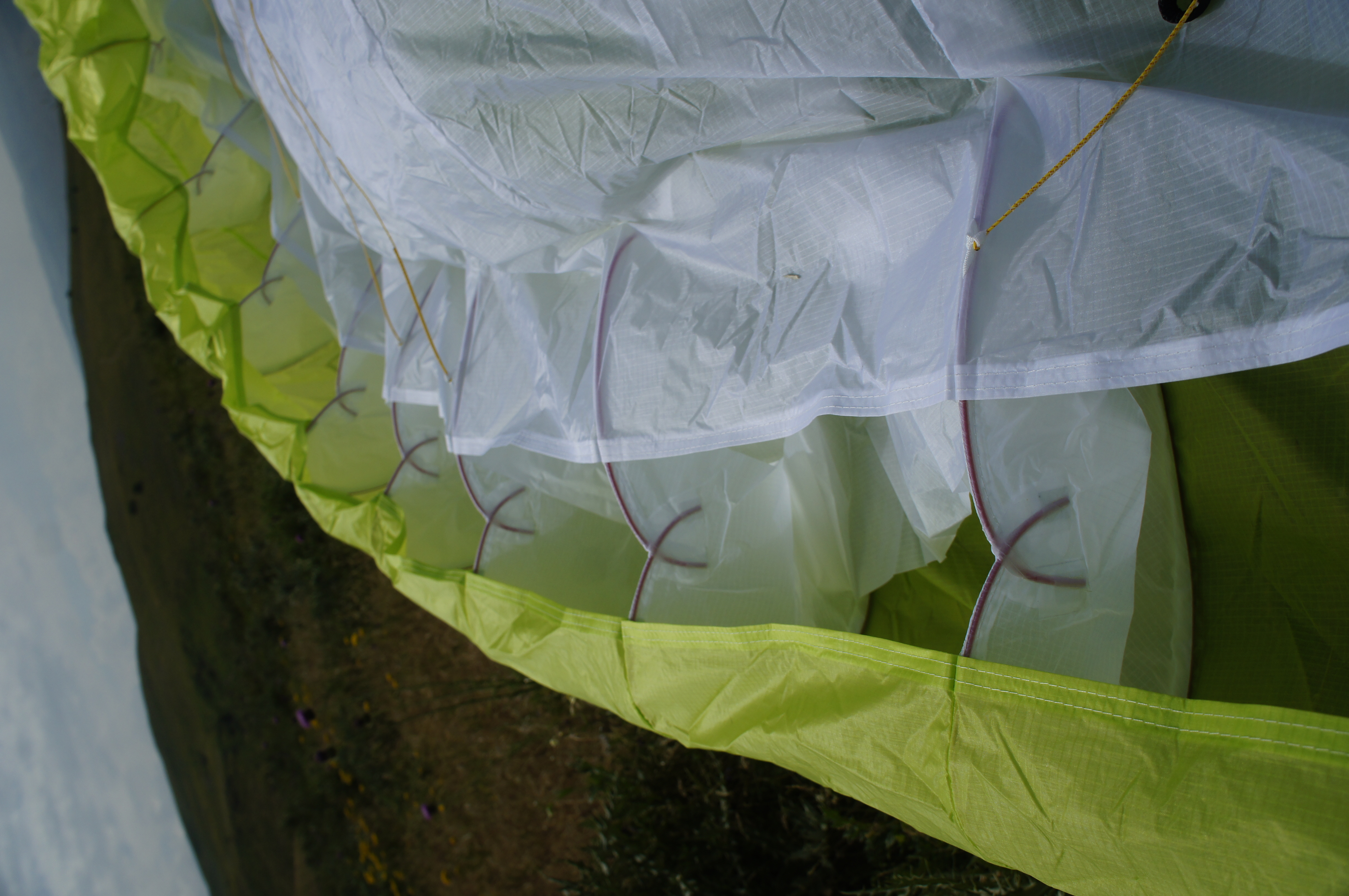 It evokes mixed feelings, in a good way. You can see that Axis tried to "load" the new Pluto with innovations exactly as much as they do not create safety problems, and this is commendable. On the one hand, there's the fancy shark-knose and the thin, flapless slings in the upper tiers. On the other hand, neither the shape of the wing nor its elongation gives the impression of aggressiveness and great ambition. The loose ends are traditional for modern Axis, narrow and ascetic, but comfortable enough. Huge Axis lettering on the huge brake handles looks a bit garish, but that's only a fault.

Working with the wing on the ground

It's good. It is not perfect, but still no complaints. The glider goes over your head smoothly and easily, but it is not as light as some other "after school" gliders, especially those made of lightweight fabric.

My introduction to the Pluto3 began rather dashingly - in the strong and turbulent thermals of Mount Athis. And I guess that such weather fully opened the character of the machine. The first impressions were mixed. On the one hand, the Pluto appeared to be endowed with good agility and maneuverability, allowing not to lose too much in sets and transitions to other pilots in the middle to upper EN C class. On the other hand, the behavior of the Pluto3 in turbulent conditions was also quite turbulent. It insisted on an active piloting, which required waving your arms with unexpectedly high amplitudes and loads.

Flying ability. Very decent for a mid-range EN B. The bird does not limit its pilot, in fact it provokes him to fly in sport style with frequent and aggressive work with the gas pedal. Perhaps it is the high speed modes of Pluto3 that deserve the most attention and the most praise. The speed increase at full speed of gas pedal is not less than 12 km/h. Accuracy of measurements suffered from the Armenian bumpiness, but I didn't see lesser figures on the screen of my Flymaster. In itself, this minimal increase is not particularly impressive - but much more impressive is the aerodynamic quality falling slightly at high speeds and the unexpected comfort of high-speed flight. Perhaps at 50% of gas pedal travel the Pluto behaves no less (or even more!) comfortably than at balancing speed, and the appreciable degradation of volatility begins only at 80% of speed-system travel. Behavior quite normal for some high performance - but by 2015 standards rare for an after school wing! What's more, even with a little "combat" compounding at full gas pedal, the Pluto's behavior remains quite comfortable.

Aerodynamic quality. Somewhat above average for an after school wing, but not the level of the class leaders. It is clear, that Pluto cannot be compared with GIN Carrera or UP Cantega XC3, but if to exclude from the comparison the apparatuses, which correspond to EN B only formally, then Pluto has not so many competitors among real after-school wings.

Rate of Descent. No miracles, everything is standard and usual. As befits an honest "after-schooler", the Pluto begins to "bunch up" (in comparison with higher-grade gliders) in thermal spirals with a rather steep bank, but this does not become a problem in fair weather thanks to our test subject's good maneuverability and his quick reactions to control movements. In a straight flight, the rate of descent is neither impressive nor disappointing - everything is normal, just as it should be.

Maneuverability. Specific, but above average. Specificity manifests itself in the need to work with large strokes of the arms, not being afraid of a large load on them. I suspect that this behavior is a kind of "foolproofing": yes, Pluto is not very responsive, but it forgives rude and inaccurate piloting. If it makes you uncomfortable, it's only for experienced pilots who are used to much sharper and more accurate brakes. Let me repeat - this effect is the most pronounced when you actively pilot in heavy turbulence. Unfamiliarity can make your arms get tired. However, you can use an alternative approach to the problem - do not try to compensate everything. It won't cause any problems, because Pluto is very resistant to collapses. And in terms of thermals it helps a lot if Pluto is very sensitive to work with its weight. Maximal tilt in suspension, brave inside turn manipulation with 40-50 % of full brake travel - and Pluto can steer through any thermal! Entry into a turn demands an appreciable physical effort - but once in a roll the Pluto holds it confidently, and even narrow and strong currents rarely toss the Pluto out. It's roughly the same experience on steeper spirals and wingwheels. On the one hand, the increased load on the hands restrains the pilot and does not let him pilot too aggressively. On the other hand, if you know how to pilot, you can always get what you need from the machine.

Comfort and informative. It is more correct, of course, to write "or", because one conflicts with the other. In Pluto the balance between informativeness and comfort is shifted in the side of informativeness. Thanks to its moderate elongation, the Pluto does not wriggle and "flap its ears", but it makes pitch movements rather willingly and, perhaps, sharper than typical "after-school" wings. The amplitude of pitch motions in a strong turbulence may be impressive at first - but practice has shown that the Pluto is able to withstand rolls up to about 60 degrees without folding. Naturally, with such powerful pitch dynamics the Pluto is very informative. Even a novice pilot can understand what's going on with the air around the wing. And it's not just the pitch, the Pluto is very informative in terms of airspeed and brake loading. One might get the impression that the Pluto is brutal and even evil - but the abundance of information transmitted to the pilot has nothing to do with the likelihood of "catching" this or that dangerous mode, and in terms of resistance to collapse the Pluto is clearly superior to many of its "classmates". Moreover, it is very difficult to accidentally break the Pluto because of the high load on the brakes and their large (even by the standards of "after school" equipment) travel. Frankly speaking, for the first minutes of my acquaintance with the wing (and it was held in very strong weather) I was a little bit puzzled, to say the least, by the behavior of my test, butbut very quickly understood that there was nothing to be afraid of, and after half an hour of flight I started to get impudent, to drive through the streams with full gas pedal, to spin on the knife, etc. All this with the clear understanding that the machine has every right to punish the pilot with a couple or three hard knocks. And yes, I finally managed to get Pluto to fold. But the "asymmetry" of 30-40 percent, opening quickly and smoothly when releasing the gas pedal is not at all what I expected and feared. Even at maximum speed, the asymmetric additions turned out to be quite humane. All in all, the Pluto impressed me once again!

Dynamics and power capacity. It's peculiar. On the one hand, Pluto stores more energy than on the average in its class. On the other hand, it is not in a hurry to quickly convert speed to height and vice versa. In this respect, the Pluto seems to me to be a very well and properly tuned wing. If you want or know how, it is not difficult to make the Pluto a powerful wing-over, or a ground-facing spiral. But even powerful maneuvers it tends to do so smoothly and gently, gradually releasing and storing energy. And that's a good thing.

Perfect. The smoothness of the transients means that you can control the entrance and exit of the spiral very well. No spiral neutrality noticed when descending around -10 m/s.

Good. The force on the arms is a little high, and there is a probability of "catching" a slight, but unpleasant sway. Decrease is within normal limits.

A very interesting and unusual device in its own way. Typical "after-school" pilots are designed for pilots who gradually discover the world of paragliding in all its aspects, starting with steaming and calm transitions at moderate speeds. And Pluto from the first minutes of acquaintance encourages - no, more likely even provokes! - to constantly and repeatedly use high speeds, as it is accepted in the world of absolutely sportive equipment. The flight on the first step of gas pedal for Pluto is practically a standard mode on the transition. You can safely use the second step not being afraid of being on the ground in a minute or two because of strong acceleration of descent speed. You don't have to worry about collapses at top speed - they happen rarely and in really strong conditions, and the Pluto gets out of them very well. Does all this mean that the Pluto can be bad at low speeds and in thermals? Surprisingly, no. It's perfectly fine. It's just that the strength of this wing is precisely in high-speed transitions. Probably the best fit for this sport aggressor is for very ambitious pilots, who from the beginning of their independent life as a paraglider want to fly as it is used in serious competitions. However, the Pluto is also quite good as a "normal after school wing". But an "average after-school pilot" with no discernible sporting ambitions is unlikely to understand why such a machine is needed and what to do with it. Perhaps the Pluto will do best in strong mountain conditions, where the ability to fly at high speeds without fear of collapse is often the key to a decent sport performance. the minimum flight time required is about 5-10 hours; for talented pilots without obvious motor problems it is also suitable for training from scratch.

I would like to thank my Axis dealer in Russia Sergey Kostromitin for providing me with a paraglider for testing.